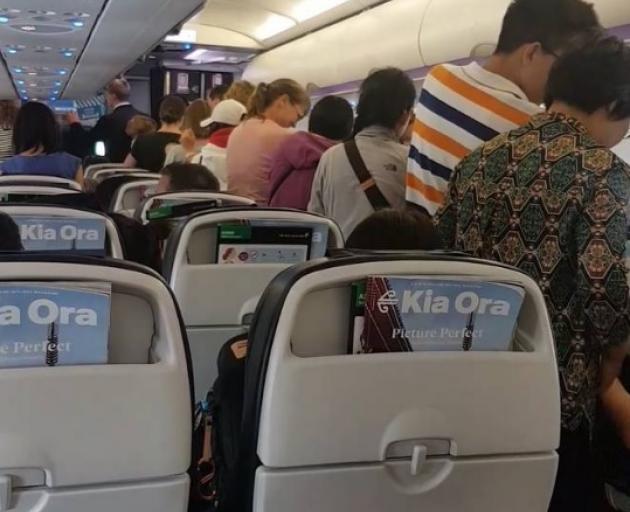 Last Wednesday, an Air NZ flight from Auckland at 2.20pm had to be redirected to Christchurch after strong tailwinds prevented it landing at Queenstown.

Joel Herbert and Kimberly Davis were on board with their 16-month-old baby and said what happened on the Christchurch airport tarmac and from that point on was a "shambles".

After refuelling the plane for 40 minutes with all the passengers on board, Air NZ made the decision to fly back to Auckland Airport where they had taken off hours earlier.

Queenstown resident Herbert described scenes on the plane after the announcement they were returning to Auckland as bedlam.

"People were losing their minds, they were incredibly angry, particularly people who were coming in from overseas, who only have a finite amount of time in the South Island, they'd lost an extra day," Herbert said.

"It was a mixture of anger and disbelief. I don't think there was a single person aboard who could understand why we would have to return to the other end of the country rather than be redirected to another airport. I mean we're already in Christchurch.

"The plane, A320, doesn't have the facilities to cope with that many people being stuck aboard for that long, so basically there was a queue for both of the toilets from both ends of the plane the whole way back."

Herbert said passengers were given no explanation "at all" for redirecting all the way back to Auckland.

An Air NZ spokeswoman told the Herald the reason passengers could not disembark in Christchurch was because the plane was parked at an international gate.

This meant the passengers would have needed to make their way through Customs on arrival, which Air NZ said was not usual process for customers travelling domestically.

"Customers were not offered the opportunity to disembark in Christchurch as this would have caused significant further delays for the majority of customers still onboard while the corresponding baggage was located and offloaded and clearance was arranged through Customs," the spokeswoman said.

After touching back down in Auckland around 7pm, five hours after they first departed, the passengers of Air NZ flight 623 were booked into the Holiday Inn airport hotel for the night and put on a flight back to Queenstown for the next morning.

However, while the hotel was paid for by Air NZ, Herbert says there was no further compensation from the airline, and no extra meals were provided.

"We had a 16-month-old child with us. We were at the end of a holiday, we only had enough food, provisions for that day, not to spend an extra day," Herbert said.

"The airport Holiday Inn is not the place to get provisions for an infant, so there was a lot of inconvenience caused by redirecting all the way to Auckland."

Kimberly Davis said the entire ordeal was not the level of service they expected travelling Air NZ.

"One of the reasons it was really disappointing is we fly Air NZ not to be treated like cattle, and that's really what we felt like while we were sitting on the tarmac," Davis said.

"They wouldn't let people go change their babies, or get more food."

Herbert said flying back to Queenstown a day later on February 7 cost him a day of work also.

The Air NZ spokeswoman said as much was done to make the passengers' redirected flight tolerable, including making tea, coffee, water and snacks available to passengers.

"We don't carry baby food on domestic flights but crew offered milk to the parents of two babies onboard. Both babies also had food available to them," she said.

"We believe our people did the best they could under a challenging set of circumstances. We appreciate that this was a frustrating and disappointing situation for our customers and we thank them for their patience."

As shocking as this is, there must have been a lapse in communication. Sounds awful.

Identifying passenger needs and dealing with them is not rocket science.

You must disregard routine practice, get them through any portal available, close customs for that deplane, and bring in on call staff to assist.

Yeah, cos Dunedin Airport is further away than Christchurch from Queenstown, so it makes sense to fly to Chch instead...

This seems to happen a lot, maybe Q-town airport could set up some sort of arrangement with Dunedin Airport for Queenstown bound flights than cannot land due to weather etc.

They most likely had to go back to Auckland because there was no accomodation available in Christchurch, it's Chinese New Year so everything is full. The following flight from Auckland couldn't land either and went back to Auckland after 3 attempts. It's doubtful Dunedin or Invercargill would have been able to accomodate a full flight or have the bus capacity to get everyone to Queenstown, and then the passengers wouldn't have got to bed any sooner than flying back to Auckland.

The question that needs to be asked is why fully loaded flights have difficulty landing at Queenstown in fickle winds.