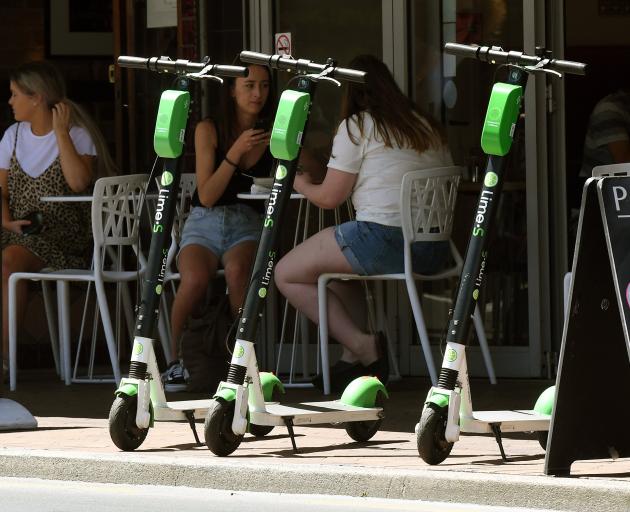 Lime scooters are parked on the footpath in George St, Dunedin. Photo: Stephen Jaquiery
An Auckland electric scooter advocate wants to raise awareness around riding them downhill after a nasty incident saw her fly over the handlebars.

Hayley Gillespie was riding a Lime scooter near the pink Nelson St Cycleway when the front wheel inexplicably locked up and she was thrown forwards.

The incident took place in the morning on her way to work and other members of the public quickly came to her aid.

"It was going about 20km and I tried to brake and the front wheel just locked," she told the New Zealand Herald.

"I just had cuts and grazes on my feet, I haven't actually been checked out properly yet but I have a dodgy tailbone.

"It was more of a shock to the body and the jolt of it, I was off work for quite a few days."

Earlier this year, Lime scooters in Switzerland had to be recalled following reports the e-scooters were braking without warning.

Three people were injured as a result, one breaking an elbow, another dislocating a shoulder and a third person suffering grazes.

A spokesperson for Lime confirmed the company had become aware of operational issues with a limited number of their e-scooters recently.

"While the issue is still under investigation, user safety is our first priority and the affected scooters have been removed from circulation," they said.

"In the meantime, we are in the process of rolling out early detection and additional preventative measures for our global fleet."

Gillespie said she was still a big fan of e-scooters but wanted others to be aware of the danger on hills.

She hasn't contacted Lime about her fall yet but plans to and wanted to share her experience for the benefit of others.

"You see people everywhere on them on hills, it's just about knowing that's a possibility your wheels could block and you could just fly."

'"While the issue is still under investigation, user safety is our first priority and the affected scooters have been removed from circulation," they said.'

These scooters have more than one brake, a little common sense in which one to use going down hill wouldn't go amiss.

The machine should be fully functioning.

With the right to sue, the company would be more focussed.