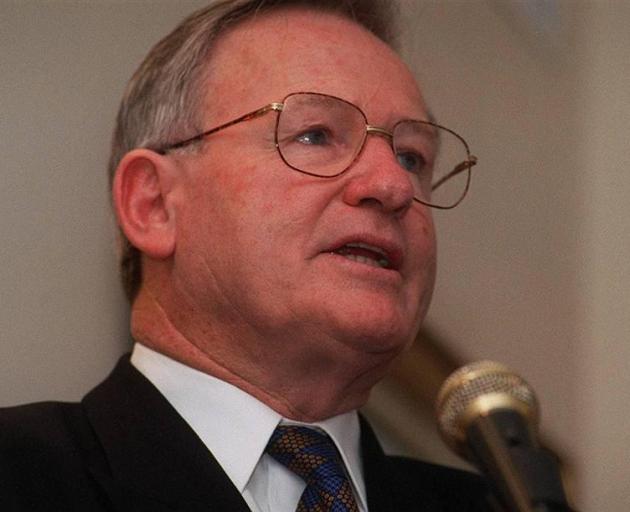 Jim Bolger
The Green Party has a responsibility to negotiate with National if it wants to clean up New Zealand's environment, former National Prime Minister Jim Bolger says.

The party's reluctance to consider a blue-green coalition because it could go the way of the Maori Party was "pathetic", Mr Bolger told TVNZ's Q + A today.

Green Party leader James Shaw has not ruled out talking to National about forming a Government, but has said that his party campaigned on changing the government and many of National's policies were "incongruous" with Green values.

Senior National ministers, meanwhile, have floated the idea of a National-Green coalition as an alternative to forming a Government with New Zealand First.

Mr Bolger, who negotiated a National-NZ First coalition in 1996, said the Green Party had "exactly the same capacity" as NZ First to influence the outcome of the election.

"What I'm really hoping is that the Green Party will step up and accept that opportunity, or I would term it responsibility.

"If they're in the political mix and campaigned to have an influence on the Government, then they should as another small party talk to both sides."

The concern among some Greens that the party could lose its identity and crumble like the Maori Party or National's other support partners was a "pathetic argument", Mr Bolger said.

"So you have to go into government if you're going to influence the outcomes."

Mr Bolger cited the German election - which took place the day after the New Zealand general election - and said there was no doubt that the German Greens could go into government with Angela Merkel's centre-right party. New Zealand's Greens, however, have previously pointed out that Ms Merkel's party has a much stronger environmental record than the National Party.

National's deputy leader Paula Bennett floated the idea of a National-Green Government on Friday, saying her relationship with the Greens was "great" because of her work on climate change. Other senior ministers also spoke positively about the Greens during the election campaign.

Bolger said negotiating with the Greens might not necessarily be easier than with NZ First, and could be "quite tense".

"But the broad parameters of what the Greens are arguing for ... is climate change, well, New Zealand has signed up to the Paris Accord on that. Can we go faster? Well let's discuss that. Should we enshrine something in legislation? Again, that's an open discussion. People want clean waterways and rivers, well, New Zealand farmers with no thanks or money from anybody else have built a fence from here to New York to fence off the waterways of New Zealand. Is there more than can be done? Always."

Most people advocating a National-Green coalition come from outside the Green Party.

But former Green co-leader Nandor Tanczos said yesterday that it should be an option in future elections, if not this one.

In a blog post, he said that forming a government with National this year would be "both impossible in practical terms and politically suicidal".

It would be a huge betrayal to go with National because Green voters supported the party on the understanding this would not occur, he said. Furthermore, any coalition deal needed to be approved by 75 per cent of Green members, which made it near-impossible.

However, Mr Tanczos said the Greens "must be prepared to seriously consider the idea" of a coalition with National at some stage.

"If Greens cannot carve out a constituency beyond the 'left of Labour' cul de sac we are in, we will continue to play out the dynamic of this election over and over, soaring in the polls only as long as Labour is doing badly, but dropping back to 5 per cent as soon as Labour turns left again. Or finds a charismatic leader.

"We may be mighty in opposition, but we will always be puny in coalition until we stop relying on discontented Labour voters for support."

Oh for goodness sake we do not need people with skewed ideas like Nandors Tanczos in the Green party anymore...enough now already! Well said Jim Bolger indeed the Greens have a responsibility if they actually want to make a difference. I do not want any more Green members with poor priorities, like smoking marajuana & making Te Reo in Schools a priority, when there is Childhood sexual abuse & Green issues to concentrate on! Children can learn about culture & respect in multiple ways. There are serious issues to deal with.
People have been very polite so far James Shaw - we want you & the Greens to feel supported but please - realise this opportunity is not going to last. Greens - do not be swayed by political agenda. It is not political suicide if you get in & work hard to do a good job, there are plenty of sensible people to back you - who will vote for you Greens! If you have not seen the petition yet/added your say here it is: https://www.change.org/p/bill-english-james-shaw-show-your-support-for-t...