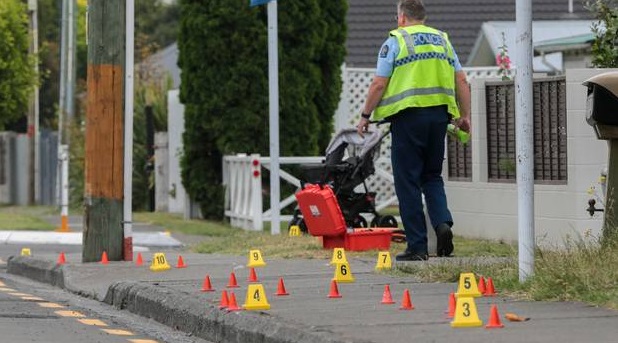 Police at the scene in Hastings. Photo via NZ Herald
A man who pushed a toddler in a pram to safety before being hit by a car remains in a critical condition in Hawke's Bay Hospital.

The driver of an older model Mazda 323 crossed on to the wrong side of Hastings' Maraekakaho Rd just after 9.30am on Saturday, before ploughing into a group of people - including a toddler in a pram on the footpath.

A man in his 50s managed to push the pram out of harm's way but he was himself critically injured.

The car sped off and was last seen by witnesses travelling south down Marekakaho Rd.

A woman, believed to be the mother, has commented on social media that police have since found the offending driver after his vehicle crashed into a ditch in Flaxmere.

However, police yesterday confirmed they had found a car believed to be involved but were still seeking the driver who remains on the run.

Resident Joyce O'Callaghan earlier told the New Zealand Herald how she was inside her nearby Lowe St home when she heard a car "speeding around the corner" on to Maraekakaho Rd, and then a "big bang".

A neighbour later told her one of two men with the baby had saved the infant's life, O'Callaghan said.

The woman told O'Callaghan she was busy pulling open her curtains when she saw the crash.

"She told me there was a man pushing a pram and he tried to save the baby by pushing it away, but he was very badly injured."

After going outside, she saw a man lying on grass next to the footpath.

A hospital spokeswoman yesterday the man remained in a critical condition in its intensive care unit.

The toddler has been discharged from hospital.