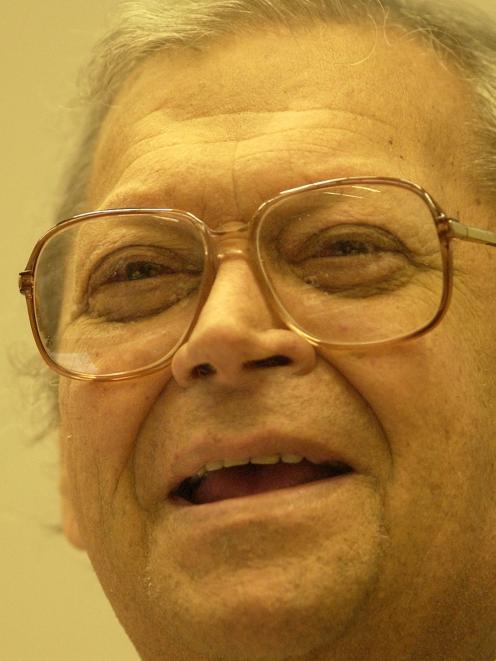 David Lange. Photo from the NZ Herald.
David Lange's former chief adviser Gerald Hensley has come to the conclusion the former prime minister lied about his early involvement in the anti-nuclear crisis that gripped the fourth Labour Government.

But Mr Lange's widow, Margaret Pope, says her husband never trusted Mr Hensley because of his views on Anzus and she is sceptical about how he will be portrayed in his book.

''David inherited him from [former Prime Minister Rob] Muldoon and he did not trust him and he wanted him to go but Gerald would never take the hint,'' she said.

''The reason why he didn't trust him wasn't anything to do with Gerald personally but because he was so much of the world view that said we had to be in Anzus, no matter what.''

The old nuclear wounds are being reopened with the publication of Friendly Fire, by Mr Hensley, on how the nuclear policy led to the collapse of the Anzus pact.

Mr Hensley was then head of the Prime Minister's Department and worked closely alongside Mr Lange and the United States over the first proposed US ship visit after the 1984 election.

Labour had been elected on a dual policy of being nuclear free and remaining in Anzus, the security pact signed between the United States, Australia and New Zealand in 1951.

Mr Lange dispatched his Chief of Defence Force, Air Marshal Sir Ewan Jamieson, to Honolulu to discuss the actual ship with the US Pacific Command. New Zealand was given a choice of ships and Air Marshal Jamieson settled on USS Buchanan, an almost obsolete destroyer which, while capable of carrying nuclear weapons, almost certainly would not have been (it was decommissioned in 1991).

Mr Lange agreed with the US ambassador in December to receive a request the following month for the USS Buchanan to visit.

News of the US request leaked while Mr Lange was overseas and it became evident he had not briefed any Cabinet colleagues on what had been planned by himself, the defence chief, Mr Hensley and the Secretary of Foreign Affairs, Merwyn Norrish.

The then Acting Prime Minister, Geoffrey Palmer, handled the furore that broke out. He took the view that he needed to be convinced beyond reasonable doubt that it was nuclear free. He wasn't convinced, so recommended the request be declined by the next Cabinet meeting which Mr Lange arrived just in time to attend.

The decision to reject the Buchanan, which led to the collapse of Anzus, was taken with no Cabinet papers circulated and no discussion.

Mr Hensley said the big surprise for him, Mr Norrish and Air Marshal Jamieson was that Mr Lange had not spoken to any of his colleagues.

''We had naturally assumed that while we were working on the Buchanan visit, he was briefing at least his senior colleagues, as you would expect in that situation.

''At one stage Merv offered him a draft Cabinet paper to bring them up to date with the progress of negotiations and he waved it away and said, `I'll brief them myself.' He never did.''

But the bigger shock for Mr Hensley came during research for the book. He said not only had Mr Lange told colleagues he had known nothing about the Buchanan until he had returned from Tokelau but he also told some that it had all been the work of Mr Hensley, Foreign Affairs and Defence.

Mr Hensley said the discovery made him feel ''a bit sad''.

''He was such a warm, humorous, human man and I knew that he embroidered things, altered them round to make a better story, but I hadn't actually thought of him being an actual liar.

''But I'm afraid you really can't use any other word for this. It was a conscious lie to protect himself in the debacle that followed the collapse of the Buchanan visit. And I was a bit shocked.''

Ms Pope, initially Mr Lange's chief speechwriter, wrote to a newspaper in 1994 saying the PM had not known about the Buchanan until he got back from Tokelau, but she had since acknowledged that was not so.

She and former Prime Minister Helen Clark were the only two major players of the time who would not talk to Mr Hensley for the book.

Of Miss Clark, Mr Hensley told The Herald there was evidence that she controlled and directed Labour's anti-nuclear policy which led to the Anzus rift.

''There is no doubt from David Lange's comments to a lot of people, certainly including to me, that he was pretty angry with her all the way through for having pushed him, as he saw it, into these things.''

Ms Pope said she hadn't wanted to speak to Mr Hensley because she had not been a key figure.

''Gerald, I suppose, has lumped me in with [Labour president] Margaret Wilson and Helen Clark and all the other rampant radicals. But the Labour Party was very agitated.

''But I wasn't agitated and I didn't belong to the left of the Labour Party. So I have absolutely no interest in helping Gerald reinvent history in which he and the Establishment play the heroes in their cause, ignoring what the electorate has actually voted for and doing what they saw was best for their country, and makes David out to be a villain or pantomime figure to explain away why they thought they knew better than the Government and the public.''

The blurb by the publishers, Auckland University Press, said the book would take you inside the Labour Party.

''The idea that Gerald Hensley would have the slightest idea in the world about how the Labour Party worked and where the bodies were buried and who did what to who is just unbelievable,'' Ms Pope said.

She said the 1984 election had the two policy planks, to be nuclear-free but to remain in Anzus.

''We know now that the Americans took the view you can't have both. You've got to be out of Anzus and nuclear free or in Anzus and you are going to have nukes.

''David didn't know that then and he made a genuine attempt to try and get that kind of settlement,'' she said.