Auckland will move to level 2 on Wednesday.

She said the two recent deaths and third earlier death connected to the Auckland cluster were a sad reminder of how serious the virus is.

Tests proved the virus had not spread beyond Auckland and Ardern said that proved the Government's approach "was the right one".

Acting swiftly had worked which meant restrictions could be eased, she said.

When the moves happen:

Auckland would remain at level 2 for 14 days. But the move meant events with up to 100 people would be able to be held.

While at level 2 Aucklanders should not go to events with more than 100 people when they travelled outside of the city.

Until the change on Wednesday Auckland remained at a heightened alert level 2, dubbed level 2.5, with gatherings capped at 10 people except for funerals and tangihanga which are allowed 50.

"Essentially Auckland needs more time ... there is still a need in Auckland for a cautious approach."

Auckland moving to level 1 would be dependant on there being "no surprises" and trends continuing on there current trajectory.

There could still be further cases though.

The Government had already agreed in principle to move New Zealand down to alert level 1 and Auckland to alert level 2 with eased restrictions on gatherings but the final decision was made today.

In Auckland, face coverings will still be required on public transport and on planes to, from or through Auckland.

At the start of today's briefing director general of health Ashley Bloomfield said there were no new cases of Covid-19.

On the man who tested positive after being in managed isolation, Bloomfield said modelling backed up the current quarantine timeframe and testing.

The mystery case should be commended for his actions, said Bloomfield, and he thanked him and his family for their "quick-thinking" as it saved the virus from spreading further.

Three neighbours of the man, identified as close contacts, have all returned negative tests. 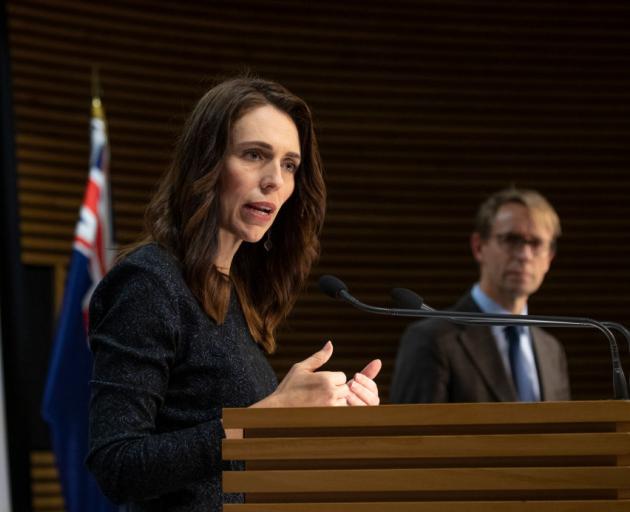 There were 86 people on his charter flight from Christchurch to Auckland are being contacted. People sitting in rows near him are all being tested.

Bloomfield said the man could have been infected on his flight from India as there were eight other cases on that flight.

Other possible scenarios are that he was infected during his time in isolation and CCTV is being reviewed, as well he could have been infected on the charter flight. Officials weren't ruling anything out, said Bloomfield.

Ardern said she was "confident we will be able to answer the question" of the mystery case.

She said the most likely outcome was the mystery case caught Covid-19 on his flight from India.

The Government was getting advice on whether they needed to do some risk-profiling of returnees or implement another test, said Ardern.

The tests could be for those who'd been on a flight where there's been cases of if they came back from a high-risk country, but for other people coming back from places where there are zero cases like Brisbane they wouldn't be needed, she said.

The Government is leaning towards additional testing, rather than extending the period of managed isolation.

Bloomfield said he'd spoken to epidemiologist Michael Baker this morning about his recommendation for "alert level 1.5" with masks still mandatory and he'd taken it on board when he recommended masks still be encouraged in places where social distancing wasn't possible.

Meanwhile, there are three people in hospital.

There are 62 active cases - 29 are imported cases and 33 are community cases.

It comes after two new cases were confirmed yesterday - two in the community.

But physics professor Shaun Hendy, who has modelled the spread of the virus, said it was feasible to move down alert levels for the whole country.

He told Morning Report the new 'cluster' was a concern but would probably not affect Cabinet's decision today because "we caught it early".

"For the rest of New Zealand, face coverings will no longer be mandatory", err no they weren't, they were only for public transport, your (poor) choice of words suggests they were mandatory all the time.