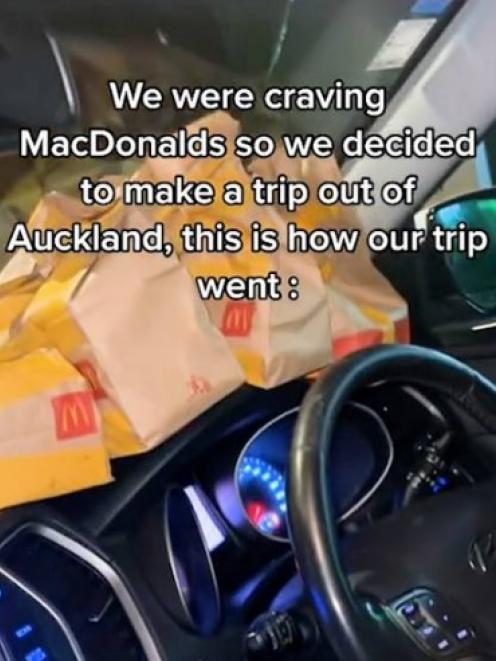 Photo: TikTok
An Auckland man who bragged about breaking lockdown rules and going over the regional border to get McDonald's has been charged with failing to comply with an order under the Covid-19 Public Health Response Act 2020.

The man uploaded footage showing the inside of the car full of McDonald's bags after what was allegedly a drive from Auckland across the regional boundary into alert level 2 for takeaways.

Police received reports of the video circulating on social media and have now taken "enforcement action".

The man reportedly initially told police the video was made "just to get views" and that they were essential workers in the Waikato region who had stopped for food on the way home.

However, upon further investigation, police found out that was not the case and that "no essential work was being undertaken".

"Instead, those in the video utilised an exemption, that was meant for essential work, to visit a fast food outlet. This is not a permitted reason to cross an Alert level boundary," the superintendent said.

"Police are incredibly disappointed by the choices made by those involved and blatant flouting of the current restrictions will not be tolerated."

The man has been summonsed over a charge of failing to comply with an order under the Covid-19 Public Health Response Act 2020.

He is expected in the Manukau District Court on October 6.