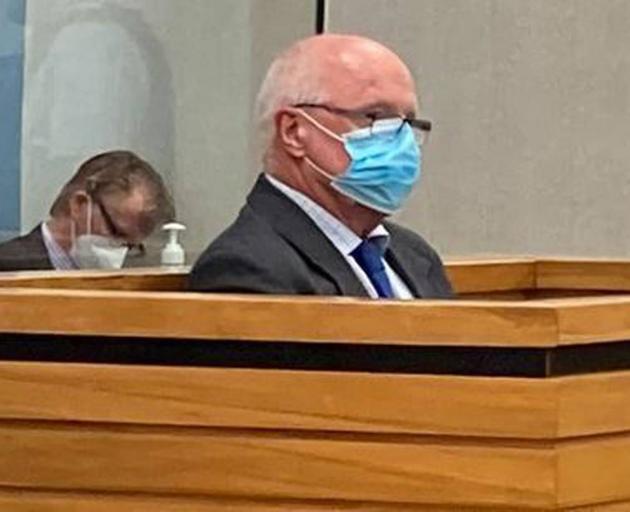 New Plymouth teacher Gerard Leo Clarke, 66, in the dock in the Hamilton District Court today. Photo / Belinda Feek
A man who pulled out and collided head-on with another vehicle, killing its driver, was seen driving erratically prior to the crash.

Gerard Leo Clarke, of New Plymouth, was heading south on State Highway 3 near the Berry Orchard at Piopio when the vehicle in front of him signalled to turn left.

Clarke pulled out into the opposite lane and crashed head-on into a vehicle driven by Taumarunui man Kevin Rule, 69.

Rule died at the scene while his wife, and passenger, Pauline, suffered serious injuries, including a broken sternum and ribs.

The couple were travelling in their Chevrolet Bel Air and were heading home after attending the Americarna muscle car festival in New Plymouth.

The 66-year-old teacher appeared in the Hamilton District Court this afternoon when he was sentenced on charges of aggravated careless driving causing injury and death after the crash about 12.40pm on February 23, 2020.

Clarke's counsel Jessica Tarrant told Judge Philip Crayton that he had always intended to plead guilty to the charge, however, there had been a delay due to the Crown upgrading the charge to dangerous driving causing death at the last minute.

After discussions, that was ultimately reduced to aggravated careless driving.

She said Clarke, supported in court by family members, was "suffering many demons" over what happened.

He was remorseful and had offered to pay $8000 emotional reparation to the Rule family today.

"I can say it in no way equates to the loss for Mrs Rule and her family. It is to show that he is very remorseful and sorry and they can use it for whatever they like," Tarrant said.

"To be quite frank the offending was quite tragic and devastating."

Judge Crayton acknowledged the emotional harm reparation and also that it could never be a reflection of the Rule's family loss, more "a token of your criminal responsibility".

The occupants of the vehicle Clarke had overtaken had also suffered from the crash, he said.

He noted that Rule had no time to react to Clarke's vehicle appearing in his lane and the impact occurring head-on, with his Chevy spinning and crashing into the vehicle Clarke had just passed.

That driver described Clarke's driving as "erratic" and that he had been "tailgating" him on the journey south, while a vehicle travelling behind Clarke noted he was veering far left and right in his lane.

Judge Crayton also acknowledged the impact on Pauline Rule which had seen their family plans for the future "utterly taken away". It had also affected her husband's flooring business.

"It's unsurprising that she describes what you did as having the effect of ruining her life.

"As an intelligent man, you will understand that she finds it very difficult to reconcile what has occurred ... and to be able to directly forgive you."

In coming to his final sentence, Judge Crayton noted that Clarke's driving wasn't just a momentary lapse, "it was an event which had poor driving before it".

The crash was due to either impatience or inattention.

"But either way, it was indicative of a significant and relatively prolonged period of carelessness."

He took a starting point of 12 months' prison before issuing discounts for his plea and previous constructive and pro-social character along with remorse.

The judge also took into account his age, health, emotional harm reparation and his completion of a defensive driving course, before handing down an end sentence of four months' home detention.

Clarke was also disqualified from driving for 15 months.