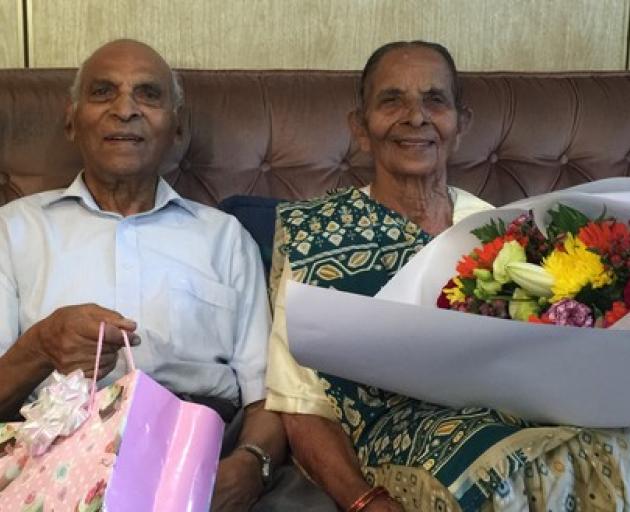 A couple married for 81 years has been awarded the title of New Zealand's longest married couple by lobby group Family First.

Auckland couple Jeram and Ganga Ravji have not only been married for more than eight decades, this year both will turn 100.

The Ravji's will celebrate their 81st wedding anniversary in two months, making them the longest married couple in New Zealand Family First could find.

"Although we can only go on the nominations made, we're pretty sure that the Ravjis are New Zealand's longest married couple," said Family First director Bob McCoskrie.

"As part of their award from Family First NZ, they will have a professional photo sitting with their extended family which includes six children, 15 grandchildren and 25 great-grandchildren all living in Auckland. The last family photo was 10 years ago at their 90th birthday celebrations."

He said the previous longest marriage Family First was aware of was a Christchurch couple who were believed to have celebrated their 79th wedding anniversary before the husband died in 2013.

Mr McCoskrie said the award was "an opportunity to promote marriage and honour married couples. We want to celebrate with couples who are setting the example for younger married couples just starting out."

The Ravji's lengthy marriage follows a betrothal in India when the pair were just 6 years old, nearly 94 years ago.

Born just a month apart, the couple wed several years later when they were both 19.

They moved from India to New Zealand 18 years later, shifting from Whanganui to Auckland in 1980 and now have four generations of family living in the city.

Mrs Ravji said she and her husband have learned to make sacrifices in their long marriage and that in every life you must learn to take the good with the bad and work through it.

One struggle the couple faced while still living in India was a period where Mr Ravji was imprisoned for 10 months after joining Mahatma Gandhi's Freedom Fighters and fighting against the rule of the British Government.

Mrs Ravji told Family First she was beaten by police often during her husband's time as a freedom fighter in attempts to get information out of her about his location.

Despite this part of their history, both said they were looking forward to receiving their letter from the Queen when they turn 100 in May and June respectively this year.