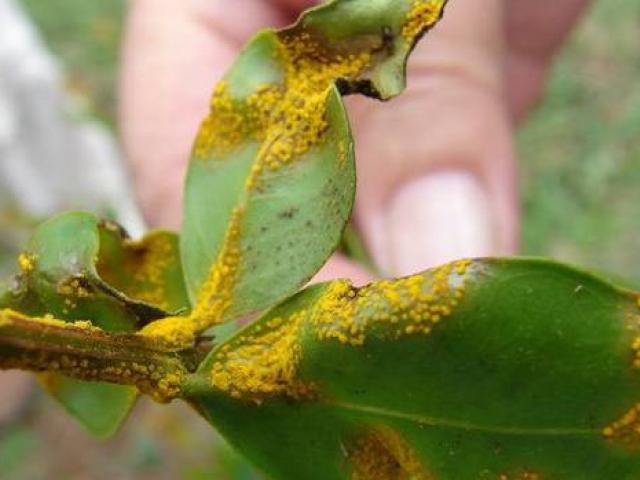 Myrtle rust is a fungus that poses a major threat to many myrtle species plants, including New Zealand's cherished pohutukawa, manuka, kanuka and rata. Photo: NZ Herald/file
Myrtle rust has spread to the South Island - the latest turn in what one leading ecologist has called a losing battle and a hard lesson for authorities.

The Ministry for Primary Industries (MPI) today also confirmed it had downscaled its approach to the windborne scourge to one of long-term management.

Myrtle rust is a fungus that poses a major threat to many myrtle species plants, including New Zealand's cherished pohutukawa, manuka, kanuka and rata.

Since first being found in a Kerikeri nursery last year, the disease has spread to hundreds of sites across the North Island - and now to a home in Collingwood in Golden Bay and a commercial property at Pohara.

Elsewhere, MPI has confirmed infections on five properties at Omori on the southwestern edge of Lake Taupo, also a new region for infection.

Its discovery in Nelson meant myrtle rust has been found across almost all regions identified as most vulnerable based on habitat suitability and wind patterns.

"When myrtle rust was first discovered on mainland New Zealand in May last year, we said it would be a challenging disease to contain and eradicate but we would give it a good crack," MPI's myrtle rust response spokesperson Dr Catherine Duthie said.

"There has been an enormous operational effort over the last 11 months, but the windborne nature of the disease means that containment has not proved possible.

"We have signalled for a while the likely need to change gear from intensive surveillance and the removal and destruction of host plants, to one where we look to manage the disease over the long term."

Because of the windborne, pernicious nature of the disease, it was expected there were likely to be many more infected sites beyond the more than 540 found so far.

One assessment produced by the Government in 2011 warned large areas of the country could be affected and, at one extreme, some species could die on a "landscape scale", as had happened in other countries.

Other experts have suggested New Zealand could lose some particularly vulnerable species like Bartlett's rata, particularly as they existed in the wild and because there were only a few individual plants left.

Landcare Research ecologist Dr Andrea Byrom, who directs the New Zealand's Biological Heritage National Science Challenge, doubted whether there had ever been any hope of defeating myrtle rust once it spread here.

"Hindsight is a great thing but it really was a losing battle, partly for biological reasons - it's a windborne pathogen, and we are going to get hit by these things more and more.

"But partly, it was also for systemic reasons - there probably wasn't a plan in place, so let's treat this as a learning exercise."

Byrom said biosecurity officials should now be looking at how they'd stop the next big incursion - which could come in the form of rapid ohi'a death, a feared disease that has ravaged hundreds of native pohutukawa in Hawaii.

"That's the kind of thing we should be planning for - and we should be doing it much more proactively than we did with myrtle rust.

"To be fair to MPI, they did try, it's just that New Zealand as a country wasn't ready - it all comes back to the fact we need to be better prepared next time."

The Herald is aware of frustration over the issue among other scientists - with some questioning why a specific strategy wasn't put in place when the disease was first found in Australia in 2010 - although MPI has stated it had long had a "well structured and rehearsed" system.

Duthie said the focus of myrtle efforts now had to be placed on a science programme designed to lift our understanding around the disease such as ways to treat myrtle rust, resistance and susceptibility, and to improve seed banking collection.

"A second key focus has to be on working with communities across New Zealand to support regional efforts to combat myrtle rust," she said.

"As we transition to long term management, MPI and DOC will be engaging with iwi and hapu, territorial authorities, the plant and nursery industries, and communities to support the development of regional programmes.

"This could include regional surveillance programmes, identification and protection strategies for taonga plants and special locations, advice to landowners, seed banking, and broad community engagement."

MPI and the Department of Conservation would hold meetings with iwi and councils in affected regions over the coming months.

"We think this regional and community effort is really important," Duthie said.

"One of the most critical things is for people to continue to report suspected infections.

"We need to keep tracking the spread of the disease so we can better understand how it might behave in New Zealand and what its long-term impacts might be.

"This will help us to understand resistance of native species and will be vital to our myrtle rust science programme."

People were encouraged to continue to report any possible cases to the Biosecurity Hotline 0800 80 99 66.

What is myrtle rust?

Myrtle rust (Austropuccinia psidii) has its origin as a tropical-sub tropical fungal disease of the Myrtaceae family (guava, feijoas, rata, pohutukawa, manuka) that "jumped" host range from natural Myrtaceae to planted Eucalypt forests in South and Central America and has spread primarily through biosecurity incursions.

It infects the leaves of the plants and it can be identified from its distinctive rust-like spots with yellow pustules.

Myrtle rust can distort the leaves of the plants, affecting function, but more devastatingly, it makes the plant susceptible to secondary infections within days of the primary rust infection.

It's primarily a windborne pathogen that has been helped along considerably through global movement of people and plants, particularly via the nursery trade.

On average one to two exotic windborne fungal rusts per annum have arrived autonomously in New Zealand from Australia since 1952.

New Zealand's climate and environment is very favourable: we are subject to strong prevailing westerly weather systems, and have close economic and travel ties with Australia.

Given this and increasing cyclonic events that have been attributed to climate change, myrtle rust was likely blown here during one of these weather events. 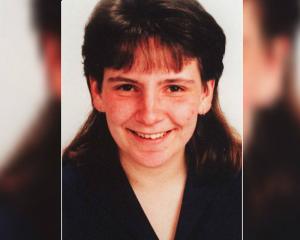 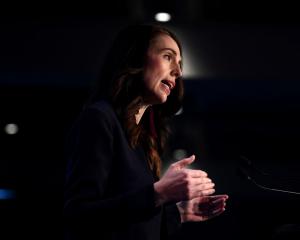