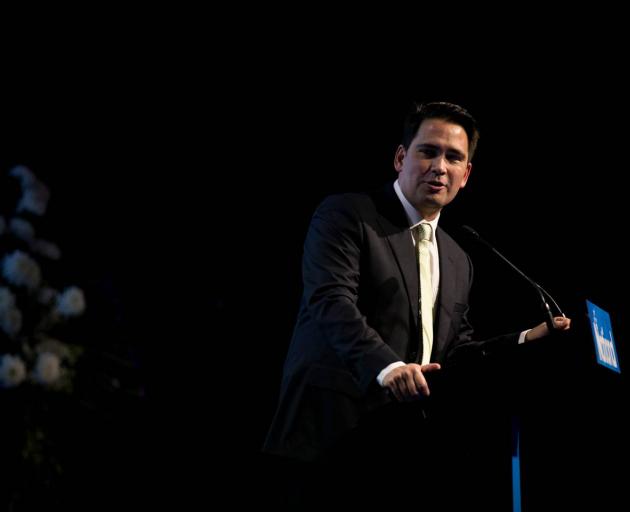 National Party leader Simon Bridges. Photo: NZ Herald
The National Party will vote against the first reading of the legislation which allows the enforcement of new rules under alert level 1 and 2, the New Zealand Herald understands.

Although the party understands there is a need for appropriate legal framework for operating within the different Covid-19 levels, it is understood National has major reservations that the bill going before the House this afternoon is too broad.

The bill is going through under urgency, meaning the first, second and third reading will happen tonight.

The Herald understands National will vote against the first reading, but are holding fire on committing their support in the second and third readings until the committee of the whole House stage of the bill, where the party will seek a number of changes.

But the bill is still highly likely to pass even without National's support in all three readings, as it has the support of Labour, New Zealand First and the Greens.

All National's MPs voted against the bill being rushed through the House under urgency.

Speaking to media before going into the House this afternoon, Bridges sounded the alarm over some elements of the bill – he said he "wouldn't rule out" National voting against the bill.

He said his MPs would attempt to get some elements of it changed through what's called the committee of the whole house phase.

This is where MPs can make last-minute changes to legislation before it becomes law.

Such changes, according to Bridges, include looking to increase the max gathering rules – bolstering the numbers from 10 to 100 across the board.

National also planned to change the bill to allow for funerals and tangi to be attended.

Bridges questioned why people would be allowed to go to the movies, but not to mourn a loved one.

"There can be sports games with physical contact and yet at one of the most tragic defining points of life, a funeral, direct family members cannot attend them.

"That's not just not kind – it's inhumane. We can do better than that."

The level 2 law basically gives effect to what was announced by Prime Minister Jacinda Ardern yesterday.

That means there is no select committee process, where the bill can be scrutinised by experts.

Attorney-General David Parker said the Bill would ensure controls on gatherings of people and physical distancing are still enforceable.

"There will be fewer restrictions under alert level 2 but those remaining still need to be enforceable. We don't want these narrower controls to rely on a National State of Emergency," he said.

Although he believes New Zealanders would 'do the right thing,' it's important to have a "regulatory backstop" to address behaviour at alert level 2 that is particularly harmful to the public health objective.

Funny. I always thought it would be right wing parties who installed a draconian police state... turns out it is labour and the greens.

it started on March 15th last year and theyre on a roll !

Interventionist government is not a Police State. Police blocking protest on Govt instruction is. A linear view of virus predicting 'subsidence' is irresponsible.

M Witt: hitting the nail on the head: the Labour/ Green Party government is so far Left that it is Right.
And people associated with the traditional Right, like David Seymour of ACT in Epsom and Michael Woodhouse of National in Dunedin are some of the few who are speaking up for thé rights of thé individual and classic Western European Enlightenment values. Winston Peters of NZ First seems to have misgivings, especially about tolerating Communist China’s human rights’ abuses , (and you would think the traditional Left would be screaming their heads off over that - but, no, silence - no doubt because of the supposed economic benefit of trade.) As Deputy Prime Minister, Winston Peters has a lot to lose. But IMO he has the guts - and the political power - to pull thé plug on thé Labour/ Green Party intention to pass DRACONIAN LAWS depriving New Zealand citizens of virtually every civil liberty.

It seems National have forgotten we are dealing with a virus that has a long tail. What we do now, may not appear in the stats for another few weeks. So we need to be cautious.

The reason Southern DHB had so many people infected was because a wedding where one person caused 98 infections, 12 of which are still considered active. Funerals risk the same level of infection as people from all over the country come together and hug and kiss. This a far greater risk than local strangers in a cinema.

Not voting for this legislation is just petty.

are you sure that your name isn't Twit? There is a big difference a public health emergency and a police state. If you want to experience a real police state just go on Holiday in the United States while being black or poor. You are right if National were in power then our response would look more like a police state. we sure were lucky that they[National] weren't in power when this virus came along or things would look a lot more like America than it does at present.

Hello? this a killer virus not a left wing takeover; then again, the New Zealand National Party never was big on science; here we are in the twenty first century; fear, ignorance and hysteria is still their stock in trade it seems; hey, most people can read these days so good luck with that.

Had they been in opposition, this rushed and draconian legislation would have been aggressively opposed by the Greens. Talk about a flexible moral code....

It was a voluntary lock down to start with, but now they simply want imprison you. It's raw power they want.

Section 20: Powers of Entry
An enforcement officer may enter, without a warrant, any land, building, craft, vehicle, place, or thing if they have reasonable grounds to believe that a person is failing to comply with any aspect of a section 11 order.

Non compliance: imprisonment for a term not exceeding 6 months

Now you know what it feels like to be a law abiding licenced firearms owner in NZ....