The National Party is calling for New Zealand to first end lockdowns then reopen to the world based on two vaccination targets.

The party's plan, which it says has been thoroughly vetted by experts, includes three "pillars".

The first pillar includes 10 actions for boosting New Zealand's response, the second is a 70-75 percent vaccination target for ending lockdowns and the third is an 85-90 percent target for reopening to the world.

The strategy aims for "vigorous suppression" of Covid-19, while accepting that elimination of the Delta variant and other strains like it may not be possible.

Announcing the plan this morning, National leader Judith Collins said the government's Covid-19 strategy had been largely successful, but it had taken its eye off the ball this year.

Judith Collins. Photo: Getty Images
She said the planned trial of at-home isolation was not a plan, "it's an insult, Kiwis have done the hard yards".

"Delta is here, it may not be possible to eliminate it, and it would almost inevitably arrive into the community again. Whatever happens, we need to reopen to the world and National's plan outlines how we can do that."

National's Covid-19 Response spokesperson Chris Bishop said the third pillar in the plan of reopening would reunite families and allow New Zealanders to travel overseas, boost tourism and international education, and "end the depressing and outrageous human lottery that is the MIQ debacle".

"Alongside the public health measures outlined in our plan, a milestone of 85 percent means we can manage Covid-19 coming through the border," he said. 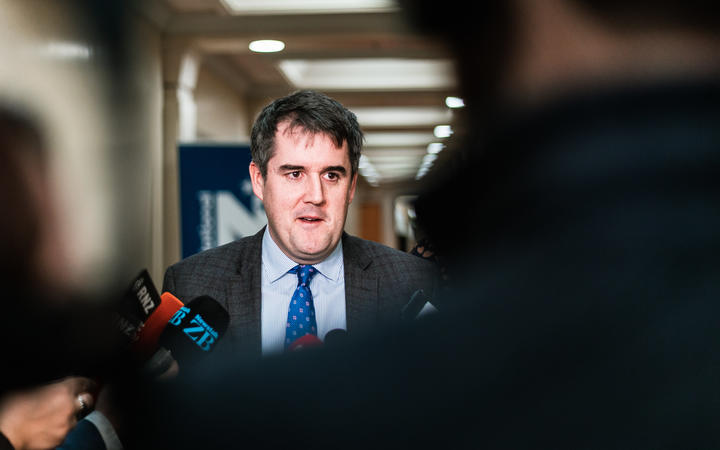 It would involve a traffic-light risk-based border system that would prioritise isolation-free travel for fully vaccinated travellers - a similar model to what the government has proposed - but the border would reopen once New Zealand reached 85 percent vaccination of 12+ age groups.

"The low-risk (green) pathway is for travel from jurisdictions where there is either no or little cases of Covid-19, and where vaccination rates are above 80 percent ... vaccinated travellers from these jurisdictions would be able to come to New Zealand with a pre-departure test and a rapid and saliva test on arrival at the port of entry," he said.

To achieve this, and the lower target of ending nationwide lockdowns after reaching a 70-75 vaccination, the 10-step first pillar includes several ideas National has repeatedly brought up in criticising the government's approach.

1. Supercharge the vaccine rollout
2. Order vaccine boosters
3. Upgrade our contact tracing capability
4. Roll out saliva testing at the border and in the community
5. Roll out rapid tests for essential workers and in the community
6. Create a dedicated agency, Te Korowai Kōkiri, to manage our Covid-19 response based in Manukau not Wellington
7. Build purpose-built quarantine
8. Launch a digital app for vaccination authentication
9. Invest in next-generation Covid treatments
10. Prepare our hospitals and expand ICU capacity

The first and most detailed step would target vaccinations towards South Auckland, Māori, and vulnerable populations, making better use of GPs, pharmacies, door-knocking in high-risk suburbs, and using vaccination in MIQ.

Young people would also be a priority, with school vaccinations and planning ready to go for vaccinating children aged 5-11, aiming for both to be complete by the end of the year.

It would also seek to commission behavioural scientists and economists to come up with incentives to get more people vaccinated.

Daily saliva testing would become mandatory for border workers and quarantine-facility residents, with a provider contracted to also perform the tests on arrivals from low- and medium-risk countries.

Meanwhile, rapid antigen testing would be provided for international arrivals, and rolled out to all essential workers and hospitals, with greater availability for the general public.

Bishop said they aimed to have rapid testing "ubiquitous in the community by mid next year".

Most of the other steps are fairly self-explanatory, but step 10 calls for preparing hospitals and ICU capacity. It would do this with immigration for the healthcare workforce; assessment and financial support for migrant nurses already in New Zealand; increasing student enrolment in healthcare including more post-graduate roles within hospitals focused on retention.

It would also fast-track new hospital wards and invest in new technologies.

National's Health spokesperson Dr Shane Reti said that instead of investing in ICU, the government had "frittered the Covid-19 Response Fund away and has focused on restructuring the entire health system in the middle of a global pandemic".

"The number of ICU beds has actually fallen since the end of April 2020 through to September 2021," he said.

New Zealand has a proportionally lower number of ICU beds than many countries throughout the OECD.

It comes a day after the ACT Party released its own plan on reopening the border, urging an end to regional lockdowns, and an overall strategic shift away from public health to wellbeing.

Following his widely discussed opinion piece at the weekend, former prime minister Sir John Key told Morning Report on Monday it was not over-the-top to liken New Zealand to North Korea, as he has, the government needed to state definite dates of opening and incentivise vaccinations.