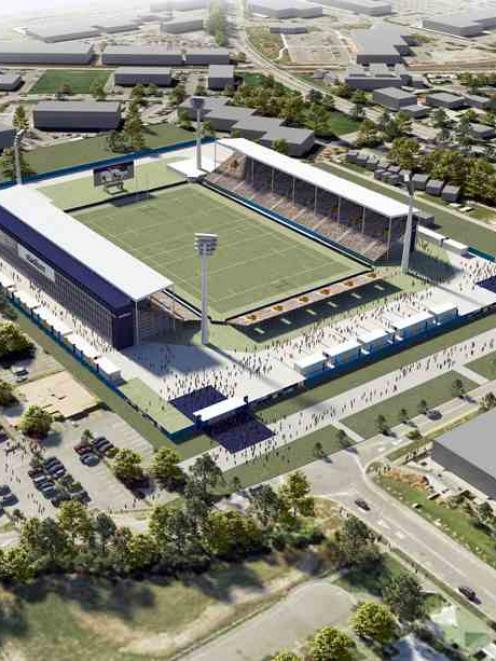 A new temporary rugby stadium in Christchurch to provide a home ground for test matches and local sports teams will be ready for the 2012 Super Rugby season.

The AMI Stadium and the stands at Rugby League Park were damaged in the February earthquake.

The new stadium will be on the site of Rugby League Park, where the current stands have to be demolished.

The plans were unveiled by the Prime Minister this morning in a marquee at the League Park in Addington. The NZRU also announced the All Blacks would play a test at the new stadium, against Ireland next year.

Mr Key said it was an important step for Canterbury, where the people loved sport and had a strong tradition of cheering their local teams.

"You can't do that when you don't have a local stadium."

It would be a home for many sports - including the Crusaders, and the Phoenix when in town.

The Webb Ellis Cup was on display at the announcement. NZRU chief Steve Tew, Canterbury rugby and league representatives, including Crusaders coach Todd Blackadder, were also at the event alongside Earthquake Recovery Minister Gerry Brownlee and Christchurch mayor Bob Parker.

Construction will begin next week and is due to end by March next year in time for the 2012 Super Rugby season.

The new stadium is intended as the medium term home for rugby in Christchurch until the future of the AMI Stadium is decided.

Mr Parker said a city was a lot more than roads and buildings.

"In this city sport goes right to the heart of how we define ourselves."