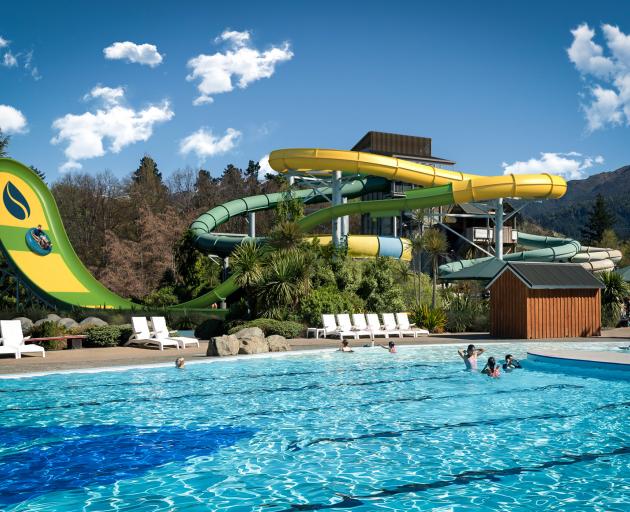 A $4.5 million development, including New Zealand's largest water slide, was officially opened at the Hanmer Springs Thermal Pools and Spa on Friday morning.

A class of very excited students from North Canterbury's Leithfield School were the first official riders, with 9-year-old Isaac Pond saying it was the best day off school "ever''.

Conical Thrill, a 13.5-metre high aquatic thrill ride and The Cascades, five new thermal pools, were opened by Hurunui Mayor Marie Black, who told those gathered that the assets would boost the regional economy.

Leithfield School's Year 3 and 4 class, Aniwaniwa, won a competition for the privilege of being first down the slide. Their entry was a moving and humorous video where they begged for the honour as they have a frog living in their own school pool.

There was no containing their excitement after the first run. 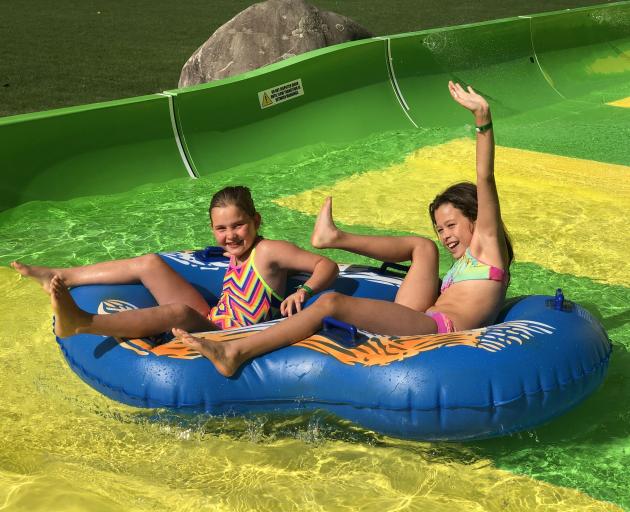 Leithfield School children Tahlia Bresson, 8 and Tenesha Hey, 9 took one of the first trips down the slide. Photo: Great Scott
"It was scarier than I expected but lots of fun. You go down the drop and then get a little bit of air,'' Isaac said.

The consensus was much the same for Tahlia Bresson, 8.

"It's so much fun. You go down and you think it's scary at first but then you get to the drop and it's really scary.''

The Cascades are five pools connected by a series of waterfalls. They are water-efficient, with no balance tanks. The pools are also built on timber frames, above ground, to protect the giant Redwood tree roots below.

Half of the energy required to run the new pools and slide comes from a heat transfer unit that utilises energy which is a bi-product of the electricity generator*.

"This is the end of more than three years of planning and construction. We're very proud of Conical Thrill and The Cascades and know they'll become popular features.''

The pools' complex is owned by the Hurunui District Council and Mrs Black said the new developments will help attract more visitors to the region.

"Economic development is a key focus of the Hurunui District Council, and this project reflects our current and continued vision to support the tourism industry,'' she said.

Mr Abbot said the new additions will be a drawcard for the complex, boosting visitor numbers to the alpine spa village.

"The new Cascade pools and Conical Thrill slide add enormously to our offering. We now have 22 pools and four hydroslides, making the complex a really desirable option for anyone - both here and abroad.

"It's amazing to think that all this has grown from a single thermal pool and a tin changing shed.''