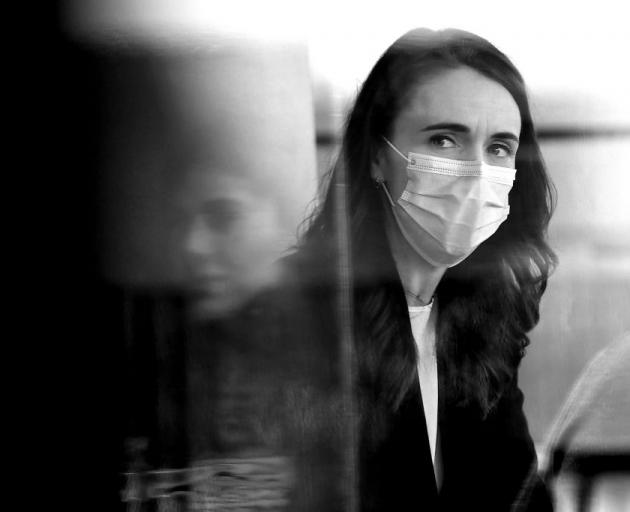 Few would disagree with the PM, even if New Zealand was shielded from Covid-19's worst during the pandemic.

New Zealand's success in fighting the virus has been well traversed.

Despite a number of small outbreaks in the last six months, a hard 51-day lockdown beginning in March broke the back of community transmission.

Ms Ardern's role in that success is also well-known, and she was handsomely and appropriately rewarded for it in October's election.

The Labour leader made Kiwi political history with her thumping re-election, claiming an unprecedented majority in parliament.

So while New Zealand's 2020 may have been horrendous, Ms Ardern is at the peak of her powers.

Labour's re-election was built firmly off Ms Ardern's Covid-19-fighting personal popularity, which has given her enormous political authority.

The 40-year-old's obvious charms extend across the Tasman too - a Lowy Institute poll found Ms Ardern was Australia's favourite politician.

Unsurprisingly, she is revered by her newly swollen caucus, which grew from 46 to 65 members in the poll win.

In October, at the first partyroom meeting of the new parliamentary term, Labour MPs were forced to lean on the wall as there weren't enough chairs. "Anybody who thinks they aren't here because of Jacinda Ardern, raise your hand," he asked the room.

The lack of hands in the air suggested MPs - unlike Australian Labor's factionally-riven ranks - understood their place in the pecking order.

The problem for Ms Ardern is that her well-earned authority will be put to the test by thorny policy and economic issues in 2021 - and her parliamentary majority means she must have all the answers.

This summer, the barbecue stopper issue is house prices and the growing gap between the haves and have nots.

Homeowners have experienced record capital gains this year, enjoying the benefits of vast monetary and fiscal intervention to prevent recession.

In October, the median Auckland house price hit $NZ1 million for the first time, up a whopping 16 per cent this year.

In most other regions, house values have surged beyond 20 per cent in a year.

New data shows some of the biggest rises have come in the poorest places.

The number of houses sold in November was the highest in 164 months, and a Stats NZ report earlier this month found home ownership levels were at their lowest levels in 70 years.

Naturally, renters or those eager to buy their first house have been incensed by the price rises, seeing the Kiwi dream fading in front of their face.

The PM has acknowledged prices "just cannot keep increasing at that rate" but neither she or Finance Minister Grant Robertson have yet to truly grasp this nettle.

COVID-19 has also hit the most vulnerable in society.

The Auckland City Mission believes more than half a million New Zealanders experience food insecurity, without enough food to eat on a regular basis.

Emergency food grants have exploded. The social housing waiting list has blown out.

All of this has kept welfare reform - and specifically the need to raise benefits - near the top of the political agenda.

"In the social services sector there is consensus that benefits are too low and need to be increased," Janet McAllister of the Child Poverty Action Group said.

"We were disappointed and concerned with the government's response. There's nothing there."

Following Ms Ardern's election win, campaigners including Auckland Action Against Poverty (AAAP) and ActionStation - a Kiwi version of GetUp - put her government to the test.

Joined by more than 60 other organisations, including unions, service providers, religious groups and women's groups, they petitioned the government for increased funding to beneficiaries before Christmas.

The request was not taken up.

"I don't see how the government is okay with printing billions of dollars that make investors and landlords more wealthy," AAAP's Brooke Stanley Pao says.

"If you put it into our community, of course they're going to spend it."

Ms Pao says Ms Ardern's government is out of touch, and "some people are really playing their communities".

"Once they're in a position of power they forget that these are the communities they've come from and are meant to serve as well," she said.

The rub on this too, is that Covid-19 and its economic follow-through threatens the very issue Ms Ardern cites as the reason she is in politics; child poverty.

"This government knows that it will not meet its child poverty reduction targets on its current settings because of COVID," Ms McAllister said.

"There was a query before Covid. Now it's clear.

"Increasing house prices is hugely counterproductive in terms of decreasing child poverty. It will increase inequality."

The government contends it has lifted income support, pointing to hundreds of thousands of singles and families that are better off, but its changes haven't turned the tide.

It remains to be seen whether Ms Ardern, with her increased authority, can find the right tonic for these political and policy puzzles in 2021.