The Cabinet will have to balance changes hoped to reduce prison numbers and the expected political damage around inmates who would otherwise be locked up carrying out high-profile crimes. Photo: ODT files

It's being called Labour's first great test as Government - signing off on a $1 billion mega prison that will allow our overflowing prison population to expand even further.

The problem is the nation's finest academic minds on criminal justice issues are warning it will have impacts that directly contradict all the promises made by Corrections minister Kelvin Davis when he was in Opposition.

In an open letter, 32 leading academics have urged the Government to reject the mega prison.

They warn the prison ignores international best practice, will lead to increased criminal offending, will be inhumane and "will undermine Prime Minister (Jacinda) Ardern's Waitangi Day commitments and intensify the mass imprisonment of Māori".

It comes as the Labour-NZ First government approaches a critical deadline with a paper coming to Cabinet early next month - and possibly next week - to seek approval for a massive expansion programme for Waikeria Prison in Waikato.

A decision to go ahead and expand the prison to hold up to 3000 inmates is expected to put our nation's penal policy on a track at odds with Labour's election promises.

But in making the decision, Cabinet will have to balance changes hoped to reduce prison numbers and the expected political damage around inmates who would otherwise be locked up carrying out high-profile crimes.

It will also have to deal with an expected increase in arrests with an additional 1800 police officers pledged by the new government. 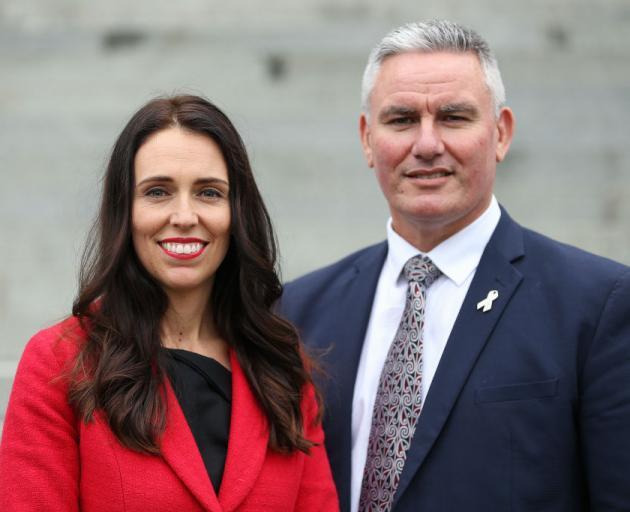 Davis was reluctant to comment ahead of the Cabinet decision but said in a statement: "Personally, I do not want to build another prison, I want to reduce the prison population and close prisons down but we do have to look at all the options, given the current situation."

He reiterated the Government's goal to reduce the prison population by 30 per cent in 15 years.

"The Government will not put public safety at risk but the solution to the rising prison population is not locking more people up. Each prisoner costs about $100,000 a year, which is a massive waste of taxpayer money.

"We need to get smarter about crime and tackle the underlying causes of offending - such as poverty, poor education outcomes, unemployment, mental health and addiction issues and a lack of housing."

The New Zealand Herald also sought an interview with Minister of Justice Andrew Little about proposed bail law reform - sending fewer people to prison before trial. He did not respond.

The prison system is widely considered to be at crisis point.

The open letter from academics across New Zealand said the billion-dollar prison would be "at odds with (the Government's) explicit commitment to reduce prison numbers."

It called for a halt on all new prison construction and "a national conversation about alternatives" with a prison population that had increased four-fold in 20 years and sent New Zealand's rate of imprisonment well above others in the developed world.

The letter is penned by New Zealand's leading thinkers in criminal justice, including the University of Auckland's Professor of Indigenous Studies Tracey McIntosh, Professor of Law Julia Tolmie and Victoria University Professor of Criminology John Pratt.

"Reducing prison numbers through bail or parole reform will take political will and leadership."

The current prison population at 10,695 and the NZ Herald has learned of extraordinary steps by the Department of Corrections to keep numbers down while expanding the space available.

Urgent building programmes are underway across the country with pop-up cells reopening in abandoned areas and double-bunking in places never previously considered.

Corrections has also focused energy on "soft options" to reduce numbers, such as working with remand prisoners who have literacy issues to make bail applications.

It has also seen Corrections management agreeing a special allowance of prison officers when the prison muster exceeds limits set for prisons.

The state of the problem is such it has created a degree of industrial harmony between management and the Corrections Association of New Zealand union.

CANZ vice president Paul Dennehy said the focus was on managing the burgeoning prison numbers, rather than workplace wrangling.

"Everyone knows the prisoners are coming. The question is 'how can we manage them in the safest way'."

In a submission to Corrections recently, CANZ president Alan Whitley warned cramped conditions was changing the culture and how prisoners lived.

The report stated: "We are signalling that the prisoners are becoming a more and more dangerous environment to work in and that the current safety practices are not enough.

Corrections chief custodial officer Neil Beales said there was currently capacity for another 300 prisoners - 2.8% of the current population - with a focus on creating an extra 900 bed spaces through building and double-bunking.

The crisis has come after the Ministry of Justice forecasts of the prison population proved to be wrong.

It has put the inaccurate predictions down to more prosecutions for serious charges, new laws to deal with domestic violence, new bail laws in 2013 sending more people to prison before trials and people spending more time in prison awaiting trial.

A police spokesman said there were no fixed plans as yet around the 1800 police, adding that "more police officers does not necessarily correlate with a net increase in arrests over time".

University of Canterbury criminologist Jarrod Gilbert said the Government was damned either way it went.

"The most important thing they have to do is to bring the public along with them."

He said criminal justice debates in New Zealand tended to be "knee-jerk" reactions rather than those relying on evidence - including in politics with both main parties chasing the law-and-order vote over the last decade.

He said former Prime Minister Bill English had made positive comments around reducing the imprisonment rate.

"But I suspect the National Party in Opposition will be a different beast. They will sense an opportunity."

Gilbert said the two main levers available to the Government to reduce the prison population were changes to the bail law - made by National in 2013 - and to the Parole Act - made by Labour in 2002.

"As soon as you lower those back and someone on bail or parole commits an offence - which in the nature of life is going to happen - you have a huge political problem."

"We see this as the first test of the Government's commitment to their election promises of reducing the prison population. It's a really difficult position they find themselves in."

She said the prison population had risen unreasonably and unnecessarily through criminal justice debates Labour had contributed to.

Some of those who would not otherwise be in prison might commit crime if they were not locked up and managing that would require leadership from the Government, she said.

"They need to comment up front - 'bad things will happen but we have to acknowledge the way we acted in the past has contributed to this problem'."

How many of the prisoners are in prison as a legalised form of kidnapping for ransom?