By Daisy Hudson
5 Comments
There were nine new cases of Covid-19 in the South as the New Zealand total passed the 1000 mark yesterday.

Prime Minister Jacinda Ardern took a cautiously optimistic view of the results at a media briefing, saying the country’s cases appear to have stabilised.

But she sharply criticised those "idiots" still breaching lockdown rules.

The Southern District Health Board remains the area with the most cases, at 160.

Of the nine new southern cases, four were in the Queenstown Lakes area, two were in Southland, two were in Invercargill, and one was in Clutha.

There were 58 cases linked to the Bluff wedding cluster, and 32 to the World Hereford Conference in Queenstown. 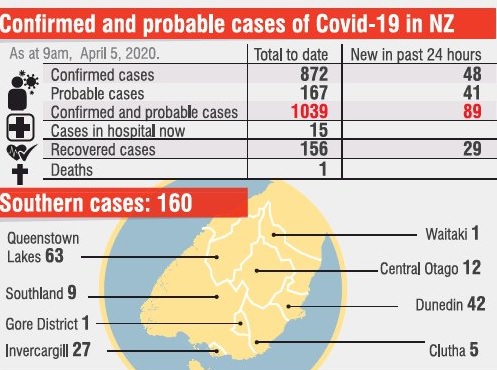 Fifteen people were in hospitals around the country, including one in the SDHB area.

Ms Ardern cited Google figures which showed changes in the number of visits and the length of stays at different kinds of locations, such as retail and parks, compared with a normal baseline.

The significant drops, such as a 78% drop in visits to parks, showed most people were sticking to the rules, she said.

Its figures for Otago show a 95% drop in retail and recreation visits, a 62% drop in supermarkets and pharmacies, and an 82% drop in visits to parks.

Ms Ardern said she did not want to draw "too many conclusions" but the number of cases in New Zealand had not grown exponentially as in other countries.

However, no decisions had been made about extending the lockdown.

The Prime Minister also hit out at those still flouting the rules.

Over Friday and Saturday, police had carried out 795 prevention patrols and 990 reassurance checks at essential services. 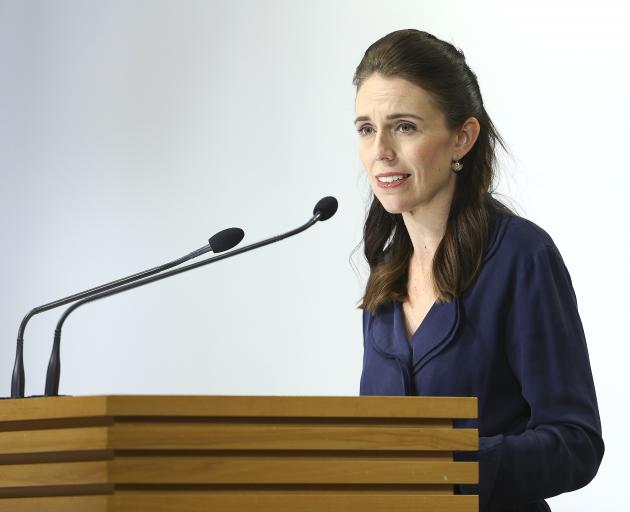 That included a Christchurch man who was arrested after filming himself coughing on people over the weekend.

He has been charged and will appear in court today.

In Warkworth, a 45-year-old woman has been charged with common assault after allegedly punching a supermarket manager in the face.

WellSouth chief executive Andrew Swanson-Dobbs said there was still good capacity for testing around the South.

As of yesterday, 2984 Covid-19 assessments had been done by primary care staff in the South, he said.

Of those, 1525 were done at community-based assessment centres (CBAC), and 1459 at general practices.

There were three CBACs in the South, in Dunedin, Invercargill, and Queenstown, and 81 GPs who were able to do testing.

Six GPs had also agreed to become designated practices, which meant they would assess patients who were not enrolled with a GP.

"There is a lot of room to move. We just need to keep monitoring what the case definition is," Mr Swanson-Dobbs said.

The irony of someone who has single-handedly pushed NZ into a new depression describing others as 'idiots' is truly hilarious.

Agreed. And the fact the term can equally be applied to her own Health Minister makes it doubly ironic.

and then you have those that are milder idiot's that have nothing better to do but to post mindless criticism.

Many more lives are going to be lost as a result of this Great Depression (including through the likely postponement of Dunedins new hospital) that will have been saved by this lockdown - assuming this lockdown does ultimately save any lives, for which there is no evidence. Our fawning media is 110% behind all and any government actions, irrespective of scientific or economic evidence, and there is no scrutiny taking place. Expert opinion is being cherry-picked, so that the doomsday scientists are being broadcast and those with a dissenting voice are being ignored. No account is being given to the lives that will be lost from this lockdown and consequent economic depression - from increased domestic violence, murders, suicides, unemployment, decreased life expectancy, underfunded health system, poor nutrition, etc. If anyone wants to read an articulate and informed dissenting view then suggest Peter Hitchen of the Mail on Sunday and Lord Sumption (https://www.dailymail.co.uk/debate/article-8163587/PETER-HITCHENS-Great-... and https://www.dailymail.co.uk/debate/article-8138675/PETER-HITCHENS-shutti...)

Agreed Coker, but if you repeat the lie enough, it will some how become the truth. From our 'One source of truth'...
Playing down this global virus, to suit her PR agenda and bringing the whole country to it's knees. Great if you have a government or local council job, not so great for the tens of thousands of small businesses that are deemed to be 'acceptable collateral damage'.