There are 94 new community cases of Covid-19 to report in New Zealand today, the highest number of daily cases since the pandemic began here in March last year.

Previously, there had been two days of 89 cases each, in early April 2020.

There are 2099 cases in the current Delta outbreak and 4794 confirmed cases of Covid-19 since pandemic began.

Auckland, the centre of the Delta outbreak, has been in lockdown for about two months and faces at least two more weeks at alert level 3, while neighbouring region Waikato's level 3 setting will be reviewed on Friday. Northland moves to level 2 tomorrow.

Eighty-seven of today's community cases are in Auckland and seven are in Waikato.

Director-general of health Ashley Bloomfield told media at a briefing this afternoon that 53 of the Auckland cases have yet to be linked, but all seven cases have been linked in Waikato.

There are 38 people in Auckland hospitals, including five cases in ICU or a high dependency unit.

A total of 84 Covid cases, across 55 households, are isolating at home.

Rules need to be followed: PM

Prime Minister Jacinda Ardern this afternoon acknowledged that highs and lows in cases is "incredibly hard" on people, but reinforced that New Zealand is not "powerless".

"The cases we are seeing right now are not confined to one part of Auckland, they are across 124 suburbs. The rules matter for everyone," she said.

She said the highest number of cases today are across the three age ranges that are the least vaccinated - 39 years and under.

"We need everyone who can be to be vaccinated. If you are young, you're sadly not invincible. Twelve of our current hospitalisations are under 39 years of age.  We all have a part to play."

Ardern said cases announced today were a result of "non compliance" of alert level 3 restrictions in Auckland and social indoor gatherings were a contributing factor to new cases.

She said she did not want people relying on vaccinations alone at this stage, and rules still need to be followed.

Ardern said 158,522 eligible Aucklanders had not had a first dose of the vaccine. She urged people to get their second dose also, if it has been three weeks since the first.

Bloomfield confirmed plans to offer a third Covid vaccine for some people.

Individuals aged 12 or older who are immuno-compromised will receive a third primary dose of the vaccine - different to a booster dose which will be available to the rest of the public, he said.

A new Covid-19 response framework was being finalised and details would be released on Friday, providing people with greater clarity, Ardern told RNZ this morning. 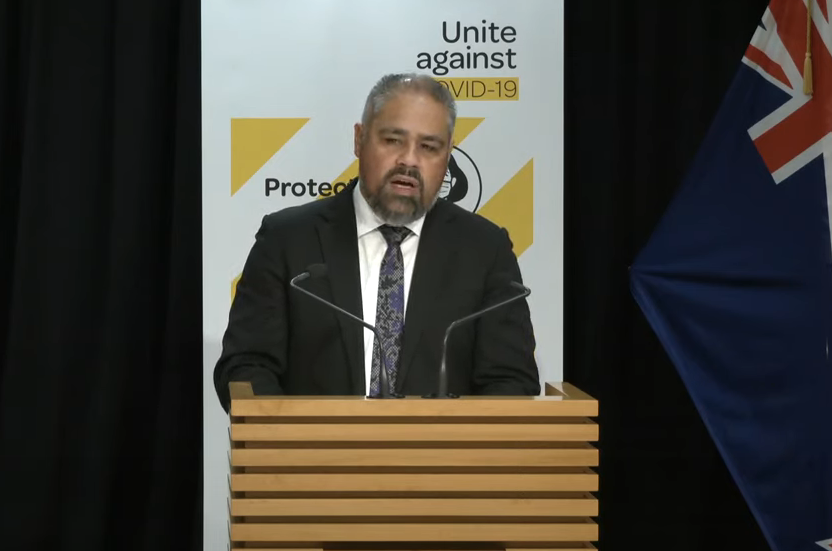 Challenges for Māori: 'Our whānau need you'

Associate Health Minister Peeni Henare talked about the vaccine rollout, including whether the Government had done enough to help Māori.

Public health experts have warned that young Māori are on the Delta frontline in Auckland as they are the most unvaccinated group, they make up the biggest share of the current active cases, and many of them live in the suburbs where the virus has become entrenched.

Only 66% of Māori nationwide have had one dose and 45% have had two doses, far lower than the national averages of 85% and 66%, respectively.

Henare said today that kaumatua and kuia were leading vaccination rates among Māori and there were 560 Māori Covid cases recorded in total.

That number was sobering, but reinforced why vaccinating the Māori community was so important.

"I say to the Māori people: Covid-19 is on the doorstep of your houses, do not let it enter. And the best course of protection still remains for us to vaccinate our people."

Vaccination was key - not just for Māori in Auckland, but everywhere else,  and the minister said he had noticed apathy in places outside of Auckland.

Henare thanked all Māori providers, iwi/hapū practitioners, vaccinators and staff in our DHBs that have worked tirelessly over the past 18 months on the Covid response and now as part of efforts to vaccinate Māori. "Your efforts are indeed seen".

In the two weeks before the 'Super Saturday' vaccination drive,  Henare said he visited several DHBs to understand the challenges and successes in the vaccine rollout to Māori.

"I saw some great work, but identified a number of challenges.

"We know too that primary care is critical for our whānau. To our GPs, pharmacists, practice nurses and practice support staff that are already on board, thank you so much for your help.

"For those that aren't on board, can I ask for your help too. Our whānau need you and for many of them you are the trusted person that will be key to them making an informed decision about the vaccination."

Ardern said the Government had been thinking about separate vaccination target rates for Māori, but providing all resource required was critical and they need to continue until "we reach everyone".

The Government was "honing in" on young people not yet vaccinated, and people outside of Auckland who "don't think it is real, or affects them yet".

Henare said challenges for Māori health providers included a lack of strong leadership among the community and in district health boards. He said, for example, in Taranaki there were complaints about the DHB response, but now 16 hapu are working with the DHB.

Henare said funding "sidestepped" DHBs in the beginning of the vaccine rollout to go to community health providers, but then a second lot of funding was directed at the DHB and that has proven "problematic".

Bloomfield said the Ministry of Health was addressing where support was not as good as it should be.

Ardern said the Government was "drilling down" into "relationship issues" in some areas.

Officials now needed to go out "street by street, town by town" and have conversations about the vaccine, and that required a lot of resources.

Officials had tried to have an equitable rollout of the vaccine, and there had been fantastic rates in some communities. She said in others they need to address issues, which arose before October.

Henare said it was not good enough that certain communities had to fundraise for mobile vaccine clinics and they were working to resolve the funding gap.

He said no one raised the issue of needing a mobile clinic when he met with them in the weeks leading up to Super Saturday.