Sense of relief in Kaikoura 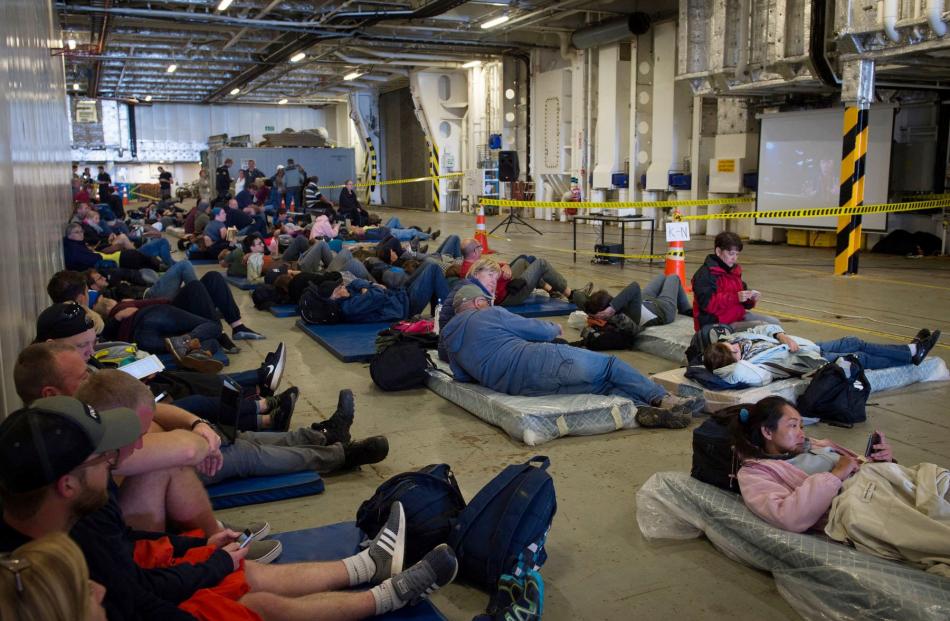 Evacuees who had been stranded in the earthquake-affected Kaikoura rest aboard Royal New Zealand Navy ship HMNZS Canterbury. Photo from Reuters. 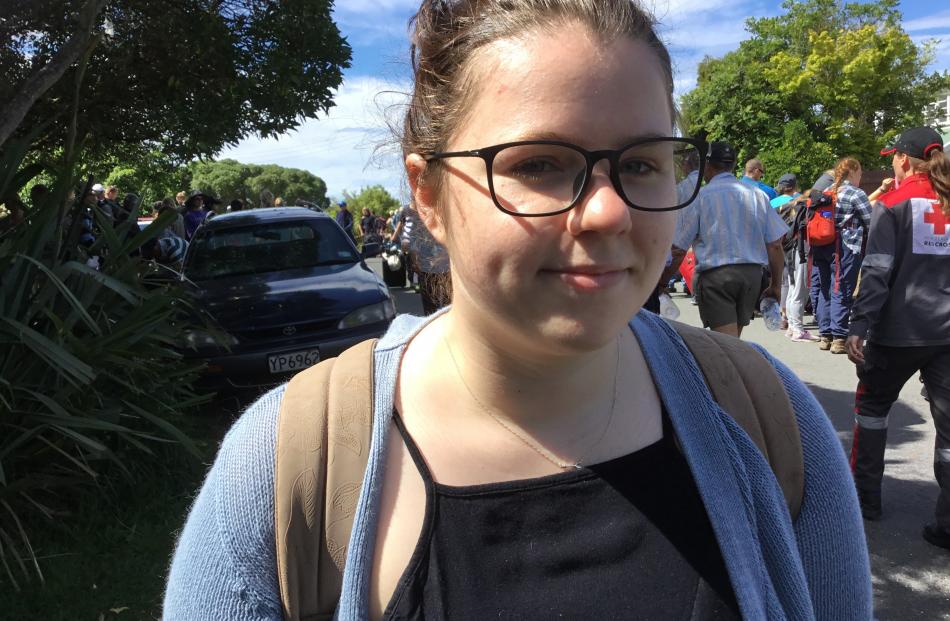 University of Otago student Alice Edgcombe was looking forward to escaping after being left "shaking and crying" by the quake. Photos: Chris Morris 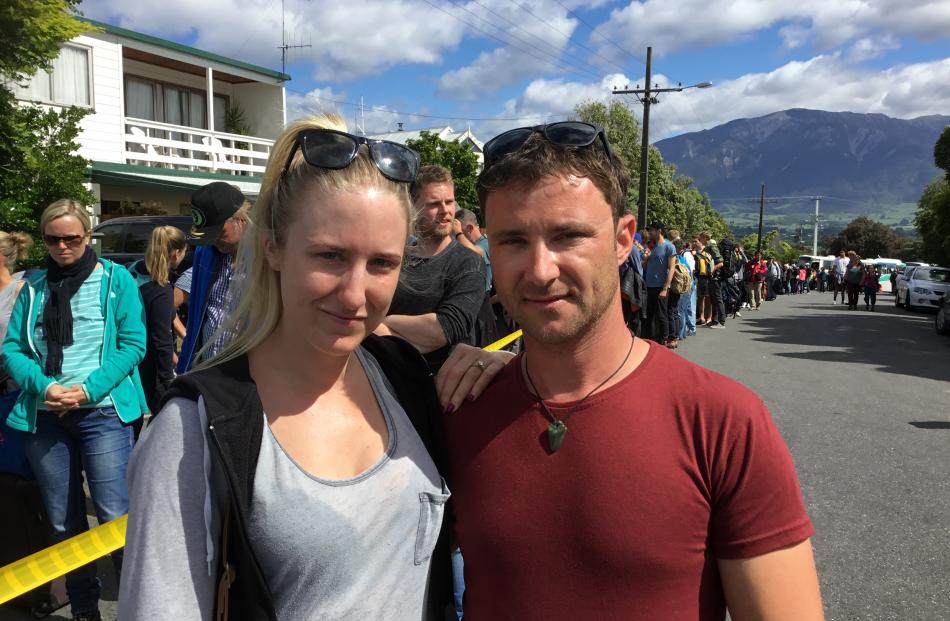 Newlyweds Kailah and Kurt Sapwell prepare to board the Canterbury. Photo: Chris Morris

The ship was a symbol of hope for thousands.

It was HMNZS Canterbury, emerging from the northern horizon yesterday morning to take up position in South Bay, Kaikoura.

Soon, its crew were using rigid inflatable boats and larger landing craft to ferry the first lucky tourists on board, while military and civilian helicopters continued to shuttle people out and supplies in.

It was a sign of progress that brought smiles and a sense of relief to the hundreds of tourists stranded in Kaikoura with limited supplies and water running low following Monday's 7.8-magnitude earthquake.

The elevation yesterday of the quake from a magnitude-7.5 to 7.8 makes it equal in size with only three other New Zealand quakes in the past 150 years.

And, as tourists and residents alike bid emotional farewells, one of those glad to be escaping was former Otago man Kurt Sapwell.

Mr Sapwell, formerly of Cromwell, had returned to New Zealand from his new home in Perth to marry his fiance, Kailah, who is three months' pregnant, earlier this week.

The newlyweds were honeymooning in New Zealand, and were staying in a boutique hotel in Kaikoura, when the quake struck.

''It was full-on. All the windows breaking, suitcases flying across the room.''

The pair made it to their upstairs balcony, thinking they would jump if the building collapsed, but it was then Mr Sapwell noticed the water had sucked out from the beach.

''Thirty seconds later I looked out and the sea was back in already.

The pair escaped to high ground and endured the long night of aftershocks that followed, he said.

''The night was pretty full-on. The next day was just relief, and you could see it on everyone's faces.''

They had since found a habitable room to stay in and the days since had been spent foraging for clean drinking water, like in ''the Dark Ages'', he said.

They were still among the lucky ones; hundreds more tourists have been sleeping in cars, tents, strangers' homes or the marae since Monday.

And Mr Sapwell - like most spoken to by the ODT since Monday - was full of praise for all of those involved in the relief effort.

Yesterday started much as Tuesday had finished with a series of aftershocks and hundreds of people queuing for food at the Takahanga marae.

But the activity quickened after breakfast, as Civil Defence staff co-ordinated a ''big push'' to evacuate 700 tourists by the end of yesterday.

People in the long queue of those wanting out were given numbers at a tent registration centre outside the marae, giving them a seat on a helicopter or Canterbury, whichever came first.

Those whisked by bus down to South Bay were then given life jackets, placed on RIBs, taken out to rendezvous with the navy's larger landing craft, and from there to the imposing hull of Canterbury.

Some were too drained to speak as they left, but others beamed and gave thumbs up while promising to return one day.

''Brilliant, brilliant,'' Simon Gray, of England, said of his departure as he was ushered on board.

Another Dunedin face found in the crowd was Otago University student Alice Edgcombe (19), who decided to stop for a night in Kaikoura while driving home to Whakatane after a year's study.

The earthquake was so powerful she and her boyfriend could not reach their doorway, and the aftermath had left her ''shaking and crying. 'I was really scared.''

She was due to escape on Canterbury, but said she was ''still in shock that it's happening''.

Sharon Vickers, of Kaikoura, said the operation was a ''fantastic'' boost for tourists and the town's morale.

''Now, to see them going, they are really happy and saying they will be coming back.''

Paul Kramer, from the Netherlands, said he had no complaints as he prepared to escape after waiting nearly three days.

''The people here are incredibly friendly and helpful ... I have never experienced that before.

''We hang on to the local saying, 'No worries mate'. We're alive, so that's the most important thing.'' 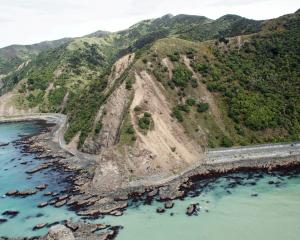 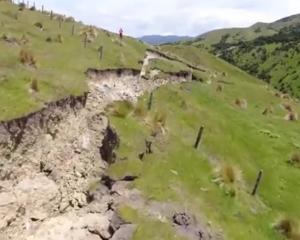 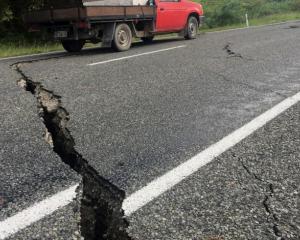 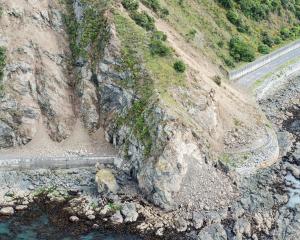 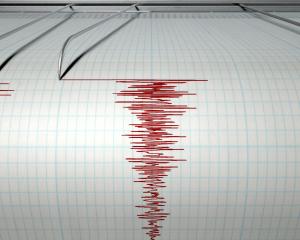 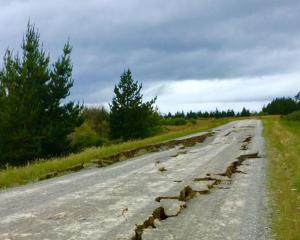 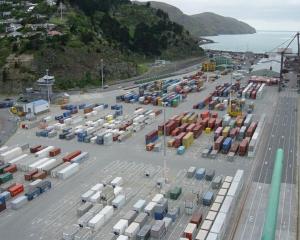 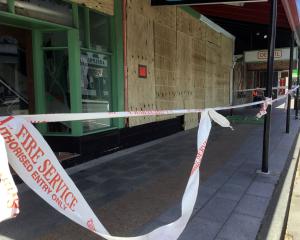 Estimated quake losses up to $4.95 billion 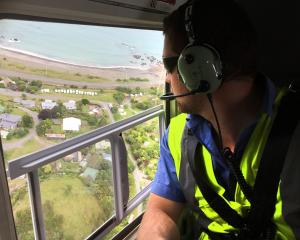 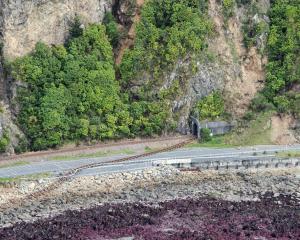 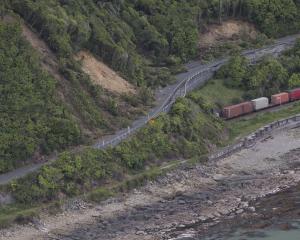