By Hamish MacLean
0 Comments
The Government’s new plan to lower transport emissions is better than the "disaster" of last year’s scheme to get drivers into electric cars.

However, as far as a fair journey to zero emissions goes, it continues to miss the mark, a University of Otago researcher says.

The Government’s first emissions reduction plan released yesterday signalled major changes ahead for every sector of the economy.

Each was targeted with new rules, new programmes, or new trials in order to align the economy with three emissions budgets announced earlier this month.

To put the country on track for its 2050 zero-carbon goal, the Government created a fund with an initial $4.5 billion downpayment from income from the New Zealand emissions trading scheme.

Transport Minister Michael Wood and Climate Minister James Shaw yesterday said $1.2 billion from it would be earmarked for the transport sector alone in Budget 2022.

Part of that was $40 million over four years to speed up a shift to zero-emission buses.

There was $20 million for a trial to lease low-emission vehicles to people on a low income.

Another $20 million, for example, would help freight transport head towards zero carbon.

However, the biggest ticket item was a $569 million "scrap-and-replace scheme", to help lower- and middle-income households shift to low-emission cars after scrapping their older ones.

A pilot of the scheme involving up to 2500 vehicles was due to begin next year.

University of Otago philosophy, politics and economics programme director Prof Lisa Ellis said with four of the five political parties voting to support the emissions budgets, the plan had the stability and direction required to move New Zealand towards a low-emission, and "equitable", economy even if one believed the budgets were not ambitious enough. 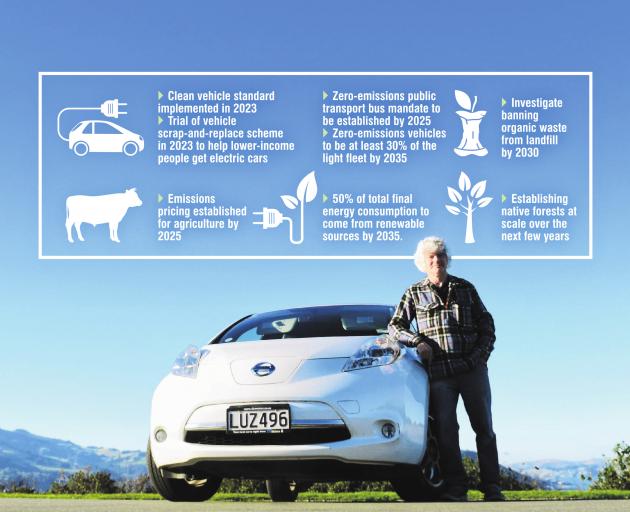 Dunedin electric car driver Sam Patrick welcomed a new Government target yesterday for at least 30% of small vehicles on the road to be zero emission models by 2035. PHOTO: STEPHEN JAQUIERY/ODT GRAPHIC
For transport though, the Government missed some big opportunities to bring everyone, including low- and middle-income households, along for the ride, Prof Ellis said.

She questioned the merits of allotting revenue from the emissions trading scheme to climate policies that could have been funded conventionally.

Returning the emissions trading scheme money "equally to everyone" would reward low-emission activities while giving everyone a stake in the shift to zero carbon, she said.

"The recent ‘fee-bate’ scheme to subsidise electric cars was a disaster from the point of view of bringing everyone along together, since it was accompanied by inadequate effort in public transport, and the subsidies really only affected relatively privileged people," Prof Ellis said.

"It might give everyone a sense of ownership in the transition to sustainability, which would be good, but it does little to change our unhealthy, dangerous, and inefficient system of ‘automobility’, nor does it address the biggest emitters in the energy, agriculture, and other sectors."

Among the many changes the Government signalled yesterday, it said it would develop a mandatory emissions reporting scheme for large energy users by mid-2024, phase out low- to medium-temperature coal boilers by 2037, and investigate banning organic waste from landfill by 2030.

Emissions pricing would be established for agriculture by 2025, it said.

University of Otago agricultural innovation professor Craig Bunt said the approach the Government was taking with the agriculture sector could be termed "cautious" and he cautioned against more radical changes some groups called for.

Prof Bunt said, for example, rather than synthetic nitrogen fertiliser being banned outright, the plan instead emphasised reducing its use.

Limits would encourage people to use it "more carefully, more precisely, more efficiently, to use technology to make sure the right amount gets to the right plant".

"Radical change might be seen as a way to amazing gains, but it could backfire, or reverse, almost overnight," he said.

"Over the last four years this Government has put in place a framework for bold, enduring climate action that will reach across governments, across parliaments, and across generations.

"Because of this work, New Zealand is on track to bend the curve of its emissions downwards for the first time in its history."