0 Comments
New Zealand and Australia are committed to introducing a trans-Tasman travel zone "as soon as it is safe to do so".

Both nations say efforts to resume travel between the two will take some time, as they cautiously re-open their mostly shuttered economies after containing outbreaks of the novel coronavirus.

Australia and New Zealand have for more than a month closed their borders to all non-citizens and imposed mandatory quarantines on anyone returning home from overseas.

Both countries have a Covid-19 mortality rate of just 1% - well below most other countries - with the number of new cases just a fraction of their March peaks. 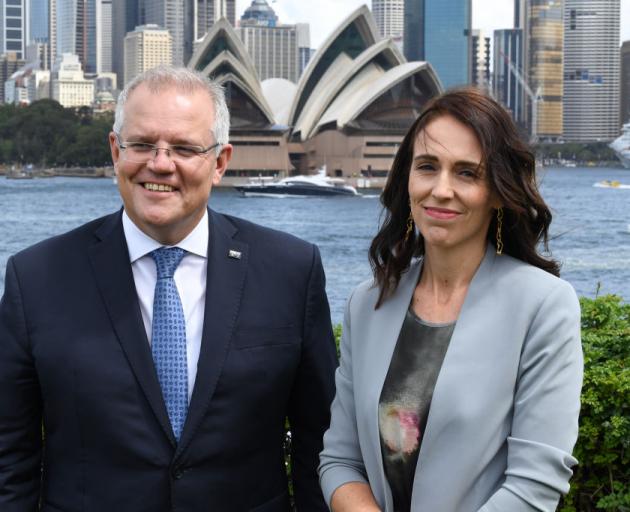 Scott Morrison and Jacinda Ardern in February. Photo: Getty Images
Australian Prime Minister Scott Morrison said on Tuesday afternoon that travel across the Tasman Sea between the neighbours would be the first international route re-started and would likely begin around the time domestic air travel restarts in earnest.

"When we are seeing Australians travel from Melbourne to Cairns, at about that time I would expect everything being equal we would be able to fly from Melbourne to Auckland or Christchurch," Morrison told reporters in Canberra.

New Zealand Prime Minister Jacinda Ardern, who on Tuesday became the first world leader to join an Australian Cabinet meeting in more than 60 years, said the move would take some time to work through.

"Australians and New Zealanders travel across the ditch more than anywhere else. So we both stand to benefit from getting travel up and running again, she told reporters in Wellington after attending the meeting via video with Australian ministers as well as state and territory leaders.

"When we feel comfortable and confident that we both won't receive cases from Australia, but equally that we won't export them, then that will be the time to move.

"Neither of us want cases of Covid coming between our countries."

‘One key aspect to get New Zealand moving is the work on the trans-Tasman bubble,’ said New Zealand Prime Minister Jacinda Ardern as Australia and New Zealand look forward to restarting their respective economies https://t.co/3HvrZgAWlK

The trans-Tasman bubble would ease travel restrictions between the nations and would be put in place once the necessary health, transport and other protocols had been developed  to ensure the protection of public health, the leaders said in a joint statement late this afternoon.

There was no specific time frame given.

Morrison and Ardern agreed to commence work on a trans-Tasman Covid-safe travel zone - easing travel restrictions between Australia and New Zealand "as soon as it is safe to do so", the statement said.

Once "effective travel arrangements across the Tasman" are established they would look at opportunities to broaden that to the Pacific.

"A trans-Tasman Covid-safe travel zone would be mutually beneficial, assisting our trade and economic recovery, helping kick-start the tourism and transport sectors, enhancing sporting contacts, and reuniting families and friends," the statement said.

"We need to be cautious as we progress this initiative. Neither country wants to see the virus rebound so it's essential any such travel zone is safe. Relaxing travel restrictions at an appropriate time will clearly benefit both countries and demonstrates why getting on top of the virus early is the best strategy for economic recovery."

Australia has recorded around 6800 infections and 96 deaths, and New Zealand 1486 cases and 20 fatalities, thanks to the early imposition in both countries of social-distancing rules and the closure of borders to international visitors.

New Zealand recorded no new coronavirus cases for a second day in a row on Tuesday, and Ardern has vowed to completely eliminate the pathogen from the country of almost five million people.

Ardern said New Zealand is Australia's second largest source of tourists after China, with 1.2 million visitors last year, and 1.6 million Aussies visited New Zealand. There are about 75,000 Australians in New Zealand and more than half a million Kiwis in Australia.

"We're also Australia's largest export market by number of exporting firms ... so the case for increasing economic relations when safe is clear."

However, Ardern said any travel agreement between Australia and New Zealand would prioritise safety.

She said the discussion was only possible as a result of the world-leading results on both sides of the Tasman to get the coronavirus under control.

"I do think we should both be proud of the efforts that have been made."

An Australia-New Zealand bubble would mean people from both countries being confident of travelling between the nations without having to quarantine - but was still some time off, she said.

New Zealand has been urged to include the Pacific Islands in any proposed trans-Tasman bubble. Ardern has said the Government is focused on travel between New Zealand and Australia rather than with other Pacific nations for now, because of the "huge risk" if the coronavirus found its way into Pacific Island nations that are yet untouched by the virus.

"It could be a very good model for the international market opening up in phases," the chief of Australia's largest airline told reporters.

Qantas is currently operating only 5% of its pre-crisis domestic passenger network and 1% of its international network.