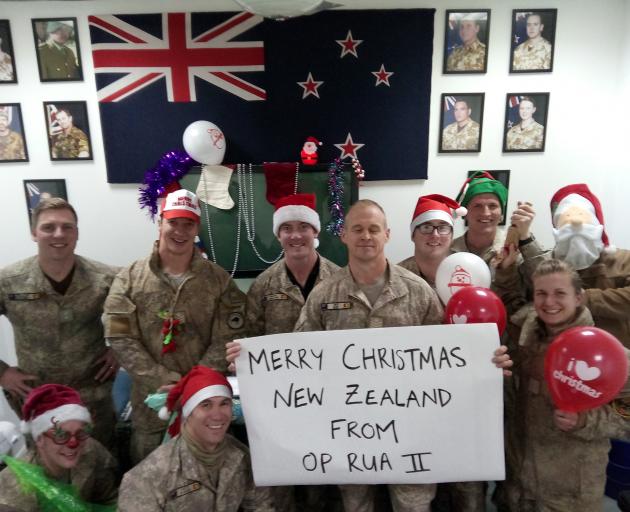 Lieutenant-colonel Cory Neale, of Balclutha, is in Afghanistan serving alongside a coalition of countries including the United Kingdom, Australia, Denmark, Turkey and Afghanistan.

He left home at the end of October, so has not had much time away from his family, although he does miss them.

His wife and two young children remain at home in Balclutha.

"I’d love to be back with them but there’s still a long way to go. We’re not due to leave here until the middle or late next year."

He was sure his family will have a great time at Christmas "just judging by the amount of money I’ve spent on presents".

However, one positive is the "well established" set-up at camp in Afghanistan which means Lt-col Neale is able to stay in touch with his family on a regular basis.

"Because of the way the camp has been set up, there’s everything you need [to contact family]. There’s wireless internet so we can get on Facebook and Skype and things like that."

Christmas with the army will be slightly different not only from how it is celebrated at home but also make a change in the workplace.

"This year, things will stop. Everyone on Christmas Day ... will have a bit of a rest."

Some of the senior personnel will put on a "soldier’s lunch" for other members to "show them that we appreciate what they do for us".

Lt-col Neale says he and others in similar positions to him will take over the junior roles and do sentry and guard duty in their place.

"We’re going to put on a soldier’s lunch and take some of their responsibilities just to give them a break."

Those not required for guard duty will wait on tables.

There were Christmas decorations, trees and lights all around the base.

There will also be activities such as a raffle and the traditional Secret Santa.

It would be a welcome break from Lt-col Neale’s "challenging" work of being a mentor to an Afghanistan army officer.

"Mentoring is not about telling someone what to do," Lt-col Neale says. It is about raising ideas, getting others’ "buy-in", seeing what they need and meeting those needs — all while trying to meet the mandate of his mission.

"So it’s quite challenging.’’That and the environment can also be a challenge.

"It’s cold. We’re about 1800m above sea level. It’s quite stark and quite barren around us. There’s not much vegetation."

Travelling to work involved going through "a number" of security layers.

"Everything we do is confined within a secured training area ... It’s cold but it’s safe."

Lt-col Neale says the base has been in operation for about five years and the "hardened" shipping containers they stay in are kitted out with everything they need.

Of course, working with others is an important part of the job. Besides working with members of the United Kingdom and New Zealand armies, it was "always nice" to work with the Australians, whose humour was common to Kiwis’.

There are also soldiers from Denmark who are "very different" in terms of their sense of humour as they are "straight and down the line ... but at the same time very cheeky", Lt-col Neale says.

It might sound relatively tame but Lt-col Neale says there is still that "bigger risk out there".

"There is a war going on ... so we’ve got to be mindful. We’ve got plenty of people to protect us to do that mission so it’s all very safe."

What he and others were doing there, wherever exactly there is, is all secure.

And as a message to his family, Lt-col Neale just wants to tell them to have a great Christmas.