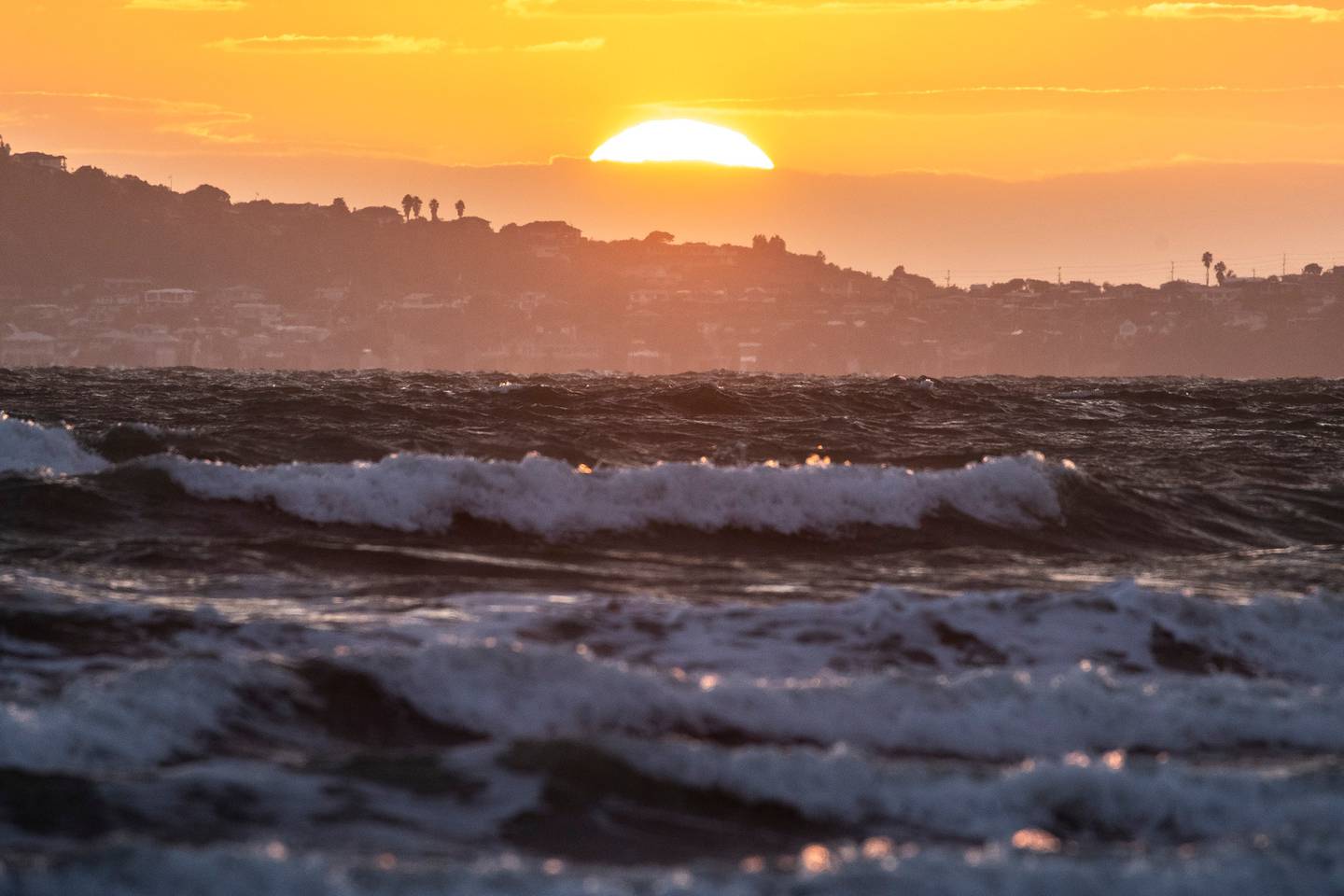 The sun rises at Auckland's Orewa Beach. Photo / Michael Craig
North Island residents are being advised to plan for the "very intense" effects of Cyclone Cody which is forecast to "whip up… significant swells", storm force winds and possible coastal inundation this weekend.

Yesterday, MetService said residents on exposed coastlines on the North Island should prepare for dangerously high waves of up to 8 metres from today.

However, MetService meteorologist Peter Little this morning said the effects from Tropical Cyclone Cody which is currently over the open waters north of New Zealand will likely arrive late Sunday.

"It's been reasonably consistent in terms of the timeline. It's currently about half way between Fiji and New Zealand," Little said.

"It's moving very slowly but it's expected to accelerate over the coming days and it's still looking like it will cross around about the East Cape area and have effects from late on Sunday but actually cross that area during Monday."

Little said when the storm does likely first hit the east coast of the North Island it will bring swells and potentially torrential rain that could lead to coastal inundation.

#CycloneCody remains a deep intense low pressure system despite losing its tropical cyclone characteristics this morning. This does NOT mean it has weakened. Latest track has shifted further east but impacts still coming for parts of NZ. Keep up to date at https://t.co/Yjbq0jgaoz pic.twitter.com/8uBX2SEOYX

"[Cyclone Cody] goes through a transition period [as it moves south into cooler waters] but it still remains a very intense system.

"If it does transition from what we call a tropical feature to a sub-tropical feature it can still bring very heavy rain, very strong winds, and the seas that this cyclone is going to whip up for eastern areas and the swells are also going to be significant. It could lead to potentially coastal inundation and surge and rips on those exposed coasts."

Little said MetService will be looking into the details of where specifically the most serious weather conditions will be across the North Island and the top of the South Island today and tomorrow.

"We'll be looking into that in a lot more detail in the coming days and issuing severe weather advice to help people plan."

Around 9.30am today, MetService updated that Cody remains a "deep intense low pressure system" despite losing its tropical cyclone characteristics this morning.

"This does NOT mean it has weakened. Latest track has shifted further east but impacts still coming for parts of NZ," MetService tweeted.

Swimmers were splashing through the choppy surf as the sun rose on what is set to be a high of 26C in the City of Sails.

Dangerous coastal conditions 🌊#CycloneCody is forecast to bring dangerously large waves to many parts of the North Island from Friday onwards.

5-8m waves with long period swell from the east has potential for significant impacts about the coast.

The latest severe weather outlook provided by MetService says Cody is expected to make landfall over the Bay of Plenty.

"If the projected path of Cody from late Sunday and on Monday is correct then gale to storm force winds are expected to affect a large portion of northern and eastern North Island and the upper South Island, resulting in large easterly swells, significant sea surges/rips and coastal inundation about exposed eastern coastlines," the MetService outlook says.

Mount Maunganui Lifeguard Service has posted footage on their Facebook page this morning announcing "the first signs of the big swell... hitting beaches up and down the coast".

"This is expected to be a significant swell event, which means big waves, strong currents and dangerous conditions," the Mount Maunganui Lifeguard Service post says.

"Our call-out squad has already been busy with unprepared boaties and water-users and we don't want any more serious incidents on our beaches, please!"

The lifeguards are advising anyone wanting to get in the water this weekend to speak to the volunteers patrolling beaches first.

Thames Coromandel District Council yesterday announced that MetService had informed them the Coromandel is going to "bear the brunt" of Cody when it makes landfall early on Monday morning.

"For residents, holidaymakers, and campers on our eastern seaboard - staying alert and getting prepared is vital," Thames Coromandel District Council warned on Facebook, advising residents to check here for updates.

Cyclone Cody will also be accompanied by a tropical airmass bringing heavy rain to many parts of central and northern New Zealand, with potentially torrential rain for the east of the North Island.

For Bay of Plenty east of Whakatāne, Gisborne and Hawke's Bay MetService says there is "high confidence" of heavy rain reaching warning criteria from late Sunday into Monday, and severe gales in exposed places.

For Great Barrier Island, Coromandel Peninsula, the remainder of Bay of Plenty, Rotorua, Taupō, Taihape and Wairarapa there is "moderate confidence" of warning amounts of rain and winds reaching severe gale in exposed places.

For areas further west including Northland, Auckland, Waikato, Waitomo, Taumarunui, Taranaki, Whanganui to Wellington and also Marlborough, there is "low confidence" of warning amounts of rain and severe gale winds from overnight Sunday and on Monday.

Because there is some uncertainty about the track of Cyclone Cody people are being advised to stay up to date with the new ​​severe weather watches or warnings issued today.

This morning, Bay of Plenty Civil Defence said waves up 4-5m are possible along the coastline in the coming days and "coastal inundation is possible on low lying roads and property near the ocean, especially in western Bay of Plenty".

"Cyclone Cody will initially cause very large waves to batter some eastern coastlines of the North Island, followed by prolonged heavy rain and possible damaging wind in some areas," the Bay of Plenty Civil Defence update said.

"The latest data indicates that for Bay of Plenty/Te Moana-a-Toi, waves will rise significantly on Sunday, then stay very high until Monday. Waves up 4-5m are possible on the coastline, and waves could be up to 7m high offshore, causing dangerous conditions both at sea and about the coast.

"Waves of this size have a lot of power and can cause significant rips. A spell of very strong wind and heavy rain is likely on Monday as Cyclone Cody passes overhead."