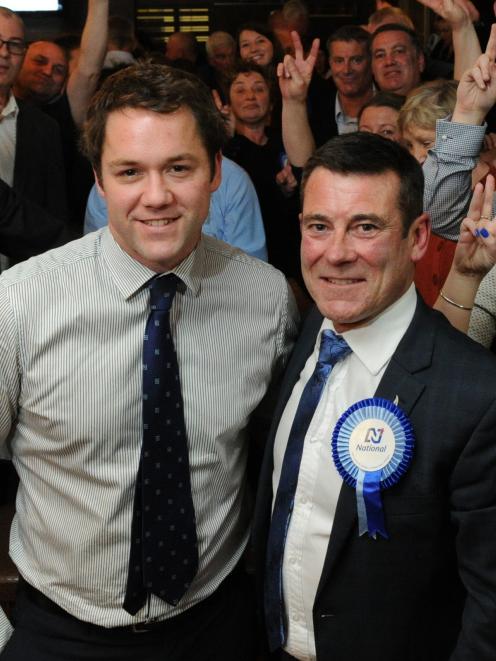 National Party candidates Hamish Walker and Michael Woodhouse celebrate at their party's election night HQ. Photo by Gregor Richardson
It's a metaphor for the political situation in New Zealand - Labour supporters gathered at the Southern Sports Bar and Grill in Dunedin while across the Oval at the Kensington Tavern, National supporters celebrated the election's result.

The parties are so close together, but a field of darkness separates Labour from the light of victory.

Dr Clark won the same electorate against the same opponent in the 2011 election by 3489 votes.

"I was hoping to retain my majority against some potentially unfavourable boundary changes and it's grown, and I'm humbled by that,'' he says.

Dunedin South Labour MP Clare Curran has been returned by a margin of 3701 votes against newcomer National candidate Hamish Walker.

However, the Labour Party has to learn lessons from this election, she says.

"The people have spoken and it's really important that we listen.''

Dr Clark said the party would go through a period of "soul searching'' in the coming weeks.

Over at the Kensington, one of the biggest cheers at a jubilant National Party gathering came when television coverage showed Labour's Kelvin Davis ahead in Te Tai Tokerau.

Hone Harawira's apparent loss meant the Internet Mana Party, Kim Dotcom's thorn in the side of National during the election, would win no seats.

It was the cherry on top for National supporters in a Dunedin result that saw National win the party vote in Dunedin South, and come within 24 votes of doing the same in Dunedin North.

While National's Michael Woodhouse lost the Labour stronghold Dunedin North electorate to Dr David Clark, the list MP said he was "delighted'' with the campaign.

Mr Woodhouse predicted National would not necessarily govern alone, but would likely have to work with "partners''.

It would, however, not be a long post-election process to form a government.

On the attacks on the party from Kim Dotcom, he said the New Zealand public could "see through that''.

Dunedin South National candidate Hamish Walker said he was "really happy'' with his effort, despite his 13,242 votes not enough to unseat Labour's Clare Curran, who got  16,943 votes.

"Obviously it's tough coming up against a two-term MP", he said.

He did, however, plan to continue with his political ambitions.

A disappointing showing for the Greens was reflected in the subdued mood at Dunedin's Green Party election night gathering.

Mr Gallagher said the Greens had "run a good, clean campaign'' and at least maintained its support in New Zealand.

Asked about Internet Party backer Kim Dotcom's effect on the election, Mr Gallagher said he had shown up abuses of ministerial power, and the results of that would play out in the next few months.

But those issues had also moved the focus away from policies.

Mr Gallagher said National had "no vision'' for the country, something that had got lost during the campaign.