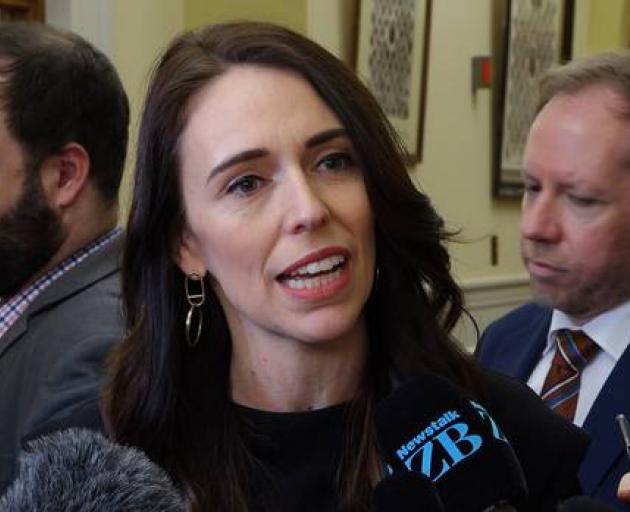 This comes after unemployment numbers this morning defied expectations, falling 0.2 percentage points to 4 per cent.

But, as ANZ senior economist Liz Kendall put it, "today's data massively understates the weakness that was prevailing in the labour market".

"Today's unemployment figures don't tell the full story of the jobs crisis we're in as a country, and are masked by the 452,425 people on wage subsidies."

He said when the second round of the wage subsidy expires on September 1, the "real cost of this economic downturn will be felt then".

But speaking to reporters before Question Time this afternoon, Ardern was more optimistic.

She said the Government had forecast spending $3.9 billion for the second round of the wage subsidy scheme – "it's been closer to $2 billion".

"That does give us an indication that we have weathered this storm better than we anticipated."

And the headline unemployment figure itself, Ardern said it shows that "things are certainly not as dire as had been predicted".

However, she warned it was important to look deeper into the numbers.

In its statement this morning, Stats NZ said roughly 650,000 people were away from their job, working fewer hours or less than they wanted, or were otherwise less active due to Covid-19 reasons related reasons, such as sickness or lockdown.

Finance Minister Grant Robertson said although it was good to see headline unemployment down, the number does not show the full impact of Covid-19.

"But it is a result that shows that we have come into this with a robust economy and New Zealand has got a good head start on the rest of the world."

He warned that it is the numbers from the September quarter that would help tell the full story of the economic impact of Covid-19.

But, for the most part, Ardern said the numbers were an illustration that the wage subsidy scheme had made a difference.

She did, however, warn against complacency.

"It's still really important that we continue with our really strong plan for job creation and training."

OECD/WEF says NZ is the worst economic performer of the 30 wealthiest countries with a 30% decrease in GDP. Why is this not news? Deaths per million from this virus: Cuba, Malaysia, Taiwan and another half a dozen other countries have done better than NZ because of their treatment approach. We should compare ourselves with the leaders, not the laggards.

What? They treat the affected and have an economy?

National is hangdog about everything. That's opposition.

I've searched and can't find these figures anywhere in OECD/WEF web sites. These agencies are mentioning NZ but not negatively, they are certainly not saying NZ is anywhere near the worst performer, there is no mention of 30% decrease in GDP. That's probably why it's not news, because what you've said is all untrue, all made up.
I'm not sure what point you're trying to make about covid 19 deaths per million. Yes there are other countries with better numbers than us on that point. However the fact that most, not all I admit, are 3rd world countries with limited Health infrastructure and are totalitarian regimes renders their stats a little suspect. But our Govt has stated it is looking at how the better performers achieved their results so we can pick up our game. Just as the great number of laggards out there are looking to us to find out how we have managed the pandemic so well. Like it or lump it otagoideas, NZ is looked at with envy by pretty much the rest of the world for the quality of its leadership and the management of the pandemic.

Ardern's comment sounds like a Trumpism. We are no way out of the woods yet, we have just managed to keep the virus at bay. BUT, it hasn't gone away, it's just waiting to come back. Then there is the financial issue; billions spent, some well, some badly all of which will have to be paid back. What's the plan? Discussions and hot air but nothing delivered, even before covid.

All that effort to make a comment and not one factual statement in it. Absolutely nothing Ardern says above sounds remotely like a Trumpism. What are you on about? The team of 5 Million have not "just" managed to keep the virus at bay, they nailed it. Yes, it's still there, just waiting to come back. What's your point, have you only just figured that out. The Govt clearly knows this and is planning and advising the team of 5 million accordingly. Far better than National who would through open the gates and let the world move in. That would be a disaster. Billions spent but there is a plan in place to manage that. Just because you can't understand it doesn't mean its not there. The Labour/Green/NZFirst coailition Govt has delivered. They've delivered a budget surplus each of the 3 years they've been in power so far, unlike the deficit govt that was presided over by John Key the previous 9 years. Read the ODT, they have set out quite clearly the Govts plan to recover economically from the pandemic. You should stop spouting off without checking the facts.

Those people not happy with the way NZ handled the virus should leave. They do not deserve to live there and they would obviously be happier somewhere like the USA, or the UK, or Australia, where the right wing governments are showing the world how to deal with the virus and save their economy.