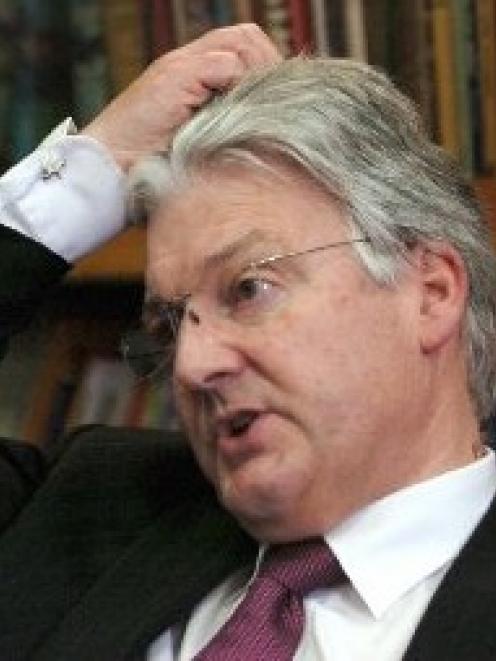 Peter Dunne
United Future leader Peter Dunne has resigned as a Minister after he was found to have withheld information from an inquiry into a leak of a GCSB report.

Prime Minister John Key has just released the report and said it showed that Mr Dunne had not met all the requests for information from the inquiry.

"I have met with Mr Dunne to discuss the matter. He has advised me that he remains unable to fully meet the inquiry's requests and accordingly, he offered and I have accepted, his resignation as a Minister."

Mr Key said he had told Mr Dunne he was "very shocked'' by the Henry report.

During his Wednesday night meeting Mr Dunne had assured him that his relationship with Ms Vance was "totally professional' '.

"One of the first things he said to me was there's no issue there.''

Mr Key said Mr Dunne had indicated to him he would stay on as an MP and continue to support his Government including on key legislation like the SkyCity deal.

National would continue to work on policy issues with Mr Dunne.

It was unlikely Mr Dunne would return as a minister in the 18 months before the next election.

He was "deeply saddened" by the events. However, it was a sensitive Government document and the leak was "a very serious matter."

Mr Henry's report shows there were 12 emails exchanged between Dominion Post reporter Andrea Vance and Mr Dunne on April 8 - the day before Vance's article revealing the report's findings appeared in the newspaper.

The pair exchanged a total of 86 between March 27 and April 9.

Mr Henry said he advised Mr Dunne he considered it necessary to to have access to the text of those messages for the purpose of his inquiry.

"Mr Dunne has declined to allow me to read those 86 emails.''

Instead Mr Dunne had shown him an edited version of 44 of those emails.

"That text shows that GCSB issues, including the Kitteridge report, were prominent in the email exchanges. Mr Dunne was to meet the reporter on the morning of Monday April 8 [the day the leak was believed to take place] but states he did not do so.''

He said without permission, he was unable to investigate further because he had no powers of compulsion.

He said two public servants had also had access to the report and had been in contact with the Fairfax reporter at the time it was leaked in early April.

He obtained all information required from those public servants and had established that their contact was related to proper official duties.

Mr Dunne advised Vance on March 27 that he had been briefed on the report's contents.

Mr Dunne has repeatedly denied leaking the report after NZ First leader Winston Peters accused him of it.

Mr Key said Mr Dunne had "denied categorically'' that he leaked the report.

He had offered Mr Dunne a choice of releasing the full emails or resigning and Mr Dunne had opted to resign. He said Mr Dunne had not offered an explanation for that choice.

"He chose the course of resignation.''

Mr Key said Mr Dunne had told him "categorically'' that he wasn't responsible for the leak.

"I want to believe him, but the inquiry doesn't rule him out,'' Mr Key said.

In a statement, United Future party president Robin Gunston said the party board fully supported its leader "at this difficult time''.

"We recognise his outstanding leadership and service to the party over the years and will stand by him as leader.

"The party has in the past week had a substantial boost in membership, which clearly demonstrates public support for and belief in the need for a Liberal Democratic party. A lot of this support is coming from within Mr Dunne's Ohariu electorate.''

Mr Peters called for the case should now be handed over to the police, saying it involved a serious breach of national security and was never just a matter of politics.

"New Zealand is in a privileged 'five eyes' relationship with the United States, Canada, Australia and Britain and now four of those eyes are looking at us.

"The Prime Minister fails to understand the importance of maintaining the integrity of New Zealand's security system in a world hit by increasing intelligence theft and terrorism.

"Mr Key overlooked his international obligations and has treated a serious breach of security in a cavalier manner. Police should have been called in from the outset."

In a statement, Mr Dunne again denied leaking the report and said he challenged Fairfax Media to confirm that.

"While I did not leak the report and challenge Fairfax to confirm that some of my actions after I received an advance copy of the report were extremely unwise and lacked the judgement reasonably expected of a minister in such circumstances''.

He did not outline what those actions were, but said the reason he he did not disclose the full content of his emails was because he believed citizens, whether the public or journalists, should be able to communicate with elected representatives in confidence.

"Be that as it may, I acknowledge I have not lived up to the high professional standards I have always set myself as a minister. I have therefore concluded that I can not continue to function effectively in these circumstances given the lapses of judgment I have shown.''

At a press conference, Mr Dunne read his statement to journalists before taking questions.

Asked what the lapse in judgement was, Mr Dunne said he had canvassed the possibility of leaking the report with Ms Vance but maintained he had not gone through it. He said the fact he even considered it showed a lapse of judgement.

"I have acted extraordinarily unwisely, even stupidly, and I am now resigned to paying the price for that.''

He said he had no credible explanation for why he acted in that way.

Mr Dunne said there was nothing inappropriate about the emails. He said if he did release the emails, it would show he had not leaked the report but he was not willing to do that.

"Once we start saying private correspondence is public property we go down a very slippery slope.''

He was not trying to protect a journalist, but believed in the need for freedom of communication.

Mr Henry's report showed Mr Dunne had left his office in Parliament for about an hour on the day of the leak.

Mr Dunne said he had left his office to meet Ms Vance at lunchtime but was waylaid and did not make the appointment. He said it was simply for a "catchup'' after an overseas holiday and he had not intended to leak the report at the meeting.