Human side of politics on display 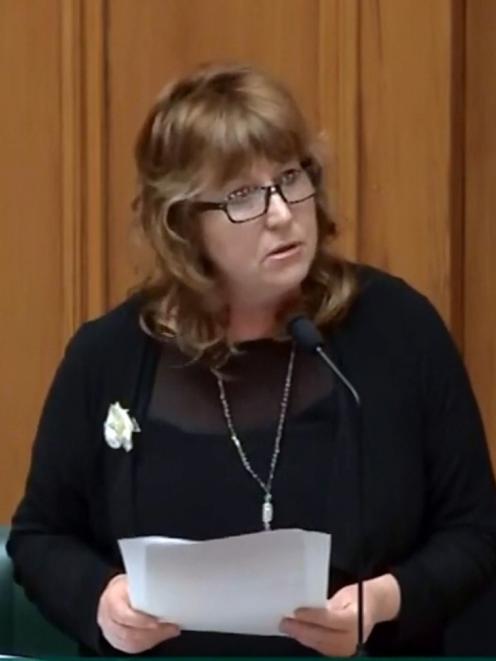 Clare Curran in Parliament last Thursday. PHOTO: PARLIAMENT TV
Contrary to what some might believe, politicians are actually people.

While the job usually calls upon them to consider individual proposed law changes on their merits, sometimes that legislative veneer slips and our MPs can be seen advocating for things they strongly, personally believe in.

That does not have to be on conscience votes - although the debates on both the End Of Life Choice Bill and the Abortion Legislation Bill have provided notable examples of MPs quite literally speaking their mind.

In recent days, two southern MPs have brought either their own experiences or their own personal commitment to the political process, and the quality of the debate has been much improved by it.

was not noted or his body found for up to eight weeks.

There were many reasons why Ms Curran could have spoken on the Bill; she represents a university town, the Government had a speaking slot to fill, and she sits on the select committee which will now consider the Bill.

However, Ms Curran's main reason for speaking was as a mother.

"I wouldn't normally discuss my family in this place, but I remain angry at the lack of pastoral care experienced by my son."

Ms Curran said while one of her sons had had a very different experience of hostel life, she remained "angry and distressed" that there were not processes in place for the safety and support of her other son - and thousands of students like him.

It was a powerful, personal contribution which brought the reality of the intent of the proposed law change home to all.

Not many people talk to a group of strangers about how they have a shower, let alone document the process for the public record, but Mr Perry had made the long and difficult trip to Wellington for an important reason.

The continuing difficulties he has had in obtaining assessments, consents and funding for the shower in his house to be adapted for easy use by a powerchair user, inspired Mr Perry - who has cerebral palsy - to petition Parliament for the process to be improved.

Mr Perry's is not a new complaint; it is an issue the disability sector has lamented for years.

It is also an issue which needs to be urgently addressed; quite apart from the avoidable distress, discomfort and difficulty the disabled experience as a result of delays in modifications to make their lives easier, New Zealand's ageing population will only see the demand for ease of access premises and facilities increase.

It is one thing to know this, but it is quite another to have Mr Perry sitting there telling you of his travails in person with the caregiver, who has to also clamber into the cramped shower stall to help him, sitting alongside.

It is a shower stall which Mr Woodhouse knows well, as he has visited Mr Perry's house several times and helped him through both the bureaucratic process and the parliamentary process of getting the petition before the House.

Mr Woodhouse trod a delicate balance between letting Mr Perry detail his two-and-a-half-year-long battle in his own words, and not "blowing my own trumpet."

However, he was able to provide a useful accompaniment to Mr Perry's answers, and highlight that delays in accessing help posed a health and safety risk his carers as well as Mr Perry.

Pushing for disability rights is nothing new to Mr Perry; as a 6-year-old, he made the paper demanding that he be allowed to bring his pink wheelchair to school and questioning why there had been delays in adapting his primary school to enable access.

As noted in Southern Say a month ago, in Question Time that week, Mr Patterson got to ask Mr Peters if he stood by the Government's policies and actions, and received unctuous praise for "finally holding the Government to account".

It has happened twice more since.

Last week Mr Patterson was commended for his question to the Minister for State Owned Enterprises - one Winston Peters - and then this week Mr Patterson's inquiries on New Zealand's exports to the once more Acting Prime Minister were greeted with "That's an excellent question" and "Another brilliant question."

Mr Patterson found himself rewarded with the opening slot in the week's General Debate for his efforts.

Having recently and forlornly tried to get an answer from the seldom-called upon Local Government Minister Nanaia Mahuta, Waitaki MP Jacqui Dean had another crack on Wednesday.

Replying to a question about wellbeing planning considerations, Ms Mahuta ranged from Taupo to Auckland and back again, but arguably came nowhere near answering Mrs Deans' question - a point she made to Speaker Trevor Mallard.

"She certainly got quite a lot of what the minister considered, some of which is outside her responsibility, so it was answered," the Speaker ruled.