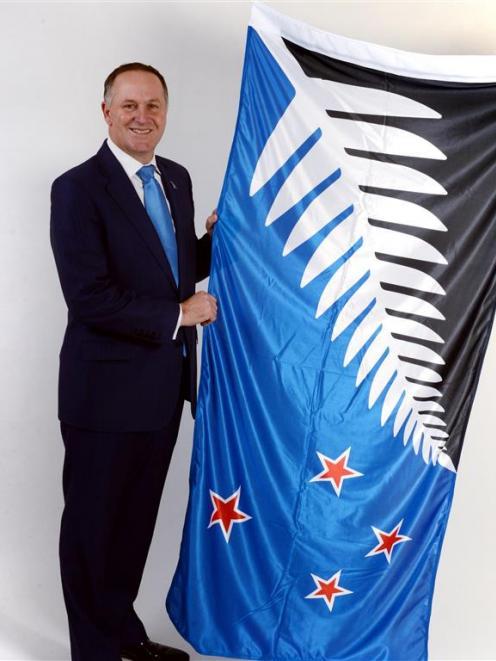 Instead, the country's former leader would simply change New Zealand's national flag and let the public love it or lump it.

"I think it's one of those things that all hell would have broken loose for a couple of months, then we would have worn it, gotten used to it and been proud of it," he told 66 Magazine's latest edition.

Key - the current chairman of ANZ Bank NZ - had been strongly in favour of changing the national flag in 2015 and 2016 when he was Prime Minister, preferring a black and white silver fern design to the current flag with its British Union Jack on it.

His Government spent $26 million and two years engaging with the public in a bid to bring about the change.

Two referendums were held; one choosing the best flag design and a second to decide whether it should replace the current flag.

Key was criticised for the cost of the process and starting a contentious debate that divided the country.

But he told 66 Magazine he would now bypass and do away with the debate and go straight for the flag change because New Zealand needed an iconic symbol.

"I still believe that, as a small country at the bottom of the world if we want people to know us, we need a symbol that is ours," he said.

How the flag debate played out

In early 2015, a panel of prominent New Zealanders was appointed to oversee the process.

Some questioned the decision to include no designers on the 12-person panel, which was made up of ex-sportspeople, academics, advertising gurus and businesspeople.

More than 10,000 flag designs were submitted by the public, which the panel cut down to 40 alternative flags.

The shortlist was dominated by silver ferns and koru, though many retained the Southern Cross.

At that stage, opposition to a change intensified. Critics questioned the $26m cost of the referendum and the inadequate process.

Some sections of the public lamented the absence of a forward-thinking design in the final contenders. 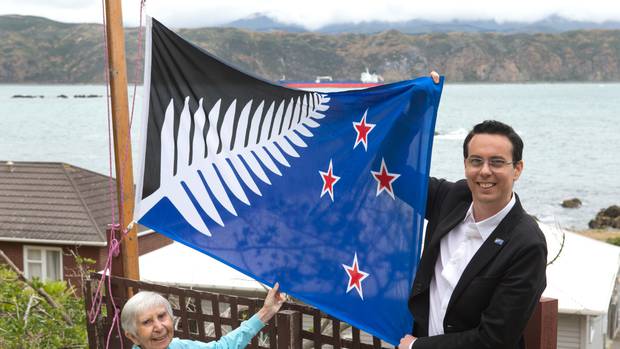 Kyle Lockwood and his grandmother Kathy Lockwood with his flag design that was put against the current flag in the second referendum. Photo: NZME
The long list was trimmed to four flags, of which three featured silver ferns and one a koru. After a public campaign, a fifth contender, Red Peak, was added to the ballot.

In the first referendum in November and December, a black, white and blue silver fern flag was chosen as New Zealand's alternative national flag.

Turnout in the referendum was relatively low, at 48.78%. About one in 10 votes was discarded, likely as a result of protest votes.

The silver fern flag, designed by Melbourne-based New Zealander Kyle Lockwood, was then flown in more than 250 sites across the country to help voters make up their minds.
As the second vote neared, the issue heated up.

The National Party was forced to deny its caucus was holding secret meetings to bolster support for a flag change. New Zealand First leader Winston Peters alleged voting papers had been wrongly translated.

Through it all, Key remained optimistic of a change, despite polls showing overwhelming support for the status quo. In the lead-up to the second referendum, he said that the issue was a "once in a lifetime" opportunity.

If the vote was after the Americas Cup team wore their new flag shirts then it would have won. What put many off changing was the cost, the campaign of lies (mainly from the RSA) & the fear factor (elderly don’t like change).
Most people believed taking the Union Jack off our flag would mean a republic, no more Queen and Commonwealth. Very few knew that only 4 of the 53 Commonwealth nations have a Union Jack on their flag. The Commonwealth has its own flag. So does the Queen. A flag has nothing to do with being a republic.
The RSA told lies and created fear in the elderly. Our WW1 soldiers did not die for a flag and in fact have the black fern on their graves.
Then there were the childish comments about the flag looking like a tea-towel. The current flag is sold as a tea-towel in our tourist shops!
Then there were the ignorant who said overseas people must be dumb if they can’t tell the difference between ours and the Aussie flag. Can they tell the difference between the Belgium and German flag?? We fought for one of those countries - the other was our enemy.
Despite this, John Key and his party were hero worshipped - still are. They were allowed to err - still are.

The original story (flag referendum) was carried out in 2015 as stated.

Probably not National's greatest moment, but why don't you go and dig up Helen Clark and ask her about approved 'show head sizes' and light bulbs? Be sure to detail how it 'played out' for Labour too.

New Zealand is not a small business or corporate that needs a new logo.

"all hell would have broken loose for a couple of months, then we would have worn it, gotten used to it"

That, in a nutshell, explains the attitude politicians have to the average Kiwi....'We don't give a damn about your opinion, we'll just do it and eventually you'll get used to it'

John Key should be ashamed of himself!

I hav never been a Key fan, and i think he went about this campaign the wrong way.
This is one of his pet changes that still needs to be made.

This says more about key's inherent arrogance then anything else. Thank goodness he left before he was voted out. now about his "job" at ANZ Bank. when will he terminate himself?

It's about the only thing i agree with John Key on, i would have liked to have seen the blue and black flag as pictured.

Happy with the current one, but get annoyed sometimes when people confuse it for the Aussie flag.

Arrogant right to the end. Good riddance to you.

Good we don't have a 'Strong Man' in charge, then.

who cares what the yesterday man says....

Brexit most likely would make the Union Jack an emblem of a divided kingdom.