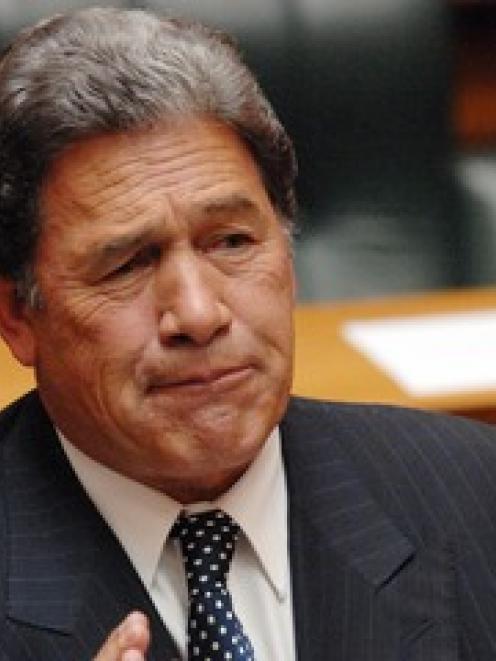 Mr Peters is under fire for failing to answer questions about donations to his party. Yesterday he would not say if big business was behind the latest donation revealed in the Dominion-Post.

The newspaper said it had a deposit slip showing $19,998 was banked, possibly through multiple cheques, into the party's coffers in December 1999.

Electoral Commission records show NZ First has not declared any donations of more than $10,000, the threshold for disclosure, since at least 1996 when its website records began.

Questions have been raised about an undeclared $100,000 donation to the party from billionaire Owen Glenn, cheques from the racing and fishing Vela family which were made out in amounts just under the $10,000 threshold, and a $25,000 donation from Sir Robert Jones which was banked into the Spencer Trust when he thought it was going to the party.

Mr Hide, who has asked the Speaker to launch a privileges committee inquiry, was successful in getting the Serious Fraud Office to agree to consider investigating the donations.

In Parliament yesterday Mr Peters reeled off a list of allegations against Mr Hide, criticised the National Party and media but avoided the substance of questions about donations.

Dr Arseneau said playing the man rather than the ball had an impact on how the public viewed politicians overall.

"What really concerns me about Winston Peters' behaviour in the last week is that it is mudslinging that I think really does turn the public off."

She was concerned that some people might be so disillusioned they would not bother to vote.

Dr Arseaneau said Mr Peters was trying to get 5 percent of the vote so his party could survive.

Prime Minister Helen Clark said after a meeting with Mr Peters on Tuesday she accepted his assurances no laws had been broken and on Wednesday said she retained confidence in him.

Dr Arseneau said there were important questions to be answered.

"I think when you get down to the very basics of representative democracy, ....this is absolutely vital."

The focus appeared to be on legality.

"I actually think the key issue here is the ethics of what he's done and in terms of ethics he clearly does have a responsibility to answer some questions."

In Parliament, Mr Peters responded to National deputy leader Bill English's questions saying he "had no right to an inquisition". He also made personal allegations about Mr Hide and others.

He claimed the ACT party had:

* been given a $20,000 a year office space by a businessman which was not declared;

* received funds from the Asian community to pay legal fees for the case against Donna Awatere-Huata so an Asian could get her job;

* and linked wealthy businessman Rod Deane to free telephone services ACT was given but not declared.

Mr Peters said his opponents were trying to bring down the Government.

Speaking outside Parliament, Mr Hide said Mr Peters' technique was to accuse others of his own failings.

"I don't think he's capable of explaining what's happened to the money so he's got to divert all attention away from the questions."

He said office space had been provided to ACT but there was no pecuniary interest and there was no requirement for it to be declared.

The party had raised funds for its legal action which included some Asian people. Kenneth Wang was next on the list so removing Ms Awatere-Huata meant he would automatically get the position and there was no deal done.

Mr Hide said he was unaware of Dr Deane contributing.