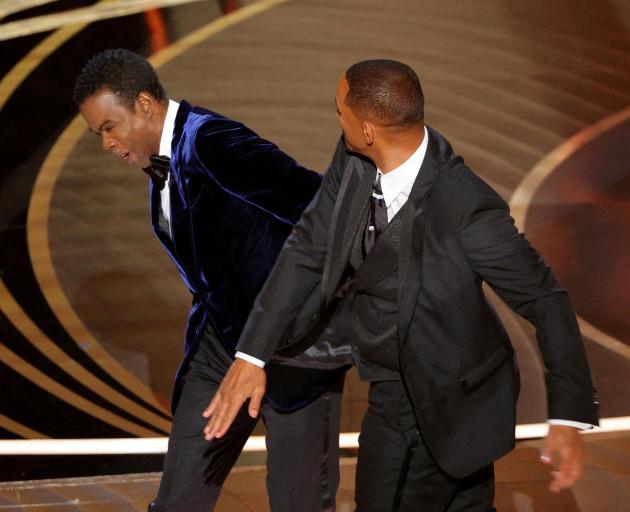 Will Smith slapped Chris Rock after the comedian made a joke about the appearance of Smith's wife, who suffers from hair loss. Photo: Reuters
Will Smith refused a request to leave the Oscars ceremony after he slapped presenter Chris Rock, Hollywood's film academy says, as it began a process that could lead to the best actor winner's expulsion from the group.

During the live telecast of the Academy Awards on Sunday, Smith strode up to the stage after Rock made a joke about the appearance of Smith's wife, then smacked the comedian's face. The actor returned to his seat and twice yelled an obscenity at Rock.

Rock quickly regained his composure before announcing the winner for best documentary.

Less than an hour later, Smith accepted the best actor trophy, prompting questions about why he had not been escorted out.

"Things unfolded in a way we could not have anticipated," said the Academy of Motion Picture Arts and Sciences, which hands out the Oscars, in a statement.

"While we would like to clarify that Mr. Smith was asked to leave the ceremony and refused, we also recognize we could have handled the situation differently."

The academy said it started a process that could lead to discipline against Smith for violations of its standards of conduct, "including inappropriate physical contact, abusive or threatening behaviour, and compromising the integrity of the Academy."

Suspension, expulsion or other sanctions may be approved at its next board meeting on April 18.

Smith apologised to Rock, the academy and viewers in a statement on Monday, saying he was "out of line" and "reacted emotionally."

Rock had referred to the 1997 film G.I. Jane in which actress Demi Moore shaved her head. It was unclear whether Rock was aware that Pinkett Smith has alopecia, a condition that causes hair loss.

Under the academy's rules, Smith has the chance to provide a written response before the group takes action. Smith's representatives did not respond to a request for comment on Wednesday.

The academy in its statement apologised to Rock and thanked him for "resilience in that moment."

At a stand-up show in Boston on Wednesday, Rock made his first public comments about the matter, saying he was still "processing" what happened and would talk about it later.

"How was YOUR weekend?" Rock asked a sold-out crowd at the Wilbur Theatre. He made it clear from the onset he did not plan to address the Oscars incident at length.

"I'm still processing what happened, so at some point I'll talk about that s***," Rock told the crowd. "It'll be serious. It'll be funny, but right now I'm going to tell some jokes."

The 57-year-old received a standing ovation.

During his 80-minute set in Boston, Rock never mentioned Smith. Instead, he launched into a stream of profanity-laced barbs directed at Britain's royal family including Meghan Markle, now Duchess of Sussex, former US President Donald Trump, US President Joe Biden, former Secretary of State Hillary Clinton, Subaru, Lululemon and even his oldest daughter Lola.

Meanwhile, Oscars co-hosts Amy Schumer and Wanda Sykes said they were sickened by the turn of events at the film industry's highest honours.

"Still triggered and traumatized," Schumer said in a post on Instagram on Wednesday. "I love my friend @chrisrock and believe he handled it like a pro. Stayed up there and gave an Oscar to his friend @questlove and the whole thing was so disturbing."

"So much pain in @willsmith anyway I'm still in shock and stunned and sad," she added. "Waiting for this sickening feeling to go away from what we all witnessed."

Sykes also said the incident was "sickening" and that she felt physically ill at the time. "I'm still a little traumatized," she said in clips released on Wednesday from an interview on the Ellen DeGeneres talk show.

Sykes said she felt Smith should have been removed from the event and not permitted to accept his award for playing the father of tennis stars Venus and Serena Williams in "King Richard."

"For them to let him stay in that room and enjoy the rest of the show and accept his award, I was like how gross is this? This is just the wrong message," she said.

Schumer and Sykes co-hosted the ceremony with Regina Hall.

"He came out swinging, but not about Will Smith," said Ramsay Fretz, a 32-year-old Boston real estate agent who sat in the balcony. "It's nice to see someone equally attack everybody."

After the slap that reverberated around the world, TickPick, an online marketplace for events, said it sold more tickets overnight to Rock's "Ego Death" tour than it did in the past month combined.

Balcony seat tickets with a face value of $US61 fetched nearly $US1000 after Smith slapped Rock in front of nearly 17 million television viewers tuned into the Oscars.

Some attendees in Boston were disappointed that Rock refrained from verbally retaliating against Smith.

"You know, it was the elephant in the room," said audience member Jay Dee. "Everyone was waiting for the 'aha' moment that didn't come."