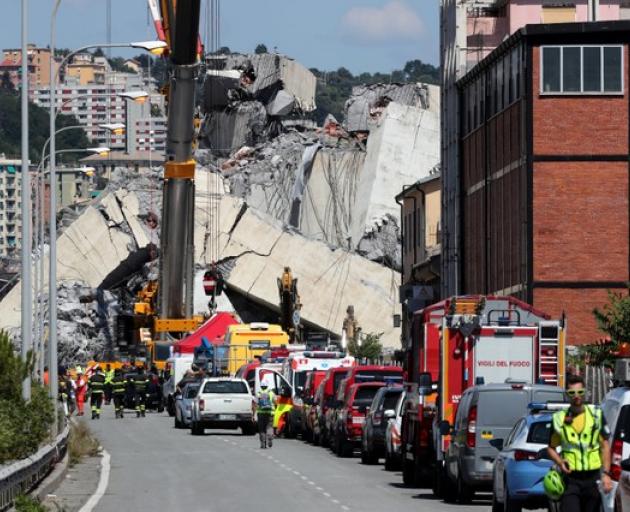 Firefighters and rescue workers stand at the site of a collapsed Morandi Bridge. Photo: Reuters

Italian rescuers searched for survivors among towering slabs of concrete wreckage in Genoa on Wednesday after a bridge collapse killed 39 people and sparked a furious government reaction against the viaduct's operator.

The 50-year-old bridge, part of a toll motorway linking the port city of Genoa with southern France, collapsed during torrential rain on Tuesday, sending dozens of vehicles crashing onto a riverbed, a railway and two warehouses.

Eye-witness Ivan (37), evacuated on Tuesday from the nearby building where he works, described the collapse as unbelievable.

"To see a pylon come down like papier-mâché is an incredible thing," he said. "It's been a lifetime that we've known there were problems. It is in continual maintenance."

"In the '90s they added some reinforcements on one part, but also underneath you can see rust."

As cranes moved in to shift truck-sized chunks of broken concrete, hundreds of firefighters searched for survivors, while public shock and grief turned to anger over the state of the 1.2 km-long bridge, completed in 1967 and overhauled two years ago. 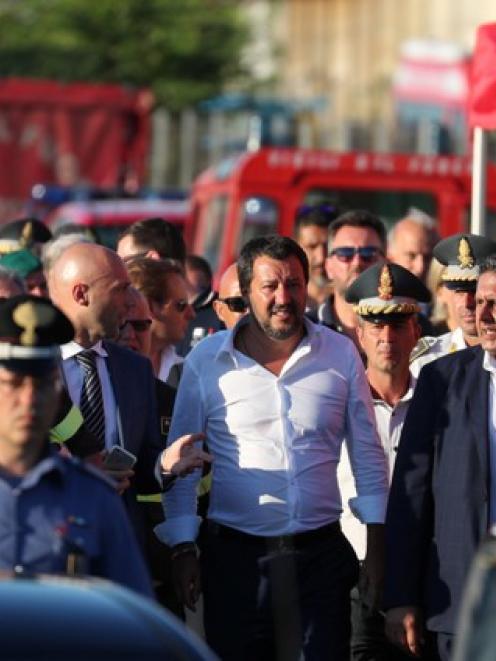 Italian Transport Minister Danilo Toninelli, visiting the disaster scene, said bridge operator Autostrade per l'Italia would have to contribute to the cost of its reconstruction as well as pay heavy fines.

But Autostrade, a unit of Milan-listed Atlantia group , said it had done regular, sophisticated checks on the structure before the disaster, relying on "companies and institutions which are world leaders in testing and inspections" and that these had provided reassuring results.

"These outcomes have formed the basis for maintenance work approved by the Transport Ministry in accordance with the law and the terms of the concession agreement," it said.

A source close to the matter said Autostrade per l'Italia would hold an extraordinary board meeting next week following the disaster.

The bridge's condition, and its ability to sustain large increases in both the intensity and weight of traffic over the years, have been a focus of public debate since Tuesday's collapse, when an 80-metre span gave way at lunchtime as cars and trucks streamed across it.

Salvatore Lorefice (58), a pensioner who lives a few hundred metres (yards) from the bridge, said cement had fallen off the structure as early as the 1980s when he worked at a warehouse directly under the bridge.

He recalled a visit by a team of Japanese technicians who "came to find out how the structure had deteriorated in such a short time".

Deputy Prime Minister and Interior Minister Matteo Salvini said the private sector manager of the bridge had earned "billions" from tolls but "did not spend the money they were supposed to" and its concession should be revoked.

He was apparently referring to Autostrade.

"Imposing the highest penalties possible and making sure that those responsible for the dead and the injured pay up for any damages and crimes is the very least," he said.

The Pope offered a prayer for the victims and their loved ones in a public address at St Peter's Basilica.

Fire brigade spokesman Luca Cari said 400 firefighters were at the site, helped by cranes that cleared away large rubble and created spaces for rescue teams to check for survivors.

In Paris, France's foreign ministry said four French nationals were among the dead.

Toninelli earlier said he had begun a process to strip Autostrade of its concession and he demanded top managers at the firm resign.

"Autostrade per l'Italia was not able to fulfil its obligations under the contract regulating management of this infrastructure," Toninelli said on RAI 1 state TV, adding he would seek to levy heavy fines against the company that could reach up to 150 million euros.

Autostrade's top two officials have no plans to resign, a source familiar with the matter said on Wednesday.

The Morandi Bridge, named after the engineer who designed it, forms part of the A10 motorway run by Autostrade. The 55-km stretch of the A10 accounts for around 1.7 percent of total network traffic for Italy's biggest toll road operator, according to one analyst's estimate.

"The top management of Autostrade per l'Italia must step down first of all," Toninelli said in a Facebook post.

He also said the government would inspect the structure of ageing bridges and tunnels across the country with a view to launching a programme of remedial works if required.

Within hours of the disaster, the anti-establishment government that took office in June said the collapse showed Italy needed to spend more on its dilapidated infrastructure, ignoring EU budget constraints if necessary.

Genoa police put the death toll at 39, with 16 injured. 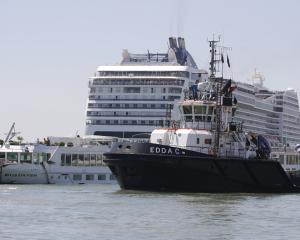 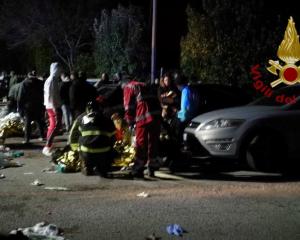 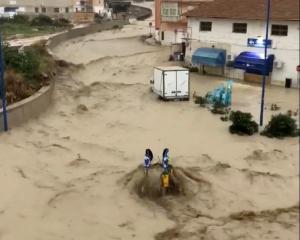 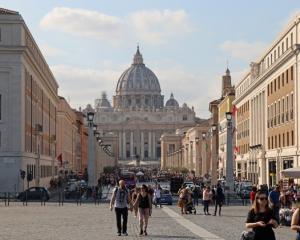 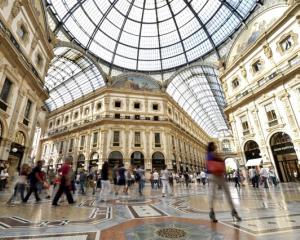 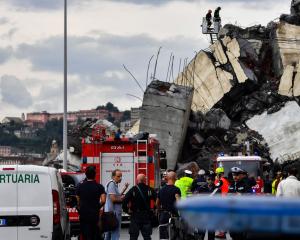 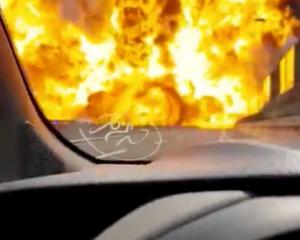 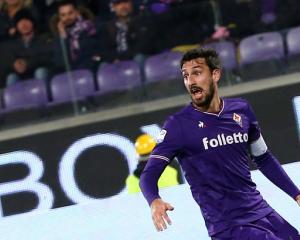