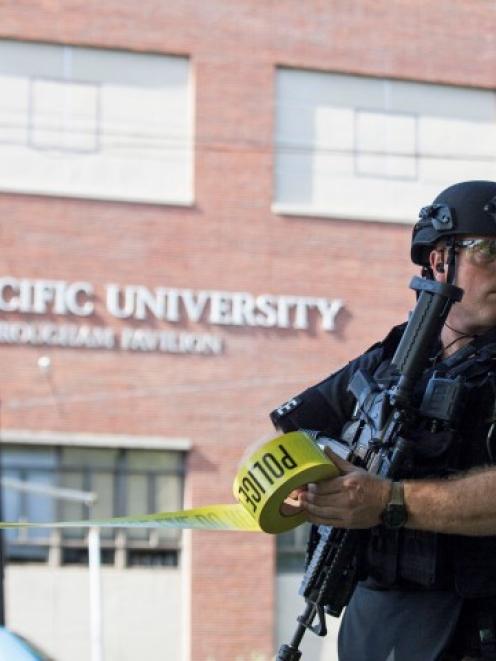 One of the victims, a young man who was taken to Harborview Medical Center, has died, according to the hospital.

Another, a 20-year-old woman, was in critical condition and in surgery. Two others, men ages 22 and 24, are in satisfactory condition; one had gunshot wounds; one was not shot, but the nature of his injuries was unclear.

Two other people were reported to be hurt, although the nature of their injuries was not known, and they were not taken to Harborview.

Seattle police arrested the gunman, who was said to be armed with a shotgun and handgun. Police said a gunman walked into the foyer of Otto Miller Hall at 3:30pm on Thursday (local time) and shot three people.

Police said a student, a building monitor, subdued the gunman as he stopped to reload. Then other students helped hold him down until police arrived. At some point, police said, someone pepper-sprayed the gunman.

A search for a possible second suspect kept medics from getting to injured people inside, said Seattle Fire Department spokesman Kyle Moore.

But police later said there was only one suspect.

SPU student Gloris Jones, 20, was walking from Otto Miller Hall with her mother, Mary Jones, who is visiting from Michigan.

Jones received a text message from a friend who said he had been shot. She sent back five or six messages to the SPU senior, but he didn't reply.

"I don't even know where he is," Gloris Jones said as she hugged her mother. "And you want to make sure he's OK."

Kharis Lund, 19, a sophomore at SPU, said she was in her dorm room at Emerson Hall when she heard sirens.

"We thought that's a lot of sirens, just for something in the neighborhood," Lund said.

Next, she got a mass text from the school reporting the campus was on lockdown, it was not a drill and that a shooter was on campus. SPU is on the north edge of the Queen Anne neighborhood.

Lund said she and several other people in the room locked the doors, closed the blinds and got on the floor.

"It was super-terrifying," Lund said. "There were a lot of people crying and calling their parents."

Lund, who is from Canada, said she couldn't call her parents because of her limited cellphone plan, so she let them know she was unhurt in a Facebook message.

The group in the room remained cautious until they heard a media report that the shooter was apprehended.

Lund said her room is a short distance from Otto Miller Hall, and on the same street. But she did not see what happened, she said.

SPU student Jordan Heff was in class when he heard gunshots coming from a classroom next door.

"I was in physics and people heard a loud bang - we thought it was a science experiment. We heard crying and yelling outside our door. We walked out and there were blood stains all over the carpet."

The suspect was believed to have been driving a white pickup, parked on the northwest corner outside Otto Miller Hall.