An unvaccinated Novak Djokovic will spend Saturday night in Australian immigration detention before seeking a court ruling to stop his deportation, so the world's tennis No 1 can chase a record 21st major title at the Australian Open.

Court documents released after an initial hearing in the Federal Court on Saturday showed Immigration Minister Alex Hawke decided to cancel the Serbian's visa because his presence could foster opposition to Covid-19 vaccination in the country.

It will be a second stint in detention for Djokovic, who spent his first four nights in Australia in hotel detention before a judge freed him on Monday after finding a decision to cancel his visa on arrival had been unreasonable.

"Although I ... accept that Mr Djokovic poses a negligible individual risk of transmitting Covid-19 to other persons, I nonetheless consider that his presence may be a risk to the health of the Australian community," Hawke said in a letter to Djokovic and his legal team.

This explanation in Djokovic's affidavit is more detailed than the brief statement Hawke released on Friday, which said his decision was based on "health and good order grounds".

Justice David O'Callaghan set a hearing on Djokovic's appeal for 9.30am on Sunday (local time), with the question of whether it would be held before a single judge or a full court still to be determined.

Djokovic's lawyers said on Friday they would argue deportation would only further fan anti-vaccine sentiment and would be as much a threat to disorder and public health as letting him stay and exempting him from Australia's requirement that all visitors be vaccinated. 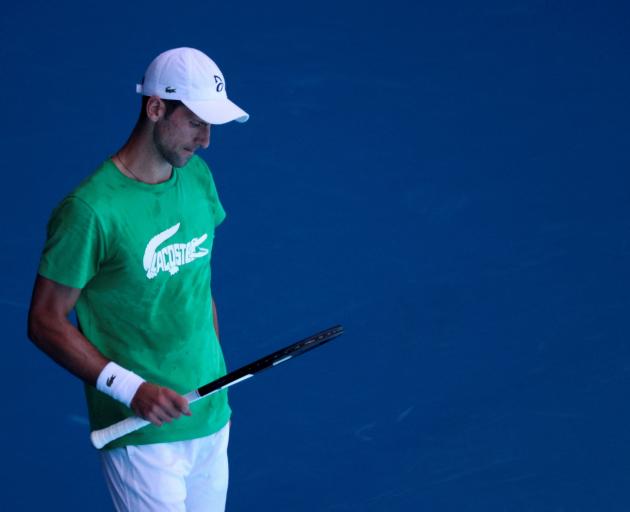 Novak Djokovic practices at Melbourne Park before his visa was again cancelled by the Australian government. Photo: Reuters
A court order on Friday night had required the 34-year-old to surrender to immigration officials for an interview on Saturday morning, before he would be taken to his lawyers' officers for the preliminary hearing. After leaving his lawyers, he is to be taken into immigration detention.

Border Force and the immigration minister's office did not immediately respond to requests for comment on whether Djokovic had attended the interview.

The government has said it would not deport Djokovic until his appeal has been heard. Djokovic wants to be able defend his title at the Australian Open, which begins on Monday. He has won the tournament nine times.

The controversy has overshadowed the traditional build-up to the Grand Slam event, and players were tiring of the saga.

"It feels like it's taking away from us competitors who just want to start. We're just eager to go out and compete," Australian No 1 Alex de Minaur told reporters at Melbourne Park, where the tournament is held.

Greek world No 4 Stefanos Tsitsipas, speaking before Hawke's decision, said Djokovic was "playing by his own rules" and making vaccinated players "look like fools".

Djokovic's medical exemption from vaccine requirements to play the Open prompted enormous anger in Australia, which has undergone some the world's toughest Covid-19 lockdowns and where more than 90% of adults are vaccinated, but hospitalisation rates continue to hit record highs.

With global scientists and policymakers focused on vaccinating as many people as possible to end the pandemic, the refusal of Djokovic to get the jab has fuelled the anti-vaccination movement, especially in his native Serbia and surrounding countries.

Djokovic, scheduled to play fellow Serb Miomir Kecmanovi in the first round of the Open, is hunting a record-breaking 21st Grand Slam title. But instead of hitting Rod Laver Arena on Monday, he could be deported on a flight out of Melbourne.

He has the option of withdrawing and leaving Australia of his own accord. If he withdrew prior to the first day of play, Andrey Rublev would take his spot in the first round.

In Serbia, a health ministry official defended Djokovic against media reports of anomalies in the positive Covid-19 test from December 16 that the player used as the basis for his exemption document.

German news magazine Der Spiegel had said the QR code for the test showed a negative result when first scanned but subsequently a positive one, and questioned when the test was actually taken.

Zoran Gojkovic, a member of the Serbian ministry's Covid-19 crisis-fighting team, said a ministry analysis showed the document to be "absolutely valid."

While Morrison's government has won support at home for its tough stance on border security during the pandemic, it has not escaped criticism for the seemingly inconsistent handling of Djokovic's visa application.

"While the ITF believes that full vaccination is a personal decision, we believe this is the responsible action we must all take in order to ease restrictions and avoid such occurrences happening in the future," it said in a statement.

Djokovic was told on arrival on January 5 that the medical exemption that enabled him to travel was invalid. A court revoked that decision this week on procedural grounds.

But Hawke on Friday exercised his prerogative to cancel the visa "on health and good order grounds, on the basis that it was in the public interest to do so".

Hawke said he had considered information from Djokovic and the authorities, and that the government was "firmly committed to protecting Australia's borders, particularly in relation to the Covid-19 pandemic".

Judge Anthony Kelly, who revoked the first cancellation, said the government had agreed not to deport Djokovic before the case concluded, and that the player could meet his lawyers.

Although Djokovic has publicly opposed compulsory vaccination, he has not campaigned against vaccination in general.

The controversy has nonetheless intensified a global debate over people's rights to choose whether or not to get vaccinated, and become a tricky political issue for Morrison.

"Australians have made many sacrifices during this pandemic, and they rightly expect the result of those sacrifices to be protected," Morrison said in a statement.

"This is what the minister is doing in taking this action today."

Australians have endured some of the world's longest lockdowns, and the country has seen a runaway outbreak of the highly transmissible Omicron variant bring nearly a million cases in the last two weeks.

More than 90% of Australian adults are vaccinated, and an online poll by the News Corp media group found that 83% favoured deportation for Djokovic.

His cause was not helped by an incorrect entry declaration, where a box was ticked stating he had not travelled abroad in the two weeks before leaving for Australia. In fact, he had travelled between Spain and Serbia.

Djokovic blamed the error on his agent and also acknowledged he should not have done an interview and photoshoot for a French newspaper on December 18 while infected with Covid-19.

But the player has been hailed as a hero by anti-vaccination campaigners.

Djokovic's legal team said the government was arguing that letting him stay in Australia would incite others to refuse vaccination.

One of his lawyers told the court that this was "patently irrational" because Hawke was ignoring the effect that forcibly removing "this high profile, legally compliant, negligible risk ...player" might have on anti-vax sentiment and public order.

Djokovic, looking relaxed as he practised on a Melbourne Park on Friday, was included in the draw for the open as top seed.

In Belgrade, some already appeared resigned to Djokovic missing the tournament.

"He is a role model to all of us, but rules must clearly be set," Milan Majstorovic told Reuters TV. "I am unsure how big the involvement of the politics is in that."

Another passer-by, Ana Bojic, said: "He can either vaccinate to remain world number one - or he can be stubborn and end his career."