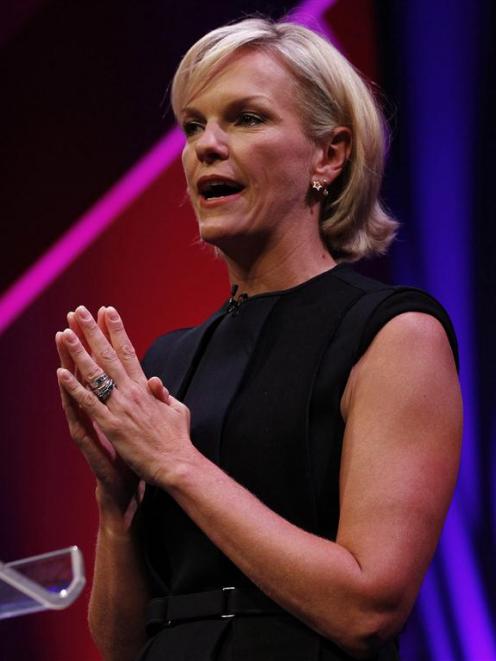 In a speech offering a chance to show her credentials to take over her father Rupert's empire, she said profit without purpose was a recipe for disaster, and the phone hacking scandal at the News of the World newspaper showed the need for a rigorous set of values.

Elisabeth Murdoch - a successful television producer who was overlooked for senior jobs at News Corp that went first to her brother Lachlan and then James - said a lack of morality could become a dangerous own goal for capitalism and for freedom.

She made the remarks in the MacTaggart Lecture at the annual Edinburgh Television Festival, three years after James Murdoch used the same platform to confront a largely hostile audience.

"News (Corp) is a company that is currently asking itself some very significant and difficult questions about how some behaviours fell so far short of its values," she told the packed and receptive audience of British media executives.

"Personally I believe one of the biggest lessons of the past year has been the need for any organisation to discuss, affirm and institutionalise a rigorous set of values based on an explicit statement of purpose."

Rupert Murdoch closed the News of the World last year amid public anger that its journalists had hacked into the voicemails of people from celebrities to victims of crime. A number of former executives have appeared in court in connection with the case, which prompted the government to set up a judicial inquiry into press standards.

The comments from Elisabeth Murdoch, who has powerful friends in the British establishment and the support of her PR husband Matthew Freud, are likely to be examined for whether she could one day run the News Corp empire.

She has rarely spoken in public, despite her role as the founder of the successful production company Shine.

Her highly personal speech appeared designed to win over any doubters, with references to childhood conversations at the breakfast table with father to her continuing affection for the much-loved British playwright Alan Bennett.

She even lavished praise on the state-owned BBC, previously the butt of jokes by James Murdoch.

Referring to her younger brother James's 2009 speech, she said his assertion that the only reliable, durable and perpetual guarantor of media independence was profit had fallen short of the mark.

"The reason his statement sat so uncomfortably is that profit without purpose is a recipe for disaster," she said, perhaps in an allusion to charges that News of the World journalists broke the law to produce ever-more salacious stories and maintain circulation.

"Profit must be our servant, not our master," she said, adding that colleagues needed to accept that they had a responsibility to each other and not just the bottom line.

"It's increasingly apparent that the absence of purpose - or of a moral language - within government, media or business, could become one of the most dangerous own goals for capitalism and for freedom."

It also underlined just how much has changed since the now 39-year-old James Murdoch used his own MacTaggart lecture to accuse the BBC of having "chilling" ambitions.

That speech, delivered in his role as chairman of the pay-TV group BSkyB and head of News Corp in Europe and Asia, consolidated James's position as heir apparent to his father's role, with its echoes of Rupert Murdoch's own 1989 speech that broadcasting was a business that needed competition.

Since then, both men have been chastened by the fallout of the phone hacking affair which has damaged the reputation and value of the company and the family name in Britain.

At the height of the scandal they had to halt a $12 billion bid to buy the rest of BSkyB they did not already own, angering investors and sowing doubts as to whether James had what it took to run the $55 billion empire.

While brother Lachlan was often pictured with the family last year, Elisabeth stayed in the background. Lachlan stood down from his role as News Corp deputy chief operating officer in 2005 after clashing with senior executives.

Now James Murdoch's fall from grace has turned the spotlight onto Elisabeth in the long-running debate over who will one day replace their 81-year-old father at the head of the company.

Stressing her links to her father and the vision he espoused when he built his company over 60 years ago, she spoke in glowing terms of his 1989 speech.

"A quarter of a century later, I am still wholly inspired by those words and they are still deeply relevant today," she said. "My dad had the vision, the will and the sense of purpose to challenge the old world order on behalf of 'the people'.

"I understood that we were in pursuit of a greater good- a belief in better."