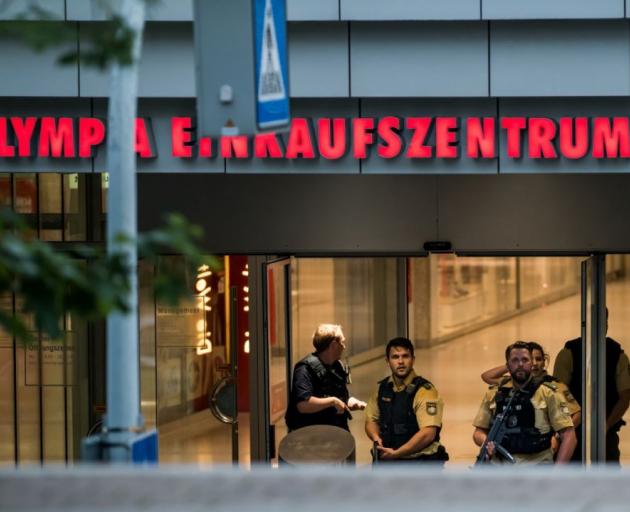 Police officers respond to a shooting at the Olympia Einkaufzentrum (OEZ) at July 22, 2016 in Munich, Germany. According to reports, several people have been killed and an unknown number injured in a shooting at a shopping centre in the north-western Moosach district in Munich. Photo by Getty
An 18-year-old German-Iranian gunman who apparently acted alone opened fire in a busy shopping mall in Munich, killing at least nine people in the third attack against civilians in Western Europe in eight days.

The pistol-wielding attacker, identified by Munich Police Chief Hubertus Andrae as a dual national, was later found dead of a suspected self-inflicted gunshot wound to his head.

He was not identified by name, but Andrae said he was not previously known to police.

Police, citing eyewitness accounts, had initially said they were looking for up to three suspects in the shooting attack at the Friday night (local time) Munich Olympia Shopping Centre that sent shoppers fleeing in panic and shut traffic across the city.

But authorities told a news conference early on Saturday the shooter was believed to have staged the attack alone, opening fire in a fast food restaurant before moving on to the mall.

Sixteen people, including several children, were injured in the attack and three were in critical condition, Andrae said.

There was no known motive for the shooting in Germany's third largest city, which went into lockdown with transport halted and highways sealed off immediately after the attack.

It was the third major act of violence against civilians in Western Europe in eight days. Previous attacks in France and Germany were claimed by the Islamic State militant group.

A police spokesman said there was no immediate indication that it was an Islamist attack but it was being treated as a terrorist incident.

A screen grab taken from video footage shows people being evacuated onto a bus following a shooting rampage at the Olympia shopping mall in Munich, Germany. Photo from Reuters

There was no immediate claim of responsibility but supporters of Islamic State celebrated on social media.

"The Islamic state is expanding in Europe," read one Tweet.

US intelligence officials, speaking on condition of anonymity, said initial reports from their German counterparts indicated no apparent link between the shooter and Islamic State or other militant groups.

Two witnesses told n-tv television that they saw a man dressed as Santa Claus walking away from the scene of the shooting with a crowd of people. One said the man had blonde hair, was not carrying a weapon but had a suitcase.

A video posted online, whose authenticity could not be confirmed, showed a man dressed in black outside a McDonalds by the roadside, drawing a handgun and shooting towards members of the public.

Witnesses had seen shooting both inside the mall and on nearby streets, police said.

Several hours after the shooting, police said it was unclear if the shooters were still in Munich. As night closed in, the streets of the city were largely deserted.

Thousands of people had been crowding the streets and squares in Munich's city centre in the afternoon, clinking glasses, eating sausages, and listening to bands at a beer festival.

The festival was meant to last until Sunday but was evacuated shortly after the attack.

Elena Hakes, wearing a blue traditional dress, had been with a friend in the Odeonsplatz square.

"We heard what had happened and decided to leave, it just seemed not befitting anymore to continue partying."

"Most of the people were very calm and composed. There were a few people who came running towards us who were screaming and in panic. But mostly it was surprisingly calm." 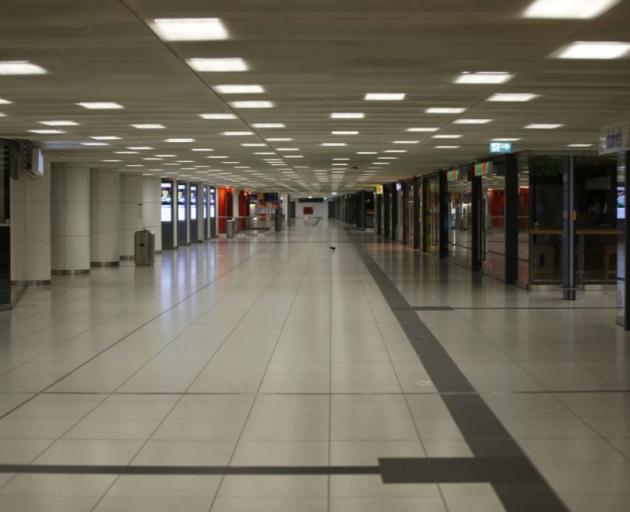 The empty subway of the main train station is pictured following a shooting rampage at the Olympia shopping mall in Munich. Photo by Reuters

Munich's main railway station was evacuated. BR television said police had sealed off many highways north of Munich and people were told to leave them.

The shopping centre is next to the Munich Olympic stadium, where the Palestinian militant group Black September took 11 Israeli athletes hostage and eventually killed them during the 1972 Olympic Games.

Friday's attack took place a week after a 17-year-old asylum-seeker assaulted passengers on a German train with an axe. Bavarian police shot dead the teenager after he wounded four people from Hong Kong on the train and injured a local resident while fleeing.

German Justice Minister Heiko Maas told Bild newspaper's Friday edition before the mall attack that there was "no reason to panic but it's clear that Germany remains a possible target".

The incidents in Germany follow an attack in Nice, France, on July 14 in which a Tunisian drove a truck into crowds celebrating Bastille Day, killing 84. Islamic State claimed responsibility for that attack.

The Munich assault was also reminiscent of Islamist militant attacks in a shopping mall in Nairobi, Kenya, in September 2013 and in Mumbai, India, in November 2008.

Norwegian Foreign Minister Borge Brende said on Twiiter: "Horrible killings in Munich. Taking place on the same day as we mourn & remember the appalling terror that hit Norway so hard five years ago."

Five years ago, Anders Behring Breivik killed 77 people in Norway. Breivik is a hero for far-right militants in Europe and America.

"We don't yet know exactly what's happening there, but obviously our hearts go out to those who may have been injured," Obama said.

British foreign minister Boris Johnson said his country would help Germany in any way it could.

"I am shocked and appalled by the terrible attack unfolding this evening in Munich, and the loss of life. My thoughts are with those injured and the families of those killed," Johnson said in a statement.

"We stand ready to assist our friends in Germany. Our travel advice to UK nationals in the area tonight is to stay indoors and follow the advice of the local authorities."

French President Francois Hollande branded the shooting a "disgusting terrorist attack" and said it was aimed at stirring up fear in Germany after France was targeted last week.

"The terrorist attack that struck Munich killing many people is a disgusting act that aims to foment fear in Germany after other European countries," Hollande said in a statement.

"Germany will resist, it can count on France's friendship and co-operation," he said, adding that he would be speaking with German Chancellor Angela Merkel.

"Today, fighting terrorism, in any form and place, is an urgent demand of the world community ...that should be considered as the top priority by all countries in an international consensus," Iran's Foreign Ministry spokesman Bahram Qasemi was quoted as saying by state news agency IRNA.

This is the third attack against civilians in Western Europe in eight days, coming after a young Afghan attacked train passengers in Germany and a truck ploughed into crowds in France during Bastille Day celebrations.

Both those attacks were claimed by Islamic State.

The timeline below shows deadly attacks by militants in Europe over the past two years: