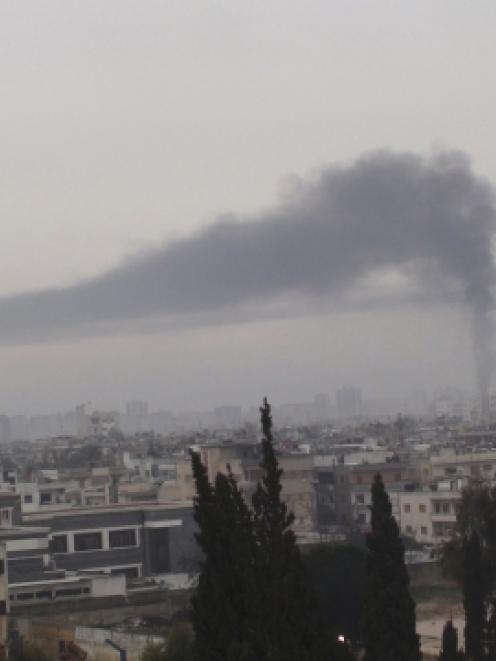 Some say starvation is a real threat and accuse the world of abandoning them to army shelling which they say has killed dozens of people and wounded 2,000 in the rebel stronghold of an 11-month uprising against President Bashar al-Assad.

With no chance to flee, many families have abandoned their houses on the outskirts and retreated further into the heart of the battered neighbourhood in the central western city of Homs, cramming dozens of people into small houses and apartments.

Those who survive the shelling face shortages of food and water which they say have been deliberately aggravated by government snipers shooting at water tanks. They are terrified to leave their homes and shelters.

"We are collecting rain water in jars and casseroles," said Abu Bakr, a resident of Baba Amro sheltering with 25 people in a two-room house.

"We take turns in sleeping - some during the day and others during the night because we do not have enough space," he said.

Women who recently gave birth are unable to feed their babies because their breast milk has dried up from shock, he said. "Some women have volunteered to breast feed those babies but until when? Their lives are in danger."

The shelling destroyed many houses in the poor neighbourhood of 80,000 people and the few field hospitals erected months ago are in ruins, activists say. At least two doctors and two nurses were killed in the shelling, leaving Baba Amro with just two or three doctors, they say.

Some houses were turned into makeshift hospitals but the lack of medical supplies and staff mean there is little help for the wounded.

"We are watching the wounded die. All we are doing is using pieces of clothes to cover their wounds then watch them die," said another resident of Baba Amro, who declined to be named.

"We have lost many people and every day we have friends and relatives dying before our eyes, there is nothing we can do."

The government says it is fighting armed militants intent on overthrowing Assad who are funded and armed from abroad while the residents say the crackdown is aimed at crushing pro-democracy protesters and those opposed to Assad.

The International Committee of the Red Cross (ICRC) told Reuters that it was negotiating with Syrian authorities and opposition fighters on a "cessation of fighting" to bring life-saving aid to civilians hardest hit by the conflict.

Diplomatic sources said the ICRC was seeking a two-hour halt of hostilities in hotspots including Homs, a major industrial centre and Syria's third largest city, next to Damascus and Aleppo.

In some areas of Homs, the Free Syrian Army rebels set up checkpoints to try and block access to soldiers and Shabbiha militia loyal to Assad.

In Baba Amro, where many residents are farmers and traders, the massed troops on the outskirts of the district mean farmers are prevented from harvesting their crops.

"If people do not die of the shelling they will die of starvation soon," said an activist, who used the name Marx.

Markets are closed after running out of supplies and residents are living on supplies of pickled eggplants, olives and dried bread. Vegetables and meat have become a luxury, residents said. Phone lines and Internet are cut off.

When at least 217 people were killed in a shelling on Homs's Khalidiya district earlier this month, activists in nearby Baba Amro said their neighborhood would be next and they took measures to ensure the outside world could see.

Activists have broadcast live footage and uploaded hundreds of videos of graphic footage on YouTube showing the intensity of shelling, destruction, death and wounded people.

But they still feel they have failed to draw the world's attention. Foreign powers have yet to take measures to stop the killings, they say, or even allow safe passages to evacuate women and children and the critically wounded.

"The world has abandoned us, we are alone and we do not count, nobody cares what happens to us," said Ahmad.

Anger is also rising against the Syrian opposition, who residents say have stood by and watched the slaughter.

"We feel that the opposition has let us down ... Everybody is fooling us and using us for their own interests and we are the ones paying the price," Marx said.

Khaled Abu Salah, an activist in Baba Amro, sent a distress call to the main opposition group the Syrian National Council, comparing his city's suffering to the violent suppression of a 1982 Islamist uprising in Hama, when forces loyal to Assad's father killed at least 10,000 people.

"We are being bombarded and we are dying. We are living the 80s with all its scenarios and until now you have done nothing," he said in a YouTube video, standing in front of a shelled house.

"We hold you fully responsible. The people said that the SNC represent us and the people will delegitimise you (if you do nothing)," he said.