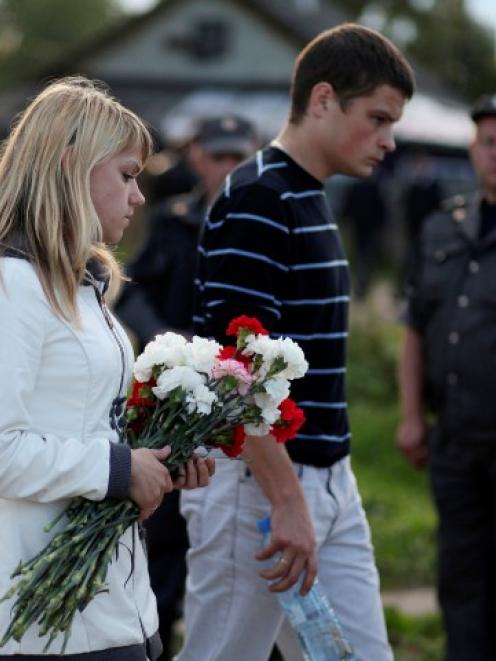 People bring flowers to the site of a plane crash that killed 43 people near the Russian city of Yaroslavl. Photo: REUTERS/Sergei Korolyov
A passenger plane carrying a Russian ice hockey team to a season-opening match has crashed after takeoff from a provincial airport, killing 43 people and plunging the Russian and international sports world into grief.

The Yak-42 aircraft slammed into a river bank near Yaroslavl, home city of the Kontinental Hockey League team Lokomotiv, whose Russian and foreign stars were on board flying to a match in Minsk, Belarus.

Among international victims were three Czech world champions, a Swedish goalkeeper, a renowned Slovak forward and a Canadian coach. Many had played around the world, including in North America's National Hockey League.

"This is the darkest day in the history of our sport," International Ice Hockey Federation President Rene Fasel said in a statement posted on the federation website www.iihf.com after the crash of the Yak-42 aircraft.

"This is not only a Russian tragedy, the Lokomotiv roster included players and coaches from ten nations."

The Russian-made plane was carrying 37 passengers and eight crew when it crashed a few kilometres from the airport at Tunoshna outside Yaroslavl, 250km north of Moscow, the Emergencies Ministry said.

"I heard a big bang and then a louder one 10 seconds later," said Andrei Gorshkov, a 16-year-old Tunoshna resident. "Flames shot high and a column of black smoke rose into the air."

He said he had seen the plane about 300m over the village, its nose pointing at a downward angle, then lost sight of it as it fell.

When he ran to the site, he said: "The wheel assembly was burning, half the plane was in the water, seats were floating and two people lay dead."

Russian President Dmitry Medvedev expressed condolences to relatives of the victims in a Kremlin statement and on the Internet. "Lokomotiv fans are grieving, the whole country is grieving," he wrote on Twitter.

In Yaroslavl, thousands of fans and residents gathered in the streets after dark, waving team scarves in Lokomotiv's red, blue and white colours and chanting slogans like "Loko lives!". Candles lit in memory of the dead flickered on a sidewalk.

Russia is hosting an international political forum in Yaroslavl that Medvedev, who has said he may run for a second term in March, was expected to address on Thursday.

Medvedev's spokeswoman, Natalya Timakova, said he would alter his plans for the forum. The Kremlin said he would visit the crash site.

Lokomotiv offenseman Alexander Galimov was in critical condition with burns over 90 percent of his body, a doctor at the hospital said. He said the other survivor, a crew member, was in serious condition.

The KHL's opening match in the city of Ufa was interrupted by news of the crash, stunning spectators and sports officials. A minute's silence was declared and the match postponed.

Czech players Jan Marek, Karel Rachunek and Josef Vasicek, all stars of the national side that won the world championship six times since 1996, were killed, the Czech embassy in Moscow said. Swedish goaltender Stefan Liv was killed, officials said.

The Slovak foreign ministry said the only Slovak national on the passenger list was Pavol Demitra, a forward who led the national side at last year's World Championship.

"This tragedy represents a catastrophic loss to the hockey world -- including the NHL family, which lost so many fathers, sons, teammates and friends who at one time excelled in our League," NHL commissioner Gary Bettman said in a statement.

At the scene, a broken piece of the plane's light-blue fuselage lay half-submerged in a river on the edge of Tunoshna, a village near the airport, which has the same name.

A green police boat plied the waters and a helicopter buzzed overhead as emergency workers waded in the shallows near a fire engine on shore and divers searched beneath the surface . A few modest wooden houses stood just metres (yards) from the site.

Citing an official at the state aviation agency Rosaviatsia, the Interfax news agency reported that the plane had trouble gaining altitude and hit an antenna beyond the runway.

Interfax cited an aviation industry source as saying a problem with one of the plane's three engines could have doomed the plane, but there was no official word on the cause.

The crash was the third in Russia with a toll in the dozens in less than two years . In June a Tupolev Tu-134 jet slammed into a roadside while trying to land in fog in the northern Russian city of Petrozavodsk, killing 45 people.

In April 2010, Polish President Lech Kaczynski's Russian-built plane crashed near the western city of Smolensk in a thick fog, killing him and all 95 others on board.

An Antonov An-12 cargo plane crashed in August in Russia's Far East, killing 11, and an An-12 crash in Siberia in July killed seven.

Russia's transport industry also came under scrutiny in July after an overcrowded riverboat sank in the Volga, killing 122 people in an accident widely blamed on negligence and corruption leading to safety violations.

The Yak-42 is a three-engine mid-range jet that entered service in 1980 and can carry 120 passengers.

The most recent fatal Yak-42 crash occurred in 2003, when a Ukrainian-operated craft crashed while landing in fog in Turkey, killing 75 people including Spanish troops returning from Afghanistan.