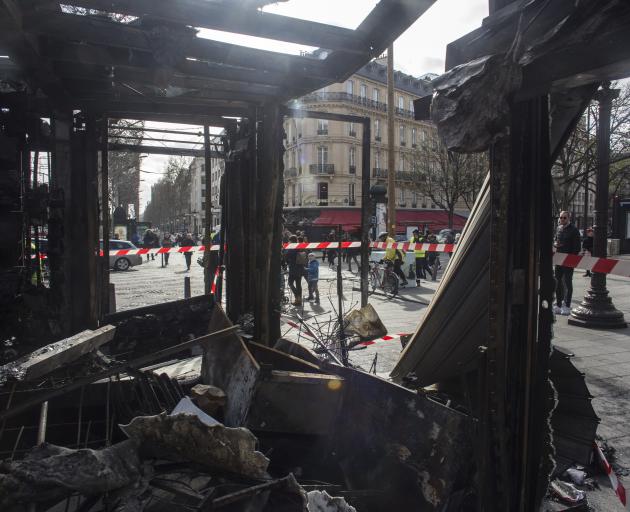 The burned out remains of well known restaurant Le Fouquet on the Champs Elysees. Photo:AP
France's Prime Minister has announced a ban on yellow vest protests along the Champs-Elysees Avenue in Paris and in two other cities after riots at the weekend that left luxury stores ransacked and charred from fires.

Edouard Philippe said the ban will apply for an unspecified period in the suburbs that have been "the most impacted" in the cities of Paris, Bordeaux and Toulouse, where repeated destruction has occurred since the yellow vest protest movement began in November.

Philippe announced the measures following a meeting with French President Emmanuel Macron and top security officials that sought to avoid a repeat of Saturday's violence, in which rioters set life-threatening fires, ransacked luxury stores and attacked police around the Champs-Elysees. Many of those high-end boutiques remained closed on Monday, some of them charred from arson fires set.

He acknowledged "dysfunction" in French police operations on Saturday, rejecting "inappropriate" orders given to security forces to use fewer rubber bullets following a controversy about the numerous injuries they've caused at previous protests.

Philippe also announced a shift in security strategy to allow police forces to have a greater initiative on the ground to take measures against rioters and disperse crowds. He said police will use new tools, including drones and video surveillance, to help preventing violence and send rioters to trial.

"When a protest has been banned and its aim is to ransack and loot, all of those who take part it in and, in fact, protect looters, encourage them or glorify them online, are complicit and will have to face the consequences," he said.

Philippe promised "nothing will change" for other peaceful, authorized protests. 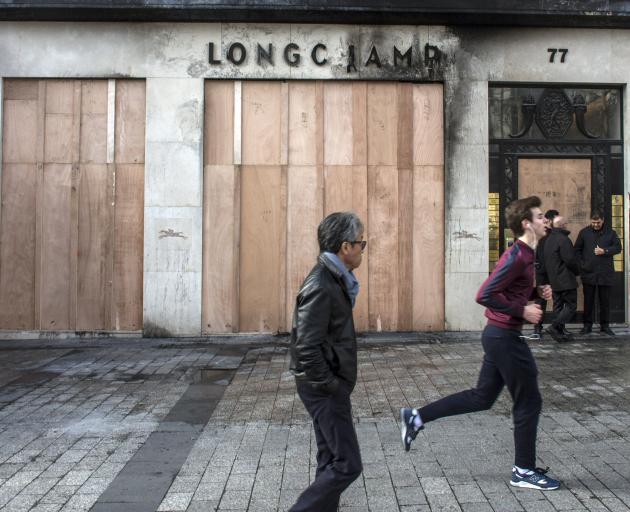 Luxury stores along one of Paris' most famous streets were targetted. Photo: AP
The surge in violence came as the four-month-old yellow vest movement, which is pressing for more economic justice, has been dwindling. Images of the destruction on Saturday -including from a bank fire that engulfed a residential building and threatened the lives of a mother and child - could further erode public support.

But the renewed attention energised some protesters, who took to social networks to call for new protests this Saturday to demand lower taxes and more support for workers.

The Finance Ministry held a meeting on Monday with groups representing small businesses, restaurants, hotels, insurance companies and banks to estimate the economic impact of the protests.

The Paris region's Chamber of Commerce said 91 businesses suffered consequences from Saturday's riot at the Champs-Elysees, 80% of which were severely damaged. It called for an "emergency plan" to support those shopkeepers and employees.

Last month, the French Parliament passed a bill backed by Macron's government to further prevent violence during protests and to help authorities maintain order. But the "anti-troublemakers" law has not yet taken effect since the Constitutional Council must assess it first.

It would authorise regional prefects to prevent people seen as a serious threat to public order from protesting, and would force protesters involved in violence to pay for damages. It would also make it a crime for protesters to conceal their faces, punishable by up to one year in prison and a €15,000 ($NZ24,800) fine.

The bill has been criticised by rights groups, opposition members and even members of Macron's centrist party as going too far in restricting freedoms.

Protesters sought to raise their profile Saturday to mark end of a national debate that Macron had organised to respond to their concerns about sinking living standards, stagnant wages and high unemployment. Many demonstrators feel the debate did not succeed.

Yet after offering French workers a series of economic concessions to address their complaints, Macron, the protesters' target, is now resurgent in the polls.