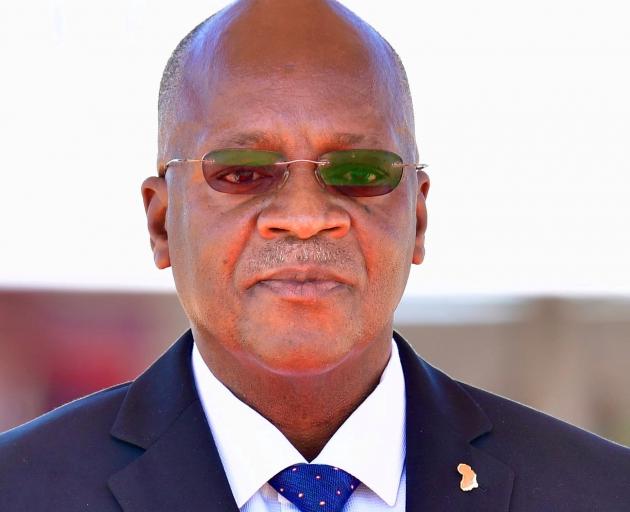 President John Pombe Magufuli. Photo: Tanzania State House via Reuters
President John Magufuli says Tanzania did not need a coronavirus lockdown because God would protect his people and homespun precautions such as steam inhalation were better than dangerous foreign vaccines.

Contradicting global scientific consensus and advice from the World Health Organidation (WHO), Magufuli's government has largely eschewed mask-wearing and social distancing in Tanzania.

"Vaccines are not good. If they were, then the white man would have brought vaccines for HIV/AIDS," Magufuli said during the opening of a new farm in his western home region.

Tanzania has not published nationwide figures since May 8, when it had 509 cases and 21 deaths, according to WHO data.

Unlike most nations, Tanzanians are still allowed to gather, for example, to watch sport.

Magufuli won re-election last year in the former British colony but has faced accusations from Western countries and opposition parties that he is eroding democracy, which he denies.

'THEY WILL SCARE YOU'

The president has rubbished imported testing kits, saying they also returned positive results on a goat and pawpaw fruit. He has promoted traditional remedies, without offering data or scientific evidence.

"We will also continue to take health precautions including the use of steam inhalation," he said.

"You inhale while you pray to God, you pray while farming maize, potatoes, so that you can eat well and corona fails to enter your body. They will scare you a lot, my fellow Tanzanians, but you should stand firm."

Without giving any evidence, Magufuli said vaccines may be part of a foreign plot to steal Africa's wealth.

"Tanzanians should be careful with these imported things. You should not think that they love you a lot. This nation is rich, Africa is rich, everyone wants some of it," he said.

"I know some Tanzanians who left the country to other countries and got vaccinated. From there, they brought a strange type of corona. Stand firm."