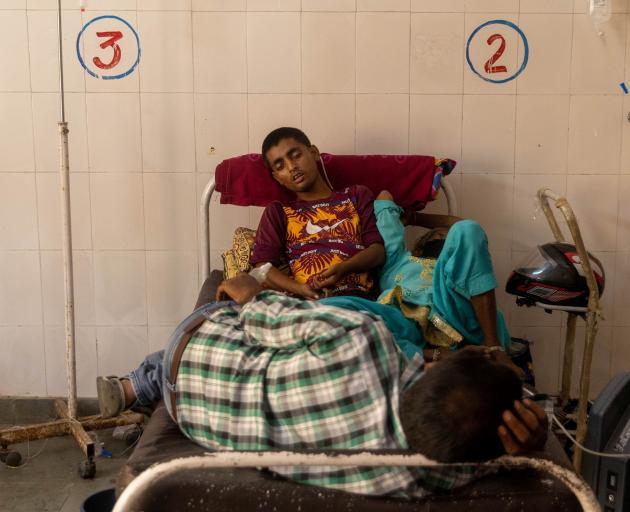 Patients receive treatment inside a Covid ward of a government-run hospital in Bijnor district, Uttar Pradesh. Photo: Reuters
In the emergency room of a public hospital in northern India on Tuesday, a man was trying to revive his mother who had just died from Covid-19-like symptoms.

On another bed, a young man who had tested positive was sitting up and making an effort to breathe while two members of his exhausted family were sprawled on the tiny bed.

The one doctor on duty in the ER in this hospital in Bijnor, a town in India's most populous Uttar Pradesh state, 180km east of Delhi, can barely attend to the stream of patients that are coming in, in rickety ambulances or in the back of cars.

India's brutal second wave has reached the small towns and the countryside, ripping through a fragile health system not equipped to deal with such a large public health crisis.

Doctors are hard to come by, intensive care units are expensive and scarce, and patients are packing into emergency rooms. People flit in and out, trying to help with everything from procuring oxygen cylinders to artificial resuscitation.

"We are trying our best, the numbers are large," said Ramakant Pandey, the top district official at Bijnor. Unlike the first wave, this one is more severe, he said.

"We are also not getting much time between the time a person gets infected to the time he becomes serious."

The seven-day average of daily infections nationwide hit a record 390,995 on Tuesday, with 3876 deaths, according to the health ministry.

On Tuesday, four people died in the Bijnor hospital ER within the space of an hour including Jagdish Singh (57) who had arrived just a few minutes before. His son Gajendra said he took him to hospital believing it would help raise his oxygen levels.

At the hospital he said he ran around trying to get the oxygen going and then he lost his father.

Dr Naresh Johri, who was running the ER along with two assistants, said he was not in a position to speak to the press in line with service rules.

Medical oxygen has become a major concern with top hospitals in Delhi and other major cities issuing SOS calls that they were running out of supplies of the life saving gas because of the crush of patients.

The government is now trying to arrange supplies from abroad and from local industry. While the situation in Delhi has improved, smaller towns like Bijnor are struggling.

Many choose not to go to hospitals believing they won't get much care. In Jhaalu village, 11km from Bijnor, family members of Shakeel Ahmed were reading the Koran as he lay gasping for breath.

"We are trying to avoid hospitals, we don't trust the system," his brother Bhure Ahmed said.

Scores of bodies are washing up on the banks of the Ganges as Indians fail to keep pace with the deaths and cremations.

India currently accounts for one in three of the reported deaths from coronavirus around the world, according to a Reuters tally, and its health system is overwhelmed, despite donations of oxygen cylinders and other medical equipment from around the world.

Rural parts of India not only have more rudimentary healthcare, but are now also running short of wood for traditional Hindu cremations.

Authorities said on Tuesday they were investigating the discovery of scores of bodies found floating down the Ganges in two separate states.

"As of now it is very difficult for us to say where these dead bodies have come from," said M P Singh, the top government official in Ghazipur district, in Uttar Pradesh.

Akhand Pratap, a local resident, said that "people are immersing bodies in the holy Ganges river instead of cremation because of shortage of cremation wood".

Even in the capital, New Delhi, many Covid victims are abandoned by their relatives after cremation, leaving volunteers to wash the ashes, pray over them, and then take them to scatter into the river in the holy city of Haridwar, 180km away.

"Our organisation collects these remains from all the crematoriums and performs the last rituals in Haridwar so that they can achieve salvation," said Ashish Kashyap, a volunteer from the charity Shri Deodhan Sewa Samiti.

Official Covid-19 deaths, which experts say are almost certainly under-reported, stand at just under a quarter of a million.

The World Health Organisation said on Monday that it regarded the coronavirus variant first identified in India last year as a variant of global concern, with some preliminary studies showing that it spreads more easily.

Late that day, 11 people died in the government SVR Ruia hospital in the southern city of Tirupati because a tanker carrying oxygen arrived late.

Vaccines are also running short, especially in Maharashtra state around the financial centre of Mumbai, and in the capital, Delhi, two of India's hardest-hit regions.

"We are ready to buy doses, but they are not available right now," Maharashtra health minister Rajesh Tope told reporters.

India's second wave of the pandemic has increased calls for a nationwide lockdown and prompted more and more states to impose tougher restrictions that have hurt businesses and the wider economy.