Authorities in Western Australia were urging residents of its Mid West coast to find safe shelter or leave on Saturday as cyclone Seroja barrelled towards a coastal region that is usually too far south to fall in the path of cyclones.

Residents in Western Australia's Mid West and Gascoyne regions are being urged to finalise their emergency plans, as the cyclone is expected to intensify to a category three overnight, battering a region where buildings are not made to withstand cyclonic winds.

"This is a very serious situation. The potential for widespread devastation is high," state Emergency Services Minister Fran Logan said on the Australian Broadcasting Corporation (ABC).

"We hope that we can get through these next few days without loss of life and without serious property damage. We need to work on the basis of worst case scenario," she said, adding that cyclonic winds had not been seen in the area for decades.

Australia's Bureau of Meteorology forecasts destructive winds with gusts to 150 km per hour (93 miles per hour), and heavy rains that could cause significant damage to coastal communities as the cyclone moves across the coast and further inland.

This area is much further south of Port Hedland, the world's largest iron ore export hub, which withstands several cyclones a season and where houses are built to stronger standards. 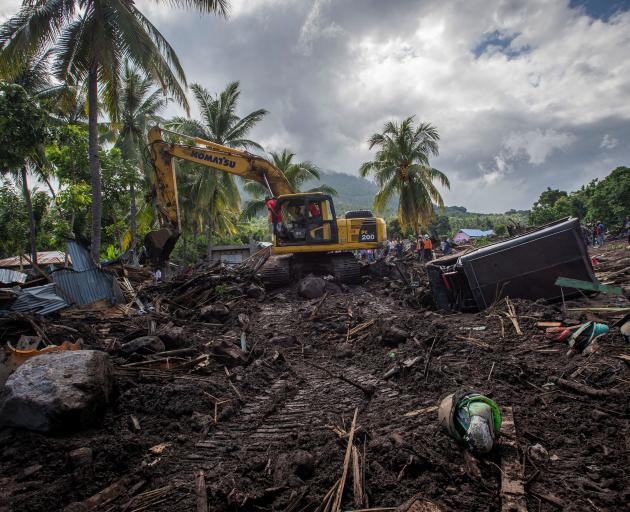 Gregorius Hide, a 70-year-old farmer in the eastern Indonesian province of East Nusa Tenggara, said the only warning he had of an approaching swirl of muddy water that engulfed his district this week was a smell of wet earth shortly before it hit.

Tropical cyclone Seroja, one of the most powerful cyclones ever to hit Indonesia, struck on Sunday killing 163 people, mostly on the islands of Lembata, Alor and Adonara, among the poorest and least developed parts of Indonesia.

The sprawling archipelago, which is made up of more than 17,000 islands, is used to dealing with disasters ranging from earthquakes to volcanic eruptions. But cyclones of this power have been rare, leaving many areas poorly prepared.

"There were no government warnings in the village," said Gregorius, recounting how he managed to flee with his family before returning to help treat injured neighbours and assist those who had lost everything.

Authorities will need to learn fast from the disaster since Indonesia's weather agency (BMKG) has warned once-rare tropical cyclones are happening more often, with another potentially damaging cyclone due to hit this week.

Activists and researchers point to a slow response to Seroja, with little early warning infrastructure in place.

"We should've evacuated faster, like predicting when it would happen, who to evacuate," said Dominikus Karangora of the Indonesian Forum for the Environment (WALHI), a non-governmental group, in East Nusa Tenggara. Some residents used traditional means to warn people, with reports of mosques using loudspeakers and church bells to warn of imminent danger. Indonesia's weather agency feeds warnings to local disaster mitigation agencies and also provides warnings on its website.

Isyak Nuka, head of the disaster mitigation agency in East Nusa Tenggara, said such measures were usually effective, but the scale of flash floods and landslides was "unprecedented".

Isyak pledged to use this disaster as a lesson to strengthen the system.

Erma Yulihastin, a climatologist at the Indonesian National Institute of Aeronautics and Space, said Seroja was an anomaly in its destructive force since such cyclones do not usually gain traction in a country straddling the equator.

"Tropical cyclones don't happen that much, but when they happen the damage is extraordinary," she said.

Agie Wandala Putra, a researcher at BMKG, said Indonesia's preparedness was currently skewed towards guarding against disasters such as earthquakes and tsunamis and needed to put more attention on events like flooding, cyclones and droughts.

"What needs to be emphasized is not just early warning, but also our response capacity," he said.