`No such remark' at debriefing 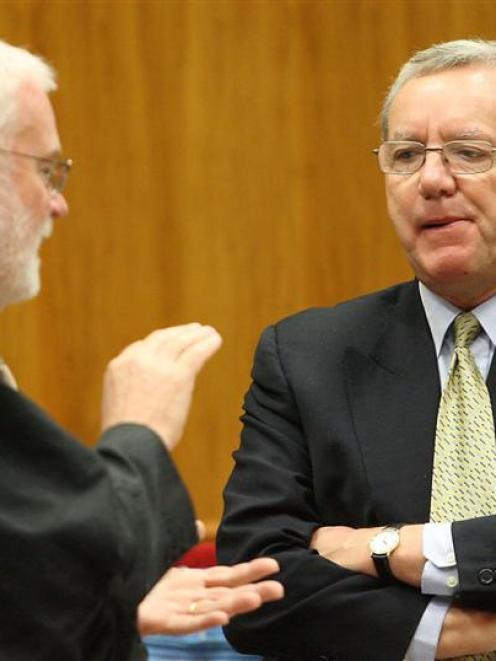 Crown counsel Kieran Raftery, QC (left) talks to defence counsel Michael Reed, QC.
Members of Margaret Bain's family say they were never told by a police officer that David Bain was "the enemy" and they were "going to get him".

Margaret's sister, Jan Clark, said she did not hear any such remark and would have been "appalled" if she had.

Mrs Clark and her brother-in-law, John Boyd, were recalled by the Crown yesterday to rebut evidence from Robin Bain's cousin, Michael Mayson, who said he heard an officer making the comment during a family debriefing after the Bain family funerals in June 1994.

And Mrs Clark said she was "absolutely astounded" when she heard what Mr Mayson said.

She did not believe the comment was made and that she had missed it, she told Crown counsel Kieran Raftery.

It would have been "completely inappropriate" in the circumstances and, had it been said, she would have immediately challenged the person and made a complaint, Mrs Clark said.

"David is a member of our family," she told the court, and for something like Mr Mayson described to have been said "on top of the tragedy", would have been very upsetting.

The police had been "very compassionate and concerned for all of us", including those who had died and David Bain himself, Mrs Clark said.

Inspector Peter Robinson and Detective Senior Sergeant Jim Doyle had spoken to the family and neither of them had said anything like Mr Mayson described, Mrs Clark said.

Mr Boyd, who also heard Mr Mayson's evidence, said he did not recall any remark about David being the enemy and the police being out to get him.

In the context of the meeting and compassionate way police were treating them, he would have been very surprised and would have found it upsetting.

"I heard no such remark," Mr Boyd said.

He had "no idea whatsoever" why Mr Mayson might have said what he did, he told defence counsel Michael Reed QC.