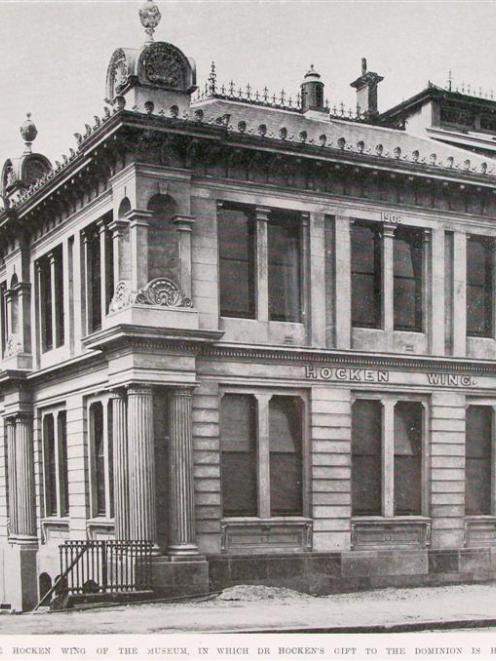 The Hocken wing of the Otago Museum, in which Dr T. Hocken's magnificent gift to the people of the Dominion is housed. - Otago Witness, 6.4.1910.
• Although the forthcoming season is to be a close one for native game, according to law, there has not been a time for some years past when wild pigeons were so plentiful in the Catlin's Bush.

A representative of the Free Press, who has just returned from a trip through the bush to Tautuku, reports that there have been cases of wanton destruction which have aroused the indignation of the settlers.

The other day a settler came across a large heap of dead pigeons which had been shot and left to rot under a tree.

• The long list of Chinese receiving charitable aid in the Clyde district, coupled with the fact of the extreme age of a number of the recipients, has always been viewed with a certain amount of suspicion by the local board (says the Dunstan Times), the opinion being often expressed that aid was probably being granted to persons no longer in existence.

The outcome of a discussion on this subject at Friday's meeting is that a muster of the Chinese recipients is to be made at Cromwell and Alexandra, when the roll will be called over and the list will be purged of all failing to answer to their names and any who appear to be capable of earning their livelihood.

• Some of the settlers in the Catlins district used to make a little sum of money annually from blackberries.

The Free Press states that those settlers who have been cultivating blackberries on their sections consider they arebeing harshly treated.

• A strong deputation waited on the City Council last night to urge the necessity of public baths in the city.

Meetings already held by citizens of North Dunedin tended to show how public interest had been worked up. Baths would cost about 4000.

A deputation member, Dr Closs, remarked that he was surprised this matter had not been proceeded with some years ago.

He advocated the erection of baths for both health and educative reasons and he thought the council could easily erect three baths in the city - north, south, and central.