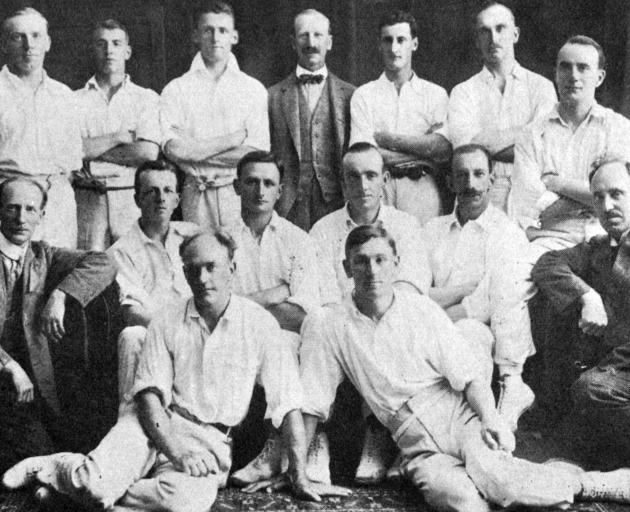 The Otago representative cricket team that toured the dominion (from left; back row) R.C. Torrance, G. Dickinson, H. Duncan, manager A. Martin, W. Westbrook, H.G. Siedeberg, N. Conradi; (second row) W.W. Mackersy, J.M. Smith, J. McMullan, captain T. Carlton, C. Chadwick, J. Robson; (front) A. Gallard, J. Shepherd. — Otago Witness, 24.1.1922
The Minister of Finance has bluntly stated in Parliament that the alternative to a reduction of salaries and wages in the public service is a reduction in the number of public servants. Its personnel might be cut down considerably without detriment to the efficiency of the service. If, however, a reduction of staff were made by the Government as a step preferable to a reduction of salaries, the effect would necessarily be to aggravate the unemployment difficulty. The Government is pursuing the less drastic course. If it decides against a reduction in the number of public servants as being a measure that would cause a great deal of personal hardship, it is shut down to the adoption of a plan of retrenchment such as it is proposing. Retrenchment there must be in some form or other. Increased taxation is out of the question. It would involve confiscation of capital and would be productive of economic ills of a grave character. No person who is desirous of avoiding industrial disaster would suggest that the public receipts and expenditure should be balanced by the imposition of fresh taxation. Liquidations on a large scale would be the result of the adoption of a suggestion so egregious. Hundreds of people of slender means, living on the proceeds of their investments, would be forced into bankruptcy, and thousands of men and women would be deprived of work.

Mr G.A. Martin, manager of the recent Otago touring team, reported that the team left Dunedin with 13 men. The first misfortune which occurred was at practice, when Duncan sprained his knee, and this kept him out of both the Canterbury and Auckland matches. In the Canterbury match Eckhold received a severe knock on the leg in the second innings, which prevented him from taking any further part in the tour. Siedeberg was also injured in this match, and had been partly a cripple since.

The match and visit to Auckland was most enjoyable, and the northern team very generously lent Otago a fielder when Siedeberg was disabled, and also allowed a man to run for him.Throughout the tour many of the Otago batsmen showed glimpses of their true form. The report continued that if determination and the desire to do their best should have merited success, then the Otago men deserved it.

In conclusion, Mr Martin recommended that for future touring teams young men be selected, who could stand up to the work of such a tour as the one just concluded, and that the team be picked at least a month or six weeks beforehand to allow the men to get fit, for three days’ cricket in Auckland was much more severe than three days’ play here. ODT, 27.1.1922.