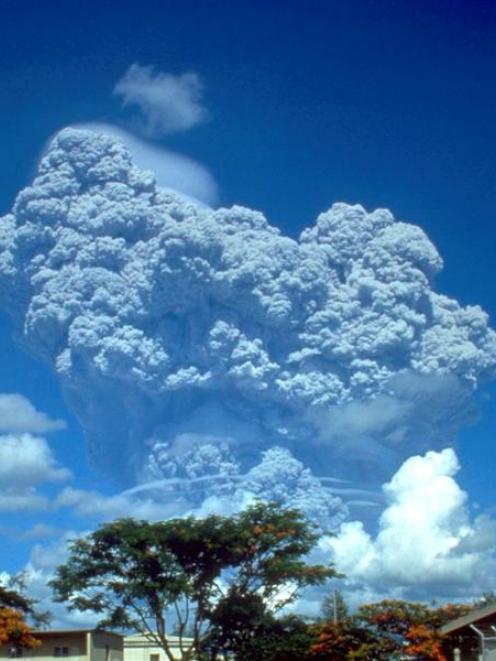 The Mt Pinatubo eruption in 1991, the world's largest in recent times, was tiny compared with a 'supervolcano'. Photo by USGS/Richard P. Hoblitt.
The good thing about volcanoes is that you know where they are.

If you don't want to get hurt, just stay away from them. The bad thing about supervolcanoes is that you may know where they are, but there's no getting away from them. They only blow up very rarely, but when they do, the whole world is affected. They can cover an entire continent with ash, and lower temperatures sharply worldwide for years.

''This is something that, as a species, we will eventually have to deal with. It will happen in future,'' said Wim Malfait of ETH Zurich (the Swiss Federal institute of Technology), lead author of a recent paper in Nature Geoscience that says supervolcano eruptions don't even need an earthquake as a trigger.

''You could compare it to an asteroid impact,'' he says.

''The risk at any given time is small, but when it happens the consequences will be catastrophic.''

I know you already have enough to worry about, what with climate change and asteroid strikes and the like, but I'm afraid there's more.

Volcanoes and supervolcanoes both involve magma (molten rock deep underground) that breaks through to the surface, but in practice they are quite different. Volcanoes gradually build themselves into mountains by repeated, relatively modest eruptions of lava. Supervolcanoes are a single massive explosion of magma rising to the surface over a huge area, and blasting at least a thousand cubic km. of ash into the atmosphere.

How massive? The largest recent volcanic eruption was Mt Pinatubo in the Philippines, which blew about 10 cubic kilometres of ash and gas into the upper atmosphere in 1991. The result was a 0.4degC drop in average global temperature for a year or so. But the eruption of the Yellowstone supervolcano 640,000 years ago was a hundred times as big.

It covered the entire North American continent with ash - and just like an asteroid strike, it threw massive amounts of dust and ash into the stratosphere, where it stayed for years, blocking out much of the sunlight. (It doesn't rain in the stratosphere, so the debris stays there for a long time.) As a result, the average global temperature fell by as much as 10degC for a number of years.

It was temporary, but while it lasted there was a steep fall in the amount of plant material growing on the planet, and a corresponding collapse in animal populations as well. Not mass extinctions, so far as we can tell, and fairly soon the plant and animal species repopulated their former habitats, but it certainly spoiled the party for the equivalent of several human generations.

Homo sapiens was not around 640,000 years ago, but people like us certainly were around when another supervolcano, Toba in northern Sumatra, blew about 73,000 years ago. The event has been tentatively linked with a ''bottleneck'' in human evolution at that time in which, according to some genetic studies, the human population was squeezed down to only around 1000 people.

This hypothesis has been challenged by a recent study of the sediments in Lake Malawi by an Oxford University-led team. They did not find any layer in the sediments with much reduced vegetation, which you would expect to see if there were a long-lasting cooling of the climate. This is puzzling, since Toba was the biggest supervolcanic blast in 2.5 million years: it boosted two to three times as much dust and ash into the air as the Yellowstone eruption.

But only a couple of years of severely diminished sunlight would still cause catastrophic population losses in both the plant and the animal kingdoms. Even a relatively short ''volcanic winter'' would be a huge catastrophe for human beings.

How many people would die if such a catastrophe happened now? It is unlikely that even half of the world's seven billion people would survive two or three years of severe hunger, and civilisation itself would take a terrible beating. Nor is there anything useful you can do to prepare for such a catastrophe, unless you are able to stockpile two or three years' worth of food for the entire world. At the moment, our global food reserve will feed the population for only three or four months.

What Dr Malfait's team discovered is that the detonation of a supervolcano is entirely dependent on the temperature of the liquid rock in the underground chamber. As it gets hotter, it gets less dense than the solid rock around it. At this point, it will behave just like an air-filled balloon or football that is held underwater, trying to pop up to the surface.

Eventually, the magma forces its way to the surface over an area of hundreds of square kilometres, expands and explodes. On average, such an explosion only happens once every hundred thousand years, but in practice it could happen at any time, with as little as a few weeks warning. Just thought you'd like to know. Sleep well.