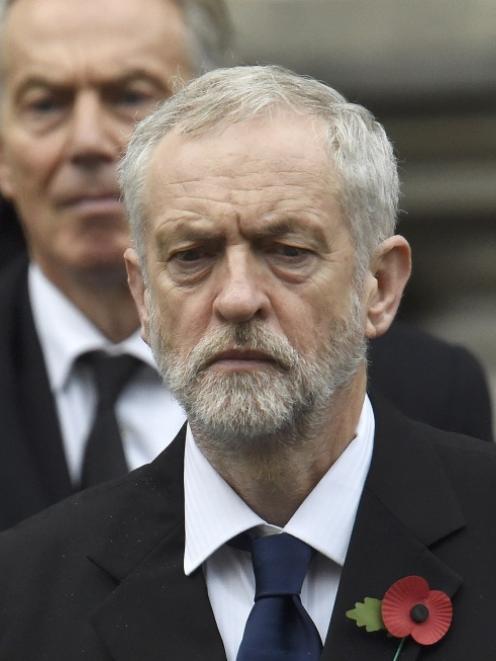 Jeremy Corbyn (front), leader of Britain's opposition Labour Party, with former UK prime minister Tony Blair standing behind him, at the Remembrance Sunday ceremony in London. Photo by Reuters.
''When people say they're never going to use the [nuclear] deterrent,'' General Sir Nicholas Houghton said, ''I say you use the deterrent every second of every minute of every day. The purpose of the deterrent is you don't have to use it because you effectively deter.''

You sort of know what he meant to say, although his syntax needs some work.

But the general's incoherence is forgivable, because it is grounded in the greater incoherence of the strategy he is trying to defend: the notion of an independent British nuclear deterrent.

Because Mr Corbyn had said he would never press the nuclear button in the (rather remote) contingency that he becomes prime minister after the 2020 election. 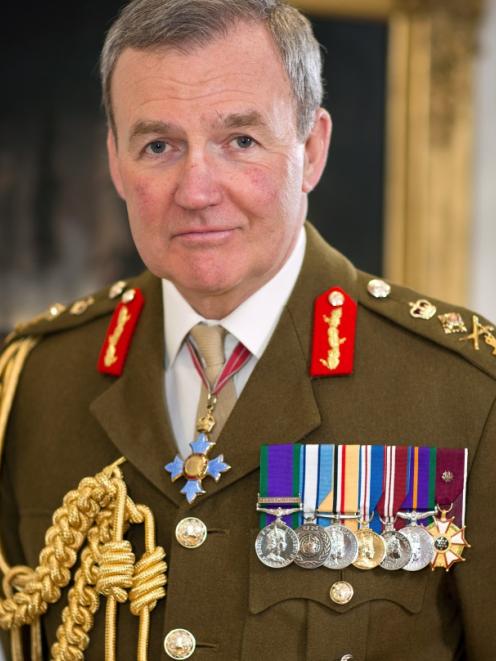 Britain's chief of Defence Staff Sir Nicholas Houghton. Photo supplied.
Indeed, Mr Corbyn has said that he would like to get rid of Britain's nuclear weapons entirely.

''There are five declared nuclear weapon states in the world,'' he told the BBC a month ago.

Now, there are a few errors and omissions in that statement.

One hundred and ninety-two minus eight is 184.

The five ''declared'' countries - the United States, Russia, Britain, France and China - were already nuclear weapons powers before the Non-Proliferation Treaty was signed in 1968, and their bombs were ''grandfathered'' by the treaty.

They promised to get rid of them eventually, but half a century later ''eventually'' has still not arrived.

The four (not three) other nuclear weapons countries, India, Pakistan, North Korea and Israel, never signed the NPT because they all had powerful enemies.

Just like the original five, they were all thinking in terms of sheer survival when they developed their first nuclear weapons.

But what Mr Corbyn failed to mention (to the great disadvantage of his argument) was that six other countries either had nuclear weapons or were on the brink of getting them - but then turned around and walked away from them.

Brazil and Argentina frightened each other into a race to develop nuclear weapons under the ultra-nationalist military regimes of the 1970s and 1980s, but they didn't really pose a threat to each other and the programmes were ditched by civilian governments in the 1990s.

Both countries signed the NPT just before the century ended.

After the Soviet Union broke up in 1991, the former Soviet republics of Ukraine, Belarus and Kazakhstan all wound up with ex-Soviet nuclear weapons on their soil.

But they had no real enemies, so they all agreed to destroy them or give them back to Russia, the legal successor to the Soviet Union.

And South Africa developed nuclear weapons in the dying days of apartheid, fearing that Cuban and Russian military help to the ''frontline states'' of Africa might grow into an all-out military assault on the white-ruled state.

Nobody developed nuclear weapons just to feel more powerful: they were all driven by fear of attack.

And when that fear vanished, as it did for some countries, they promptly got out of the nuclear weapons business again.

Logically, both Britain and France should now belong the latter group.

They both built their bombs just after World War 2 because they feared an overwhelmingly powerful conventional attack on Western Europe by the Soviet Union, and didn't trust the United States to use its own nuclear weapons to save them.

After the Soviet Union fell, they faced no threat that was even remotely comparable.

Yet they cling to their irrelevant nuclear weapons, presumably because they think that is what guarantees them a seat at the high table.

Maybe it does, but it is a very expensive way to keep a seat of such dubious value.

The military forces that Britain actually uses from time to time are being hollowed out to maintain this ludicrous deterrent (which depends on missiles leased from the United States).

It wouldn't transform the world if Britain got rid of its nukes, but it would be a down payment on what all the declared nuclear powers said they would do when they signed the NPT.

French nuclear disarmament would also be a good idea.

Like people who live on the slopes of a volcano that hasn't erupted in 70 years, we have mostly forgotten the appalling danger that still looms over us.

The Cold War ended 30 years ago but the weapons are still there, waiting for some fool or madman to press the button.

I know what you're thinking: Ukraine gave up its nuclear weapons, and now it has a real enemy in Russia.

So tell me: would you feel safer if Ukraine had nuclear weapons too?

The stakes would be a hundred times higher, and we would have been living in a terrifying nightmare for the past two years.