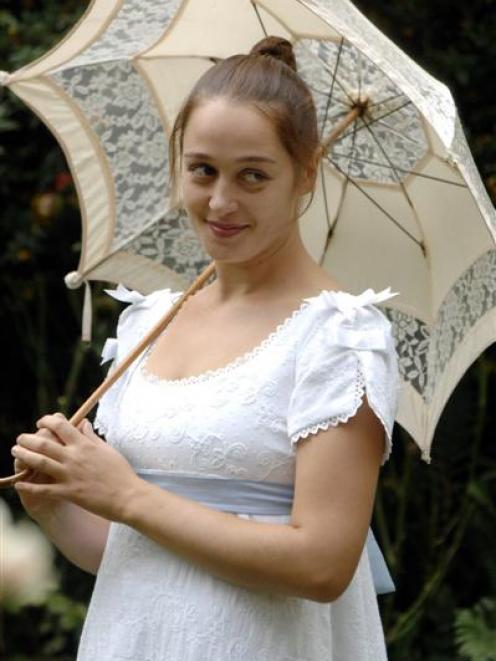 Anya Tate-Manning has the lead role in the Fortune Theatre's Emma by Jane Austen, adapted by Michael Fry and directed by Lisa Warrington. Photo by Lisa Warrington.
In lists of the most influential people of the last millennium - particularly popular about 10 years ago - Shakespeare almost invariably makes the top 10. In lists of the greatest novelists, Jane Austen is seldom far removed from the spotlight.

A friend and I fell to discussing such things because by happy coincidence we were both due to visit the Fortune Theatre - to see a performance of Emma, an adaptation of the eponymous Austen novel.

But why is it, my friend wondered aloud and somewhat rhetorically because he already had a good idea of the answer, that artists - Leonardo da Vinci, Mozart, Beethoven - occupy several such vaulted positions in their contributions to humanity on such lists?

When it is so hard to pin down, to measure, to quantify what they actually do, I enjoined.

How can we measure art? What concrete values can we ascribe to it? What's it worth? That seems to be the attitude these days, the cultural norm.

Well, there are some things you just cannot put a value on, although the "market", which makes a fetish of commodifying even art, would tend to disagree.

Once upon a time, and indeed at periods through the ages, art was accepted, indeed championed, as a necessity of civilised society.
It defies categorisation, it resists easy interpretation, it doesn't play by the accepted rules and conventions; it provokes, it challenges, it reflects, it entertains.

And theatre has always been a part of that - just ask the Greeks.

After the opening night performance - graced by some excellent performances and scored through with Austen's trademark wit and acerbic social observation - I encountered another friend and we spoke of the Dunedin City Council's draft community plan 2009/10-2018/19.

This has critical bearing on how as a community we might continue - or not, as the case may be - to experience professional theatre in this city.

A council report last year reiterated the need, identified and talked about for many years now, for a mid-sized modern, full-facility theatre. The draft community plan makes scant reference to this, and while submissions will now be before council urging correction, the city cannot afford to wait a further 10 years before initiating a meaningful initiative to address this worrying omission.

The Fortune Theatre is a Dunedin institution, but like most professional theatre enterprises in this country it lives a hand-to-mouth existence.

It is kept afloat partly by goodwill, enthusiasm, a dedicated band of volunteers in its members society, and by the seriously hard work of its management, and commitment of its board.

It began life as the dream of a group of thespians back in the early '70s. They were determined that the city should have a professional theatre.

It found digs in a 105-seat Otago Cine Club theatre at the rear of the Athenaeum building in the Octagon but outgrew this with the the hiring of a full-time acting company in 1977.

In 1978, it moved into the Trinity Methodist Church - designed by Scottish architect R. A. Lawson - where it has been "squatting" ever since.

Like other recurrently funded theatres, its grant from Creative New Zealand assists in the mounting of top-line professional productions; its grant from the city council is pretty much paid straight back to the city in rent.

I'm told the building needs a new roof; soundproofing issues, cripplingly costly to rectify, prevent the simultaneous use of the main stage and the studio space. Numerous other shortcomings of the physical space in which the actors, directors, stage managers and technicians are required to work routinely renders their efforts heroic.

In its home for 30 years now, the theatre has proved its worth. It's about time its landlord (the city) either put some capital aside to overhaul the premises or find it another home.

There are difficult and conflicting - or at least overlapping - issues with other "theatre" buildings such as the Mayfair in South Dunedin and the Regent in the Octagon (neither suitable) which must be addressed, but the answer cannot be to do nothing. Not for another 10 years.

What does theatre do? What is it for? How much is it worth? Academics write entire books about this sort of thing. Theatre is different things to different people. It fulfils a multitude of functions and purposes. It is that place in which the unspoken is articulated.

It poses questions that would otherwise remain unposed - then proceeds, in a manner of speaking, to answer them. You can't put a price on that.