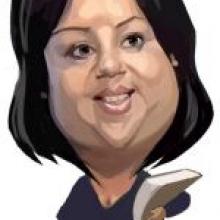 Paula Bennett
Butter would not have melted in her mouth. Given a free ride by TVNZ political editor Guyon Espiner on Sunday morning's Q&A programme, Social Development Minister Paula Bennett was all sweetness and light: the personification of compassion; the epitome of reason; the embodiment of fair-minded common sense.

What sensible citizen could not have been impressed by the level-headed empathy with which she addressed the gentle lobs on welfare policy presented by Mr Espiner? She put each one away with the precision of a smiling assassin.

It was a such a "liberal" performance it might even have tempted the rabid attack dogs of talkback land and the blogosphere - unleashed on a couple of hapless beneficiaries by the minister herself - to turn on the heels of their no-nonsense ideological benefactor.

Behind Ms Bennett's sunny Darth Vader mask there seemed a grim determination not to be moved to anything beyond "reasonableness".

I think that's because she and National's public relations minders cannot quite believe she got away with what she did - and, frankly, although it's perfectly understandable, neither can I.

There is little doubt she has. If poll ratings were taken now on the most effective/visible/admired politician in the country, she would probably come a close second to Prime Minister John Key.

There is nothing quite so popular, particularly in hard times, as a bit of good, old-fashioned, politically-incorrect beneficiary bashing - especially when it can be delivered in the direction of actual faces and names. Some part in most of us wants to cheer from the sidelines.

How dare those women go bleating to the media about the cutting of a policy - the Training Incentive Allowance - without revealing the full fecund extent of their own State teat-suckling. The public deserves to know exactly what these people get at the expense of the rest of us hard-working, scrimping, sacrificing, suffering - and working - taxpayers.

And in a generic sense, they do. It has been pointed out that many hard-working families earn less than some of these beneficiaries. When you consider the minimum wage and compare it to the whole range of subsidies and benefits available - to the tune of $16 billion annually inevitably, and rightly, there are questions.

For one, has the balance got out of kilter; what level, if any, is appropriate; why are there so many domestic purposes beneficiaries; where are all the fathers and former partners/husbands of these women; at what pecuniary point in a cost-benefit analysis does education towards a benefit-free future stop making sense?

So many questions, so few answers. Enough to make your head hurt. But, predictably, those were not the questions asked in the media storm that ensued, and those who lashed out weren't interested in such answers either.

Despite her protestations of "horror" at the subsequent vitriol directed at the two women, that is pretty much what Ms Bennett did: she lashed out.

It seems she had her parliamentary staff, or ministry officials (it is not quite clear which), get into the computer data bases of the Ministry of Social Development and access the personal files of these individuals - and then displayed their details, like trophy heads, for all the world to see.

There are two issues in this whole saga. What level of financial assistance for beneficiaries is sustainable and politically acceptable? And, how far the power of the executive arm of Government - in this case a minister of the Crown - extends over the lives of individual citizens.

Ms Bennett was quite within her rights to defend her Government's benefit cuts policies - by general reference to benefit levels.

But in using her position to access the private details of perceived opponents for personal and political gain, arguably she breached the trust of all citizens who supply personal information for purposes of government. Those citizens have a right to expect that this information will remain essentially private.

Because the breach of this "social contract" was over such a lightning rod issue, many have missed its import.

If not exactly a precedent, it is at best an unsavoury development, a blow to the uninhibited, questioning body politic - which makes certain assumptions about the nature of freedom in a democracy. Should we now expect the Minister of Finance to parade the personal tax records of those who relentlessly criticise his tax-free parliamentary business allowance?

At the very least we should be aware that new boundaries are being drawn. Ms Bennett's put-down of the two women was calculated and lethal. The message was clear. "Don't mess with me, babe... You don't know the power of the dark side."

Well now they do know. And the rest of us should be warned.