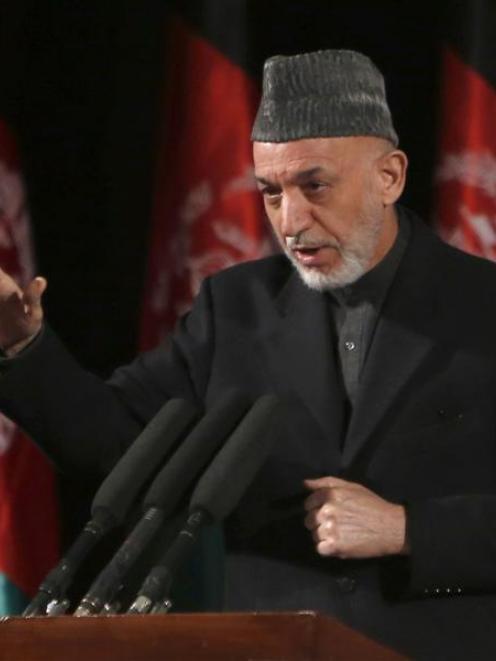 The ''foreigners'' he is talking about are the troops from the United States and various Nato countries in Europe that have been in Afghanistan for the past dozen years. They will almost all be gone by the end of next year. Can Mr Karzai seriously think that the Taliban bombs in Kabul and Khost last Saturday, which killed 19 people, were meant to get the Americans, British, Germans et al to keep their soldiers in Afghanistan longer?

If he were the leader of al Qaeda, you can imagine him saying that. It was always al Qaeda's goal to get Western military forces entangled in military occupations in the Muslim world, in the belief that that would nurture popular hostility both to the West and to the local leaders who collaborated with it. But Mr Karzai IS a collaborator, parachuted into Afghanistan after the American invasion in 2001.

He may have won the first presidential election in 2005 legitimately, but by the second election in 2009 he was so unpopular that he was only re-elected thanks to massive vote rigging, tacitly condoned by the United States. And when the Americans leave, he had better leave with them.

So what is all this nonsense about the Taliban bombs being an attempt to persuade the ''foreigners'' that they have to stay, and to ''intimidate'' Mr Karzai and his cronies into letting them stay? It can best be explained as a manifestation of the ''Najibullah syndrome''.

Mohammad Najibullah was the communist leader who ruled Afghanistan during the latter stages of the Soviet occupation and immediately after the Russians left. When the Taliban finally took Kabul in 1996, he was tortured, castrated, dragged through the streets behind a truck and then hanged from a traffic light. It can be safely assumed that Mr Karzai and his cronies, when they contemplate the forthcoming American departure, are acutely aware of this precedent.

This leads to various flailing attempts by members of the regime to distance themselves from the American occupation forces who originally boosted them into power. Mr Karzai has been increasingly vocal in criticising the Nato forces in Afghanistan, as if he had nothing to do with their presence in the country, and didn't owe his presidency to them.

Let's deconstruct that remarkable statement of Mr Karzai's. The message is that he is an Afghan patriot who is trying to make the ''foreigners'' go home, whereas the Taliban are trying to keep the Americans and their Nato allies in the country to further their own nefarious purposes. It makes no sense whatever, but what else can he say? That the Taliban are winning, the Americans are getting out and he is doomed?

He's not really doomed. Since the constitution does not allow him to run for the presidency again, he can easily leave the country for ''health reasons'' or whatever before the foreign troops depart. He must have salted away enough money abroad to live quite well in exile, as have almost all the other members of the regime. So why does he act as though he might have a future in post-occupation Afghanistan?

The Najibullah precedent is instructive here, too. The former collaborator with the Soviet occupiers stubbornly believed that the Taliban would understand that his motives had been pure, and after all he was a Pashtun like them. He refused to leave Kabul before the Taliban took over, even though numerous friends implored him to. Mr Karzai apparently suffers from the same delusions, and may eventually suffer the same fate.

This is not to say that the Taliban will overrun all of Afghanistan after the Nato forces leave. They will undoubtedly gain control of the Pashtun-majority south and east, and they will probably take Kabul. They didn't gain control of the Tajik, Hazara and Uzbek minority regions in the north of the country last time, and they may not do so after this bunch of foreigners leave either.

The likeliest post-occupation outcome in Afghanistan, therefore, is a reversion to the situation that prevailed there before 2001. Mr Karzai will either leave or be tortured and killed, as will most of his senior collaborators. Pakistan will be the dominant influence in Taliban-controlled parts of the country, and the minorities will have to fend for themselves.

If this is the final outcome, what have the ''foreigners'' been doing in the country for the past 12 years? Several thousand of their soldiers have been killed, hundreds of billions of dollars have been spent and things will be about the same after they leave as they were before they arrived - apart from the al Qaeda terrorist training camps, which were dealt with before the end of 2001.

For the Nato alliance, which has been searching for a new role ever since the collapse of the Soviet Union, the Afghan operation at least helped to justify its enormous budget. For the United States, it never made sense from any point of view. And for Afghanistan, it was merely the continuation of a disaster now more than 30 years old.