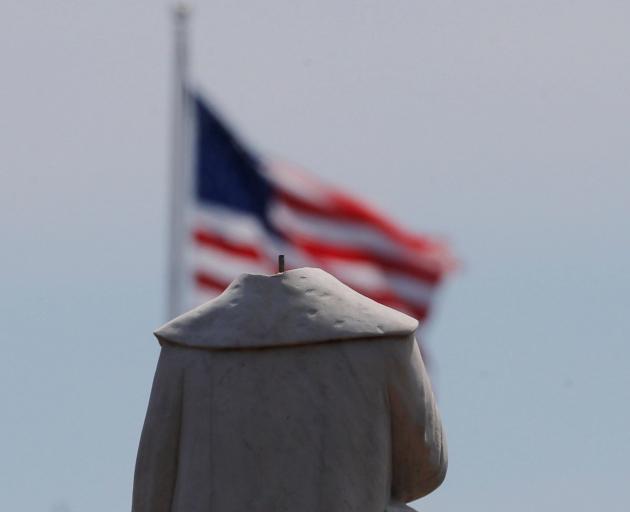 The head of a statue of Christopher Columbus was removed amid protests against racial inequality in Boston last month. PHOTO: REUTERS
All across the globe, statues commemorating the inglorious dead are toppling, writes Jean Balchin.

Edward Colston has been unceremoniously dunked in Bristol Harbour, Robert Milligan’s memorial has been expunged from the London docklands, Christopher Columbus has been decapitated in Boston, Winston Churchill has been boarded up, and Captain Cook has been vandalised (alas, not cannibalised) in Sydney.

Over here in Oxford, activists have called for the removal of the statue of Cecil Rhodes adorning the facade of Oriel College. I, a Rhodes scholar, marched in the streets too. I have no doubt that countless naysayers will point out the "hypocrisy" of my actions here.

But this issue deserves considerable time and attention, and today, I wish to dedicate this column to exploring the significance of toppling statues. I will only say that in many ways, I am not who Cecil had in mind when he imagined the recipients of his scholarship wandering the hallowed halls of Oxford. I find a wicked satisfaction in knowing right now Rhodes is likely spinning in his grave like a drill bit. 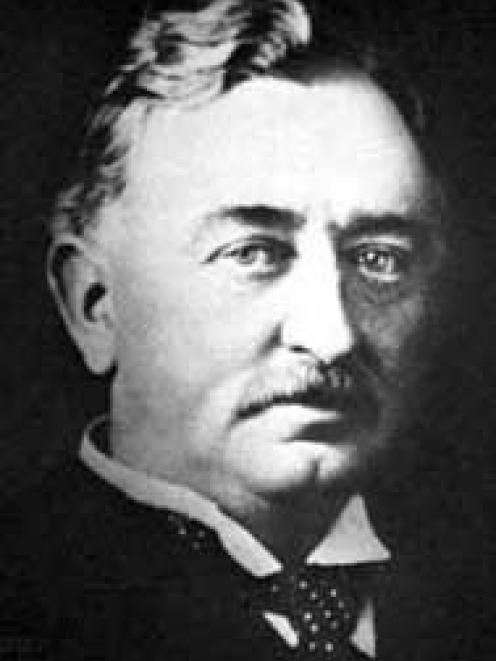 Cecil Rhodes. Photo: ODT files
As Rebecca Richards, the first Indigenous Australian Rhodes Scholar puts it, "I see the statue as different from the scholarship as the statue is largely a recognition of an individual, with his imperialist actions and reactionary views as well as his legacy, while the scholarship is an evolving and contemporary legacy that is about its contribution to people and society today."

That being said, I would welcome a change in name for the scholarship, and I look forward to witnessing and participating in the ways Rhodes Trust will challenge and review the scholarship’s history, present, and future.

This issue today, however, is about more than Cecil Rhodes. It is important to remember that this so-called "destruction" of problematic statues is nothing new. Humans have been creating and erecting monuments to glorify themselves and others for millennia. And for just as long, other people have been tearing these monuments down. Mere days after the Declaration of Independence was ratified, impassioned American soldiers and civilians tore down a gaudy statue of King George III in Manhattan. Not so long ago, statues of Felix Dzerzhinsky, the founder of the Soviet secret police force, were pulled down in Moscow’s Lubyanka Square, in 1991. I could go on.

As the saying goes, "History is written by the victors". The victors, for better or for worse, have erected the countless statues dotting the planet, in a bid to foster a specific collective memory and patriotic pride. It is most definitely time to re-examine many of these monuments. Many people argue that pulling down statues of racists and colonialists’ memorials will erase or rewrite history. The absence of these statues will presumably lead to forgetfulness about our fraught history — for example, about Britain’s deplorable role in the history of transatlantic slavery, or about the violence and disease Cook and his ilk visited upon the shores of Aotearoa.

I firmly disagree. The removal of such statues will not in any way erase history. Have we forgotten the atrocities of the Holocaust, in the absence of public Nazi memorials? Rather, the heightened awareness of these problematic statues is encouraging people to learn more about the legacy of these commemorated “heroes”.

Statues are not passive or uncritical, nor erected as educational objects. They glorify the subject and legacy, and, if elevated, imperiously gaze upon us. As the Pharaohs of old did with their pyramids, statues such as those of Rhodes and Colston function as desperate bids for immortality; a way of solidifying one’s legacy — not that the people still reeling from the devastation of apartheid and the transatlantic slave trade could forget.

If we truly wish to make these statues educational objects, why not relocate them to a museum, or a sculpture garden such as those found in Russia or Hungary, where hundreds of Soviet-era relics lie? An honest and comprehensive account of each individual’s actions and legacy should accompany such installations.

Alternatively, councils might commission artistic interventions. The street artist Banksy has proposed that the local authorities reinstall Colston on his plinth and commission life-sized bronze statues of protesters in the act of pulling it down, to illustrate and reflect upon Colston’s ignominious but well-deserved dip in the harbour on June 7. Other people have proposed building a second version of the statue that could be defaced with graffiti.

I strongly believe that in New Zealand, we ought to commission local artists — particularly local Maori artists — to rework and recontextualise statues that commemorate our statues with troubling colonialist legacies. Or, why not go a step further, and replace the countless statues of Cook, Hamilton, Nixon, or Grey with beautiful works by Maori and Pasifika artists? We need to recognise the historical marginalisation of Maori and Pasifika people in public monuments, and work towards rectifying this in an honest and balanced way.

Finally, let me say that it saddens me immensely to see so many people rail so passionately over the removal of racist statues. If only they put the same energy into protecting actual flesh and blood; the lives, interests, and rights of our BIPOC (black and indigenous people of colour) friends and family members.

Let us not continue to unreservedly and uncritically glorify symbols of white supremacy and colonial violence. Statues of racists, violent colonialists, and slave-traders normalise the past, and render the injustices perpetrated by their subjects more palatable and easier to defend. Opinions may differ as to what we do with these statues, but it is clear we cannot leave them as they stand.

Great another columnist wanting to disappear history and replace it with a glorious communist future. Rhodes now exporting cultural suicide. Sure build a new statue, using your own funds, if you can be bothered. Leave our history alone. This new movement involves breaking, crashing, deleting, destroying, not building.

Does Tinker Tailor Spy refer to the 5 communist traitors from Cambridge?

It is fiction by John Le Carre, which accurately depicts Cambridge spies as upper class, whose motives were hatred of American culture, rather than love of Russia.

I object to your description of the author as 'another columnist..for glorious communist future'. Your amydala may be clouding your customary right wing rationality.

The writer could equally be putting her energy into ending slavery in 21st century New Zealand. We are on international watch lists for people trafficking for young women used to staff our progressive sex industry.

Let's just do away with all statues; these symbols should be inclusive and representative of who we are. That said, I dont see how any of the above-listed proposals would materially improve the lives of African Americans, indigenous people or other disadvantaged groups. We memorialise people because their lives were important, and made a lasting contribution to what we have become. History is not a morality play. There are no “goodies” and no “baddies”. We all care about the important underlying issues, such as fighting racial discrimination and promoting the opportunity to all, we shouldn’t allow our culture wars over statues and symbols to dominate our discourse and they are. History is a living thing. History has changed the narratives about the our culture. But vocal advocacy of a politically correct version of the past should not intimidate us into silence especially for those with differing opinions. We cannot right the wrongs of the past by trying to erase the past. An angry mob can throw a statue in the sea, but it cannot change the past, whatever its members may think, it cannot do anything to change how the historians of the future might see them, and their actions.

'Politically correct' is a term applied to disagreeable fact. It's why a good History curriculum will be disputatious.

These statues never bothered you before, why now?. Is it perhaps because you too have jumped on the perpetually offended bandwagon?.

Never bothered the author before? How on earth would you know that?

Maybe because they never complained until now? (insert eye-roll here ... )

“ All across the globe, statues commemorating the inglorious dead are toppling.”
This is NOT correct !!!
It is NOT happening all across the globe. It is only happening in Western countries with liberal democracies.
It is NOT being driven by a mass movement of a population that has suffered decades under tyrannical rule as was the case in the old Soviet Union or in the Middle East when dictators where toppled.
What we are seeing is a small university educated minority acting out of self righteousness indignation because they have been indoctrinated in victim culture and have NO appreciation of the privileged life they live.
They have to dig back hundreds of years to find their grievances. NOT yesterday, like most of the worlds population alive today.
Instead of focusing on the processes and progress our society has made over the last hundred years and celebrating our successes, their hearts are filled with bitterness.
Instead of building on the liberal democratic they what to install their own tyrannical mob rule.
Tolerance, learning, debate, reflection, understanding are NOT values they hold dear.
Blame, guilt and punishment based on race are their objectives.

No man is an island of perfection, all have faults, but the fact that a person has been commemorated surely means something about that person--and something very derogatory about vandals who would wantonly destroy such an effigy.

Ah, the minority, sanctimonious PC Liberals strike again. Dumbing down the masses one statue at a time. Most of these figures have done more good for humanity than not, but they refuse to see or acknowledge that. I think that the world has had more than enough of their own woke virtue signalling culture as well.